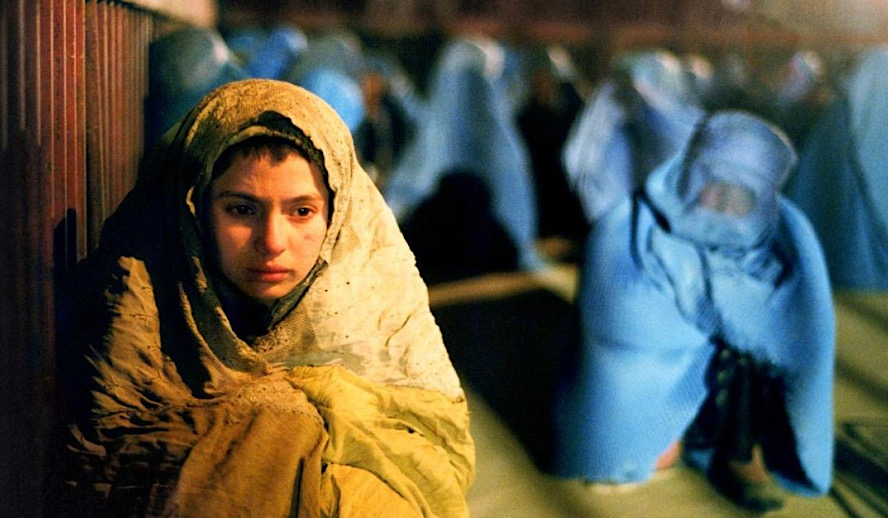 Shot on location in Kabul with non-actors found on the streets, Siddiq Barmak’s ‘Osama’ (2003) is a powerful, modern distillation of neorealism and vérité that verges on documentary, telling the story of a girl’s struggle to survive in Taliban-controlled Afghanistan–on the brink of starvation, her family decides she must disguise herself as a boy to find work.

It was the first film to be shot entirely in Afghanistan following the Taliban’s ban on filming in 1996 and has subsequently maintained the title of highest-grossing Afghan film of all time, topping the chart with a worldwide gross of $3,888,902 against a paltry budget of $46,000. While these relatively minuscule figures speak to the severely stifled development of arts in Afghanistan, they also emphasize the magnitude of Barmak’s accomplishment.

‘Osama’ is constructed with a mature acumen that seems to naturally inherit the language of its cinematic predecessors–it masterfully conveys an all-encompassing sense of quiet despair that looms over every downtrodden inhabitant of the war-torn city, where life is the hard-earned reward for a relentless daily struggle. It presents these deep tragedies without sentimentality, but with an austerity that supports the film’s grim realism.

The girl we follow (Marina Golbahari) remains nameless throughout, but is called at one point, The title ‘Osama’ will immediately conjure an image of Osama bin Laden, and those unfamiliar with the film might assume that he plays a significant role. Though that may be the case allegorically, bin Laden is only explicitly mentioned in the film once, and the name “Osama” is only said one other time–when the other boys at school hound the girl for “his” name, Espandi (Arif Herati) declares that it is Osama.

That the title evokes bin Laden is no coincidence, and it seems like that very perception and the assumptions we make are more important to the film than bin Laden himself–this is reinforced in the opening scene where Espandi, a cheeky street urchin, swings a bucket of smoking incense and talks to the man behind the camera, a foreigner who he calls a “rich man.” Espandi asks the cameraman for a dollar and is obliged–a hand reaches out from behind the fourth wall and hands the boy a crumpled American dollar.

In these ways, ‘Osama’ is not only a film about the wretched living conditions under the Taliban but a reminder to the rest of the world that the region isn’t defined by fanaticism and terrorism. It blurs the line between fiction and documentary, ultimately effective in both regards–its narrative drama is heightened by realism, while its social commentary is made more effective by poignant storytelling.

Women Under the Taliban

The foreign cameraman gives Espandi another dollar and their attention turns toward a massive crowd of protesting widows–hundreds of women wearing light blue burqas demanding they be granted the right to work. A pumpkin salesman spills his produce as he hastily leaves the scene, and we see that the bystanders’ fears anticipate the swift arrival of the Taliban.

Ebrahim Ghafori’s cinematography captures the magnificent chaos of a disorganized stampede as the body of blue burqas disperses, frantically running to escape capture and death. The stark sound design complements the sense of urgent panic, women’s screams and earthy rumbling punctuated by occasional spatters of gunfire.

One perceptible contributing factor to the circumstances behind the protest (aside from the Taliban’s misogynistic laws) is that the men died in either the Soviet-Afghan War or the Afghan Civil War (through which the Taliban seized power and which continues to this day).

The women who lose their male relatives no longer have a breadwinner, but are prohibited by Taliban law from having jobs themselves–consequently, women without men under Taliban law are caught in an existential catch-22. Our protagonist and her family find themselves in that predicament and decide that their greatest chance at survival would be to disguise her as a boy in order to find a job. However, the plot thickens when the Taliban drafts all the local boys into the madrasa, a religious and military school used to train and indoctrinate future soldiers.

By 2003, it was far from a unique or novel concept for a film to bear attributes of neorealism or cinéma vérité, both of which had long established themselves into the filmic language and canon–‘Osama’ warrants a discussion on this topic not only because it utilizes its stylistic choices to great effect, but also because it so strikingly captures the spirit of archetypal Italian neorealism. The use of modern vérité techniques only amplifies the sobering realism already present in the film.

Passing references to “the Kabul wars” and “the Russian war” serve as verbal reminders that our story takes place in a war-torn Kabul, but the setting is self-evident. In one scene, where the girl and her mother are being escorted home by a man on a bicycle, they ride together in a wide shot along an empty road, smoke rising from the rubble and wafting across the sky. As they ride along, the girl’s mother asks the man if he could accompany them the next day, and he tells them he cannot. In place of music, the sound of crackling embers accompanies the dialogue.

There is a notable lack of music used throughout the film, which reflects the fact that the Taliban had also banned music under their rule, among a plethora of other oppressive restrictions–I doubt that the choice not to use music was so direct a reference to this phenomenon, but rather a natural expression of the muted lives that these people lead. In terms of sound design, the pervasive silence between words amplifies the grim realism present in every line of dialogue.

That Barmak cast his actors by picking people off the streets of Kabul, where he also shot the film, lends the film an inimitable authenticism as it did in ‘Bicycle Thieves’–Golbahari was discovered begging on the street. It’s a fascinating and important glimpse into a world we don’t see much of, but the neorealist casting adds a layer of sadness outside of the film itself.

Marina Golbahari, for instance, lives with her husband in an asylum shelter in France having received numerous death threats after being photographed at a South Korean film festival without a head covering.  ‘Osama’ put a face not only to the struggle of women under oppressive regimes but to the people that have had their homes ravaged by war and continue to struggle every day.