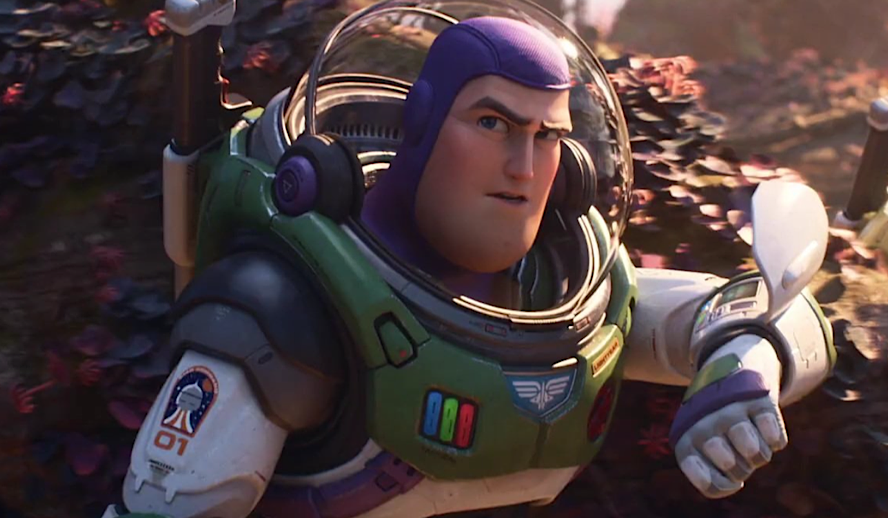 “To infinity and beyond” are the iconic words of our favorite space ranger. ‘Lightyear’ is a look into the backstory of ‘Toy Story’s’ Buzz Lightyear. The film was directed by Angus MacLane, who has taken part in several other Pixar films such as ‘Finding Dory’ and ‘The Incredibles’. It is essentially the film that Andy watched that caused him to fall in love with Buzz. ‘Lightyear’ is an enjoyable watch for the family as it allows us to reminisce about our favorite group of toys. This new version of Buzz is oftentimes straining as his inability to communicate with a team is frustrating, but his development as a character leads us to understand who he was as Andy’s toy.

The movie opens up with Buzz Lightyear (played by Chris Evans) and his commanding officer, Alisha Hawthorne (played by Uzo Aduba) exploring new terrain on a foreign planet. They are both part of the Galactic Rangers of Star Command which is an organization devoted to exploring all aspects of deep space. Throughout their journey, Buzz captures the same mannerisms we have come to know and love. We see him recite notes in his mission log in which Alisha teases him of.

He then goes on to discuss his dislike for newbies on the force as he doesn’t find it necessary for him to team up with anyone — which is an evident trait that we are aware of from his introduction in the first ‘Toy Story’. This mindset of his refusal to work with others led him to cause an accident (not necessarily fatal) which endangered him and a group of people as they are forced to stay on this threatening planet. Not to point fingers, but Buzz was the one to blame for this incident. Due to this, the group of rangers are forced to temporarily make life on the planet until they find the needed materials to take them back home.

Rather than fighting off violent aliens, Buzz tries to fight off the large wave of guilt that he has put on himself. He understands that he was at fault and he tries to constantly right his own wrongs. A good majority of the film consists of Buzz trying to solve their problem as he figures out ways to get them back home. He attempts to fly into space while circling the sun to land back at the base in hopes of figuring out a strategy that will take them to their home planet. Yet with every attempt, he makes to go into space, Buzz misses years of his life because of how quickly he moves through the speed of light. Alisha becomes a telling sign of the time he misses.

Each time he comes back from space, Alisha reaches new stages within her life that indicate how much Buzz misses. From being engaged, to having a child, and up until her death, Buzz misses out on more than 20 years of real-life experiences. It is a harsh reality that Buzz doesn’t recognize until he meets Alisha’s granddaughter, Izzy Hawthorne (played by Keke Palmer). Izzy introduces him to her team of Galactic Rangers: Mo Morrison (played by Taika Waititi) and Darby Steele (played by Dale Soules), who are all comically inexperienced. The group tests Buzz’s ability to work as a team and forces them to realize how beneficial it is to work together. As Buzz teams up with the Galactic Rangers and a robotic cat named Sox (played by Peter Sohn), they help each other in figuring out how to defeat villains like Zurg (voiced by James Brolin) and unexpected challenges along the way.

LGBTQ+ representation is a rare thing in Disney and Pixar films. They have a long history of refusing to portray LGBTQ+ characters. ‘Lightyear’ made noise as it included a same-sex kiss in the first 30 minutes of the movie. This was met with some resistance, especially from inside the studio. Recently, an Oklahoma theater posted a notice warning viewers of the same-sex kiss in ‘Lightyear’. The sign said, “we will do all we can to fast-forward through that scene, but it might not be exact”. The theater was met with outrage as the sign was completely insulting and bigoted. Not too long ago, Disney was criticized for their take on Florida’s “Don’t Say Gay” bill. It was a bill that limits the discussion of LGBTQ+ communities within the school system.  It bans education on sexual orientation and gender identity. The Walt Disney Co. took the heat for staying silent and not taking a public position in regards to the bill. Making no public comment is as loud as making a statement. The quick kiss in ‘Lightyear’ was almost Disney’s way of trying to save face for such backlash. If a 2-second kiss leaves certain viewers outraged, then we as a society will never make progress.

Is Lightyear Worth the Watch?

‘Lightyear’ as a stand-alone story is enjoyable. It understands the restraints of the character’s origin story in which they try to go above and beyond with. The thrills of action are enticing to watch as the scenes with the exploration of space are exciting. What drives the film home is the perspective of nostalgia that has the audience grappling onto. Although there is no distinct call back to the original ‘Toy Story’ characters, the remembrance of Andy and the nod to Buzz’s personality is a heartwarming element of the film. There are elements that could be further explored such as Buzz’s relationship with Alisha as the film quickly made it clear that it is a Buzz-focused movie.

The film can sometimes be uninspiring as the audience can have difficulty empathizing with some aspects of his character. Chris Evans’ voice acting can sometimes be straining but redeems himself with his delivery of quick comedic one-liners. The film’s message of working with a team is wholesome and heartwarming which makes it a valuable lesson for parents to teach their kids. ‘Lightyear’ is available to watch in theaters.