‘Lightyear’: To Infinity and Beyond ‘Toy Story’ 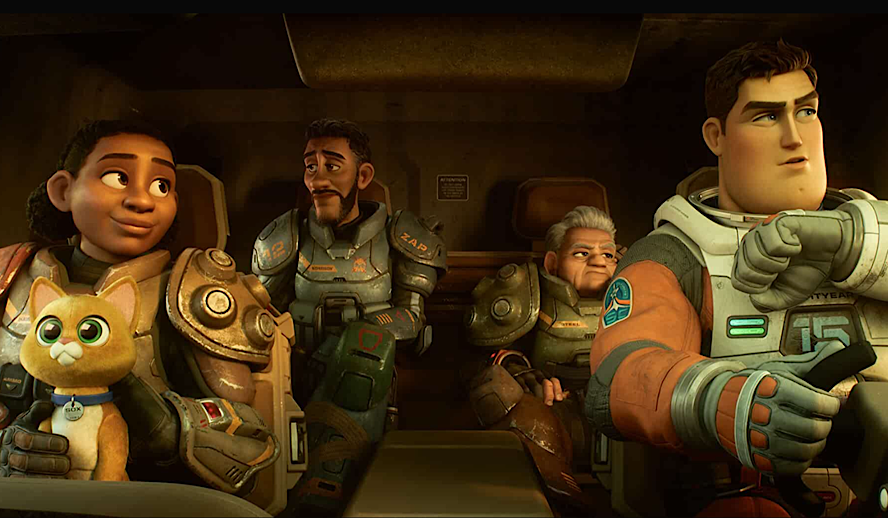 The original ‘Toy Story’ was released in 1995 and has been a childhood staple ever since. The premise is simple and interesting; when there are no kids around, toys come to life. It was fun, and easy for kids to imagine their own toys have lives outside their playtimes. However, when you really think about it, things get interesting. Buzz and Woody, as well as the other toys, come from other media. Woody from the fictional television series Woody’s Roundup, and Buzz from the then fictional film ‘Lightyear’. The toys that Andy owns are one of many. So, what happens when we look into a different Buzz?

In the original ‘Toy Story’, Andy receives a Buzz Lightyear toy for his birthday. At first, Buzz doesn’t understand that he’s a toy and acts as if he is living in the movie that the toy is based on, ‘Lightyear’. After seeing a commercial on the TV, Buzz realizes he is a toy, but this isn’t before we catch a glimpse into the content of the movie, including a world of rockets and aliens. While the toy Buzz cannot fly, the Buzz from the movie can; The toy Buzz can’t pilot a rocket, movie Buzz can.

So, it’s clear that the Buzz we knew from ‘Toy Story’ and the Buzz from the original ‘Lightyear’ movie is not exactly the same. ‘Toy Story’ Buzz is, just that, a toy based on a movie character, ‘Lightyear’ Buzz is the character himself. Now, 27 years later, we get to see the movie that Andy saw before that one fateful birthday.

Buzz Lightyear and his commanding officer, Alisha Hawthrone, both space rangers, land on a planet called T’Kani Prime. They realize the planet is habitable and begin exploring, but soon into their exploration they discover hostile plant-like aliens and are forced to retreat. They are unable to escape after Buzz damages their aircraft, so they, along with their team, build a colony on T’Kani Prime while they prepare to rebuild and return home. When they finally create a fuel that may allow the rangers to reach superspeed and travel intergalactically, Buzz volunteers to test it. The test is unsuccessful and it’s revealed that although Buzz was only traveling for four minutes, the speed he traveled meant he was gone for four years of T’Kani Primetime.

Buzz, blaming himself for stranding the team in the first place, continues testing fuel sources, sacrificing time with his loved ones. With each test, more years pass, until Buzz goes to visit Alisha and learns that she, along with her wife, have passed away. Alisha’s replacement, Commander Burnside orders Buzz to stop his tests, as the colony on T’Kani Prime is developed and people will stay. Buzz, however, disobeys these orders and completes a successful test, alongside his robotic feline companion, Sox. During his final test, 22 years have passed and T’Kani Prime was invaded by robots called Zurg. Buzz, Alisha’s adult granddaughter Izzy, a convict named Darby, and a new recruit Mo must defeat Zurg and return home.

A Shift in Tone

When ‘Toy Story 3’ was released in 2010, many were surprised by the darker tone of the film, as Andy’s toys were mistakenly donated and tensions rose. The villain of the film, Lotso, was surprisingly maniacal in comparison to the rest of the series. It was an unexpected shift. “Lightyear’ blows ‘Toy Story 3’ out of the water with the continuous obstacles, failures, and heartbreak that Buzz faces. Alisha’s death hits hard and the audience experiences the grief right along with Buzz, missing out on her engagement, wedding, and growing family and skipping right to old age.

Buzz spends the film grief-stricken and constantly dealing with blaming himself for the colony on T’Kani Prime. Even when other characters are happy in the colony, falling in love and starting families, Buzz isolates himself and can’t connect with his peers. It isn’t a sad film, per se, but the themes and tones are definitely heavier than we’ve seen from other ‘Toy Story’ installments.

Buzz Lightyear has been a beloved character for decades but this is an entirely new take on him. In the original series, Buzz was voiced by Tim Allen, but in ‘Lightyear’ Chris Evans stepped into the role. Evans was the only actor that Pixar considered for the role during pre-production, and for good reason. His performance as Buzz was true to the Buzz we previously knew but still had a sort of uniqueness that was necessary for differentiating the toy.

The new characters are all hits, especially Alisha. The beginning of ‘Lightyear’ is reminiscent of the beginning of ‘Up’, time passes rapidly as a strong emotional bond is built between the characters, but also between the characters and the audience. Even though Alisha isn’t there for long, her presence is felt throughout. This meant that Keke Palmer had big shoes to fill as Izzy, filling the emotional role that was once filled by Alisha, and she was successful in doing so. Bill Hader, James Brolin, and Taika Waititi also shine in their voice roles.

The story is touching and, although sad at times, heartwarming throughout. But the story and the characters aren’t the only things making the film beautiful. There were a handful of scenes and shots that made me forget I was watching animation and appreciate the cinematography as if I was watching a real space film. The visuals were absolutely breathtaking. At times I was reminded of ‘Spider-Man: Into the SpiderVerse’, an animated film with a strong artistic style and elaborate, artistic cinematography, and any film that can be compared to ‘SpiderVerse’ is a good film in my book.