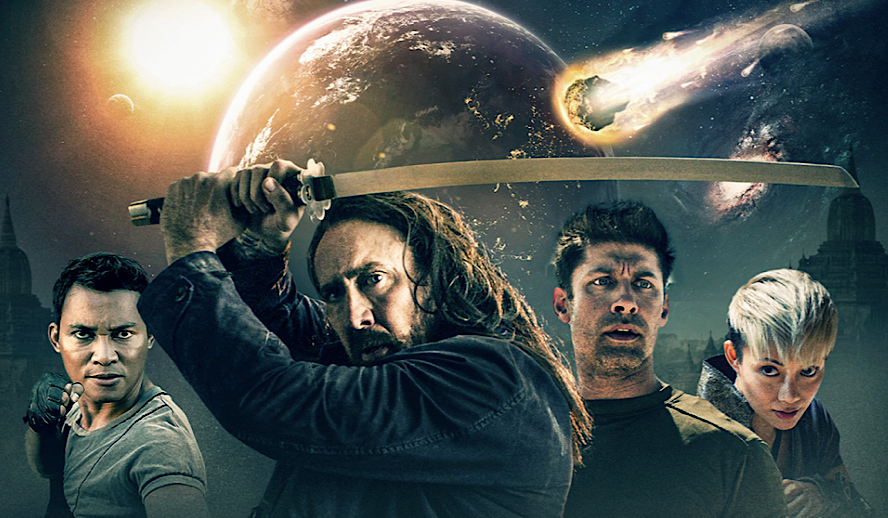 Shoot For The Comets

New to Netflix this past weekend is the sci-fi comic book adaptation ‘Jiu Jitsu’ starring Alain Moussi, Frank Grillo, Nicolas Cage, JuJu Chan, and Tony Jaa. The film is directed by Dimitri Logothetis, the filmmaker behind Kickboxer: Vengeance, who also penned the comic the film is based on with co-writer Jim McGrath. The film follows Jake Barnes, played by Moussi, as he goes toe-to-toe with an alien warrior that arrives every six-years when a comet passes over Earth to challenge the human Jiu Jitsu warriors to battle.

This film is very ambitious in its production, specifically with its camera and stunt work — unfortunately, when shooting for the stars the film doesn’t always make it. The film has some nuggets of good ideas and potential but overall, has too many aspects that needed improvement for me to be satisfied.

‘Jiu Jitsu’ – A World of Warriors

To the credit of Logothetis and McGarth, ‘Jiu Jitsu’ has a lot of effective world-building. Conceptually there are a lot of interesting ideas about the alien warriors and their relationship to the Jiu Jitsu warriors that I would’ve liked to learn more about — the same goes for many of the characters. This film has an overabundance of characters and with the short runtime of 102 minutes, the script struggles to find the time to justify that many characters. The lead, Alain Moussi, is the conduit for the audience to learn information and guide us through the story. The issue with Moussi’s character for me was the lack of characterization of him, as audience members we don’t get the chance to learn much about him as a human being other than what is inside the film. Fleshing him out and giving him a more compelling arc could’ve greatly improved his character.

This is a theme with all characters in the film. Nicolas Cage, of ‘Adaptation’ and ‘Mandy’, and Frank Grillo, of ‘Captain America: The Winter Soldier’ and ‘The Purge: Anarchy’, are both great actors, so it is a shame that the script didn’t utilize them to their fullest potential. Cage is known both for his dramatic roles, such as ‘Adaptation’ and his over-the-top acting moments, ’Mandy’. ‘Jiu Jitsu’ keeps him in this limbo of not being a completely dramatic role nor letting him loose and having Cage have fun with the role. Committing to either option would have elevated both his character as well as the overall film.

Grillo is good in the role of a Jiu Jitsu warrior but is not given much to do outside action sequences. Both Grillo and Cage don’t get enough screen time or character depth to work with within the film which is disappointing given their level of talent. The alien villain of the film, while aesthetically intimidating, has little personality for the audiences to digest which is a shame given the interesting backstory of his character. Many of the other background characters feel unnecessary, many of their storylines leading to nothing more than exposition. If the filmmakers had found more creative ways to justify some of the characters in the script it would have worked, but as is the film feels cluttered with characters that have no purpose in being in the film.

The filmmakers deserve credit for the ambition of this film, they were not afraid to take risks and be different which is commendable. Unfortunately, not all risks pay off. The film is very stylistic and commits to this style. The production design of the film was very impressive, the Asian jungle had a very ‘Predator’ feel to it — there is even a bit of an homage to Arnold Schwarzenegger’s ‘Predator’ with POV shots of the alien’s thermal sight. The film also pays tribute to its comic book origins with cuts to hand-drawn comic panes that mark chapters in the film. I thought this was a nice touch that kept the film feeling tongue-in-cheek which worked to differentiate itself from other martial arts films.

Lighting is used very well in the film, especially in some of the earlier scenes, creating interesting visuals. The stunt work is the highlight of the film. Moussi, as a stuntman himself, employs his physicality into the role and sells it. All the actors committed physically to their role and the martial arts work on display is nothing short of incredibly impressive. The way the actors utilize both their bodies and props allows for the sequences to feel like a spectacle.

The camerawork, however, was a mixed bag. Logothetis and his cinematographer, Gerardo Madrazo, take a lot of risks and try to push the bounds of how they can show the action on the screen. Sometimes this is effective, there are a lot of slo-mo and quick push-ins that work. Many of the action sequences are shot in what is meant to look like one-takes which lets the viewer take in and appreciate the stunt choreography. Other times the camerawork can become distracting and disorienting, there are many instances of shaky-cam where it was hard to tell what was happening on screen. For one sequence, the filmmakers decided to use POV shots à la ‘Hardcore Henry’, an action film that was shot entirely in 1st person POV.

Madrazo tries to innovate the style by midway through the sequence pulling you out of the POV and then back into it. This happens multiple times and I found it to be very distracting, pulling me out of the movie every time. There is another sequence that has the camera mounted to the chests of the actors, getting a straight-on view of their faces that are very out of place. Often the action sequences feel like action for the sake of action without any repercussions in the script — adding some purpose and dramatic weight in the writing of the scenes could have improved this. I would never condemn a filmmaker for taking risks and trying to innovate, but risks come with a territory, and unfortunately not all of them paid off for this film — all the props in the world for them for trying though.

Sometimes You Miss The Mark

Some other issues that popped up in the film were some odd editing choices. The filmmakers decided to implement some discontinuity editing in some of the early sequences that had me confused as to the space the characters were existing in. Editing it more traditionally or not breaking the 180-degree rule may have alleviated this issue. The special effects were up and down, again I applaud them for being ambitious with the sci-fi visuals they attempted to have but the budget fell short of allowing them to pull it all off seamlessly. For an R-rating, the film is rather tame.

Related article: Guns, Muscles, and Kung Fu – The 1980s and the Birth of the “Action Movie” and “Action Hero”

Some scenes have a fair amount of blood, but there are many times that the film cuts away from gore or violence which felt odd. There is little language in the film which also felt out of place for the tone. The film could’ve taken its R-rating much further, hammering home the violent fun of the film, or should’ve rolled it back and committed to a PG-13 rating. In its current state, the film feels just too violent to be PG-13 but does not take advantage of the R-rating leeway.

‘Jiu Jitsu’ had a lot of potentials and what does shine through in the film is the filmmaker’s passion for martial arts. Unfortunately, far too many elements come up short to enjoy the movie on more than one viewing. While there is great stunt work on display and creative risks in the cinematography, the story and characters feel too bland to support the visuals and I found myself checking out at points when I should’ve been feeling wrapped up in the story. If you are a fan of martial arts films and great stunt choreography, you will probably enjoy the film but as someone who enjoys a good story above all else, I finished the film feeling unfulfilled.

You can check out ‘Jiu Jitsu’ on streaming on Netflix today and is available for purchase or rental on Amazon Prime Video, Google Play, Vudu, YouTube Movies, and wherever else digital films are sold.

Nicolas Cage’s next project, ‘Pig’, starring opposite Alex Wolff is completed and waiting for release. Frank Grillo’s next project, ‘Once Upon A Time In Staten Island’, co-starring Naomi Watts and Bobby Cannavale is slated to release later this year. Alain Moussi’s next project, ‘Kickboxer: Armageddon’, is still in pre-production.