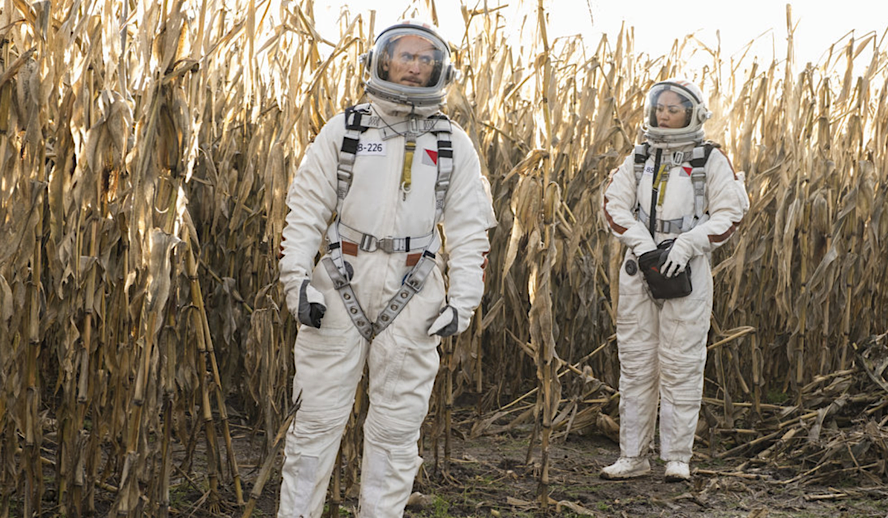 If you’re looking for a new mind-bending and deliciously captivating series to get sucked in to but are hesitant to allow yourself the investment, rest assured NBC’s newest sci-fi drama ‘Debris’ is not one to disappoint. ‘Debris’ offers viewers paranormal elements, two excellently raw lead characters, and the urgent quest to discover the dangerous remains of a demolished spacecraft that have fallen to earth. Nowadays, viewers are hesitant to spend the time falling in love with a show just to have it cancelled after one season with hundreds of unanswered questions. But with the strength of the material and the prestige of the show-runner, ‘Debris’ is bound for success for those patient enough to wait each week for a brand new episode.

First premiering on NBC March 1, 2021, ‘Debris’ follows the phenomena that followed three years after footage of a demolished alien spacecraft was found traveling through the solar system. For the past six months, fragments from that wreckage have descended to earth’s Western Hemisphere. Former CIA agent Bryan Beneventi (‘Snowfall’ and ‘Westworld’s’ Jonathan Tucker) and British M16 agent Finola Jones (‘The Magicians’’ and ‘Ant-Man and the Wasp’ Riann Steele) are forced to team together in the American-British task force called Orbital. Their mission is to investigate this debris which has created strange and sometimes lethal interactions to humanity. ‘Bloodline’s’ Norbert Leo Butz plays Craig Maddox, Beneventi’s boss and father figure who shares poignant information with Beneventi regarding his partner, which Maddox demands be kept a secret.

As if trying to wrangle and investigate the mystifying debris isn’t taxing enough, Brian Beneventi is coping with post-traumatic stress disorder from his past experiences during combat in the Special Forces and Finola Jones is grieving the loss of both her parents. Her father also had a significant tie to this case as he was the first scientist to uncover the debris, to begin with. The team’s search for these mysterious pieces is heightened as they are aiming to prevent the debris from ending up in the wrong person’s hands as corrupt individuals have begun searching for the debris to sell for a hefty amount of cash on the black market. The race for Orbital to locate these pieces is also to prevent more people from winding up dead.

J.H. Wyman is the Brains Behind the Madness of ‘Debris’, With a Hefty Background of Science Fiction Projects Under His Belt

J.H. Wyman serves as the show’s creator, writer, and executive producer. Wyman is no stranger to the world of science fiction as he has previously graced audiences with 79 written episodes of ‘Fringe’ and the brains behind FOX’s series ‘Almost Human’. If anyone was given the task of creating the next hit sci-fi show, he clearly knows how to draw in an audience and make a show flourish. Previously working within the sci-fi genre has given Wyman the groundwork to make this show succeed where other similar shows have fallen short and subsequently been cancelled only after a season or two. Wyman has thought about all the working parts that would allow this show the prosperity it deserves. The first step was casting the perfect actors to fit the roles.

Jonathan Tucker is a devoted actor with an extensive resume to back up his impeccably grounded performance. And English actress Riann Steele is also no stranger to the small screen with a wide range of television credits. She has an extensive hand in the arts after studying at London’s Arts Educational School graduating with first-class honors. In an article Wyman had with Collider, they reported, “Wyman talked about how the visualization of the character on the page evolves as the actors step into their roles, the thematic elements he was looking to explore, how far ahead he’s thought about the story he’s telling, figuring out the alien debris, what he’s learned from success and failure, and finding the right balance between the alien and the human.”

This show is prime for open possibilities. The more and more people discover these mysterious fallen pieces of spacecraft the consequences will continue to heighten. The strong chemistry from Steele and Tucker in the pilot alone also begs the question – if their characters might find themselves as more than partners in later episodes. And when will Finola find out that Bryan has been withholding a massive secret from her involving her father? One that would change life as she knows it and possibly the trajectory of their mission. While all are enticing, are these factors alone enough to keep viewers engrossed week after week?

While the world of television is often cruel and cutthroat with countless amounts of shows premiering each day on hundreds of platforms it is daunting to choose which ones to become invested in. This is especially true considering shows get cancelled as quickly as they are green-lit. I’m here to tell you ‘Debris’ is a series to have faith in. Considering J.H. Wyman’s involvement with the project and his past success in this tricky genre, it is certain that this juicy show is one you’re not going to want to miss. Even Jonathan Tucker was first to report to Yahoo that ‘Debris’ has many mind-blowing twists and turns to come and the creators have a clear direction in where this show is headed.

Stream the first two episodes on Peacock’s and be sure to catch the all-new episode airing Monday, March 15 on NBC.