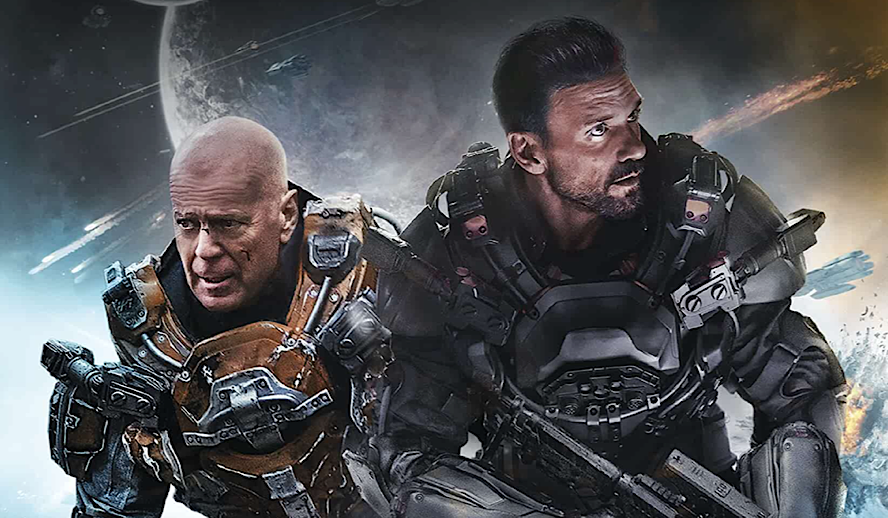 Veteran actor Bruce Willis’ newest movie ‘Cosmic Sin’ is a sci-fi story about a group of soldiers on a secret mission to stop a war before it can even start. ‘Cosmic Sin’ is director Edward Drake’s third feature film and stars Frank Grillo opposite Willis. Set in 2524, the premise of the movie revolves around a group of soldiers tasked with dropping a bomb on an alien-inhabited planet. Among the members of the team are General James Ford (Willis), a man who was dishonorably discharged after killing over 70 million people, and the mastermind behind the squadron (Grillo). Together they and their men must wipe out the aliens before they infect everyone on Earth, a seemingly impossible task. Still, the team is determined to try and set out on this dangerous mission.

The World of ‘Cosmic Sin’

The setting of ‘Cosmic Sin’ is oddly reminiscent of older sci-fi movies (‘Alien’, ‘Predator’) in the way it approaches the male versus female dynamic. When the team, or Alliance as it’s referred to, is assembled all of the men seem on board to bomb a planet. None of them seem morally conflicted or somewhat hesitant on how much violence they’re about to inflict. Instead, the only ones who show some type of empathy are the women and even then, it seems they’re more concerned about their conscience than the possible lives lost. For instance, one technician is worried that her tech will be used to hurt people, but even her argument is flimsy and is forgotten within minutes by the men.

Unfortunately, ‘Cosmic Sin’ resorts more often than not to sexist jokes. Along with that, the world of the movie doesn’t feel real. It’s supposedly 2524 but nothing has really changed on Earth, save for the addition of robot bartenders and flying cars. ‘Blade Runner 2049’ completely reimagined their world, and it’s only set 30 years from now. If only ‘Cosmic Sin’ which is set 500 years from now could have done the same.

What ‘Cosmic Sin’ lacks in production design, it makes up for visual effects and well-choreographed battles. Fight sequences are colorful and action-packed and the costumes are done extremely well. The Alliance is all dressed up into armor reminiscent of the video game Halo, complete with pads and reflective lights. The shots in space are beautifully composed and some even look like paintings. In one scene, for example, an exploding planet is seen with an extruding ring of bright, cerulean light. Other scenes like the introduction to Willis’s character where he sits in a bar across from a robot bartender, and when Willis and Grillo explore a forest, are visually pleasing. The film is made up of a lot of aesthetics that remind the audience of early 1990s films like ‘Star Wars’.

Also, Grillo puts on a brilliant performance, although he has much less screen time than Willis. The role of General Ford is one that’s comfortable for Willis, a hard-edged military man who lives his life in the morally grey. It’s a typecast role for Willis, but he manages to bring another level to the role.

The Importance of Science Fiction

Another thing ‘Cosmic Sin’ does right is continuing the themes of the science fiction genre. Beneath the aliens and dramatic battles, there are a lot of morally conflicting questions posed. Why is humankind so obsessed with expansion, especially through violent means? Does a person’s past forever dictate their true character? Where do we draw the line between good and evil? These are only some of the broader questions that are posed by Drake and his co-writer Corey Large. Cinema has always used genre films, such as sci-fi or horror, in order to pose questions to audiences that might not want to watch a drama. More niche film genres, like sci-fi, are important in order to appeal to different crowds of people. As well as that, sci-fi films are often extremely layered because they ask bigger questions about morality and humanity. Themes that might appear in a movie like ‘Cosmic Sin’ aren’t often asked in a movie like ‘The Wolf of Wall Street’.

Visually, sci-fi films are defined by their portrayal of things that aren’t widely accepted in modern science, like aliens or time travel. Also, they usually reflect on political or philosophical issues and feature clashes between familiar images (humans) and aliens. As well as that, many sci-fi films combine with the horror genre like Alien.

Exploring the 40+ Year Career of Willis

Bruce Willis first began acting in productions off-Broadway in the 1970s before moving to screen acting in the early 1980s. He first achieved fame in the mid-to-late 80s on the comedy ‘Moonlighting’. Since then, he’s been credited with over 130 acting credits (according to IMDb). After Moonlighting, Willis had cemented himself as a comedic actor but it wasn’t until he was cast in ‘Die Hard’ that he became known as an action hero. From there, he was cast in various roles as serious and tough heroes, often living the morally grey.

Along with his film career, Willis began another career as a recording artist and made music in the blues genre. After the release of his album, Willis returned to the screen and appeared in the rest of the Die Hard franchise. The success of those films was monumental and it grossed over $700 million internationally and Willis was catapulted to the A list. The early 1990s brought about a big bump in the career of Willis and many of his films were box office flops. However, it was his appearance in Quentin Tarantino’s ‘Pulp Fiction’ that helped boost his career again. That became a cycle for Willis, often having many years in a career slump before having one film jumpstart his career again.

Since the early success of his career, Willis has been cast in over 100 films or television episodes and continues to have success. He may be 65 years old, but one thing is clear, Willis is a veteran actor and his career will continue for many more years.

‘Cosmic Sin’ is available to stream on Amazon, VUDU, and more platforms.