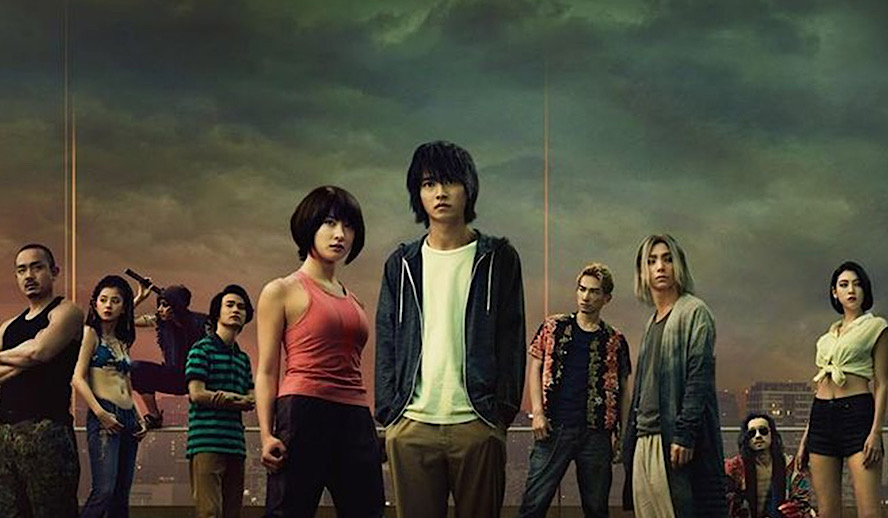 Okay, so I’ll be honest here for a minute. The first scene of the first episode of ‘Alice in Borderland’ is not good. It is, in fact, maybe even terrible. Within two minutes of watching it, I had decided that I was not a fan. The acting was bad, the dialogue felt forced, and the characters were not at all sympathetic.

But, let me tell you, by the end of the first episode, my mind had completely changed. I went from being turned off by Alice in Borderland to being completely and utterly enthralled by it. I was obsessed. Obsessed, as in, I’m telling everyone about this incredible new show I’ve been watching. I made my boyfriend, housemate, and co-worker sit there as I explained the premise of the series to them. In full detail, because that’s how much I savored every minute of this show. So, I bet you’re wondering “Why? What makes Alice in Borderland so good?” Allow me to explain.

The heart of the series lies in its dedication to hard world-building. Alice in Borderland is actually based on a manga that ran in a Japanese magazine from 2010 to 2015. Within the culture of anime and manga, hard worldbuilding is almost always an important element of making a story feel realistic and compelling. Hence why it’s an important element in Alice in Borderland. The show centers around a group of boys, all struggling with recent obstacles, who wish to be transported to a different world. Their wish is granted, but not in the way they expect. They are sent to an abandoned version of Tokyo where they are forced to compete in life-or-death puzzle games that, when cleared, extend their visas in this foreign world. The boys learn all this through hands-on experiences playing the games. We, as the audience, are thrust into the world with them, lacking knowledge of how it operates and being forced to learn through the consequences of the main characters.

But let’s back up a minute to take a closer look at just what exactly hard worldbuilding is. Hard worldbuilding is the idea of creating a fully immersive other universe or society that could theoretically exist in this world. There is a set of clearly established rules that exist in this other world that define how it functions in a clear, grounded way. The best example that I can give of this is the Lord of the Rings universe, where there exists a fully fleshed out society with history and established rules that the characters must follow. In contrast, the best example of soft worldbuilding is anything from Studio Ghibli.

‘Alice in Borderland’: Not a moment wasted in pursuit of progressing the story forward

Now that you know what hard worldbuilding is, let’s talk about how it accentuates the plot in Alice in Borderland. First of all, the hard worldbuilding in this show is incredibly detail-oriented. Every shot has a clear purpose in that it progresses the plot forward and/or makes the characters more compelling to watch. There’s not one moment of this show that is ever unimportant. Every minute we watch, we learn something new about the universe that our characters have been transported to. The editing, of course, works in tandem with this. The emphasis on a fast-paced story is accentuated by the quick cuts and fast-paced set changes. Shots are speedy and change rapidly, so you have to be paying attention to catch all the details. Important information is communicated through close-ups that we only see for a brief moment.

I’m not going to divulge spoilers due to the nature of this article, however, I will say that the climax of the show is one of the most engaging, brutal examples of how hard worldbuilding coupled with dynamic characters can make a story more entertaining to watch. Every detail comes back in the end! The climax of the show is the perfect culmination of all the rules of the society coming together to absolutely destroy the main character. Moving away from that though, for a show based almost entirely on plot twists and mysteries, it somehow manages to remain unpredictable.

The games are always tricky, but never in the way you expect. The clearly defined rules of society always prove to be hidden puzzles that one must think about cleverly in order to solve.  Even when you think you know what’s going to happen, you’re always caught off guard by the way it happens. The games are absolutely thrilling to watch: the time limits, the senseless violence, the vague instructions, everything about them is designed to be impossible to solve. And yet, our main character, Arisu, manages to solve them. A video gamer at heart, Arisu uses the problem-solving skills he learned playing video games to beat the games in this universe. It is an incredible display of pro-gamer propaganda, but, needless to say, it’s effective. It is gratifying to watch Arisu succeed after being labeled a lazy gamer by his family, but there’s also a sick, twisted satisfaction in watching him thrive in such a horrendous place.

Another aspect of the show that’s also worth mentioning is the overall production value. I honestly have no idea how they nabbed some of the shots of abandoned Tokyo that they did. These shots, which are sprinkled here and there throughout the show, are hauntingly beautiful. Just from watching the first episode, you can tell that the budget for Alice in Borderland is not insignificant. The quality is so good that it almost seems as if this miniseries were a fully-backed studio film.

Graphic violence: the aesthetic of video games and its influence on the show

Now, this next aspect could be something that either turns people away from the show or excites them: the violence. This miniseries is incredibly graphic in its portrayal of violence. It does not shy away from depicting violent killings or even torture at some points. But, in my opinion, the violence is not meant to be realistic; much like the video games that influence Arisu, the violence in the show is almost theatrical. It features blood that is clearly digitally added in to give the show a similar aesthetic to a video game. What is more violent than the actual graphics in this show is the way the writers toy with our feelings about the characters. Within the first three episodes, they kill off some very important characters, leaving you to wonder just who exactly is safe. Now, this whole “killing off important characters” thing has been done many times before right? How could it possibly be interesting? Well, the show uses characters that you’re attached to and committed to as examples of the writers’ cold hearts.

Related article: Must-Watch – ‘The Mess You Leave Behind’: A Compelling, Unconventional Murder Mystery

This lack of empathy towards the characters, as well as a lack of build-up to their deaths, makes their murders all the more horrific. Once you realize that the writers don’t care about any of the characters and have no qualms killing them off, the stakes of each game become that much higher. You’ve probably watched movies before where the main character/characters end up in a suspenseful, life-or-death situation. And each time, you’ve probably thought to yourself “they won’t kill off the main character, they can’t do that” as a way to comfort yourself. But here, with this show, no such comfort exists. The writers have no boundaries and will destroy everyone necessary to further the story. The manipulative way with which the writers play with their characters makes Alice in Borderland that much more of an immersive watch. We feel like we’re experiencing the suspense of the games right alongside the main players. We can’t tell who will live and who will die, but that’s part of the thrill of it all.

I want to wrap up by making a bold statement. This is far and away the best show I’ve watched all year. Alice in Borderland deserves way more attention than it’s getting. I watched it religiously until I finished it. I honestly want to re-watch it again right now, it was that good. And I just finished it, a day ago. It’s only eight episodes and it is so worth your time. You’ll be on the edge of your seat throughout the whole series.