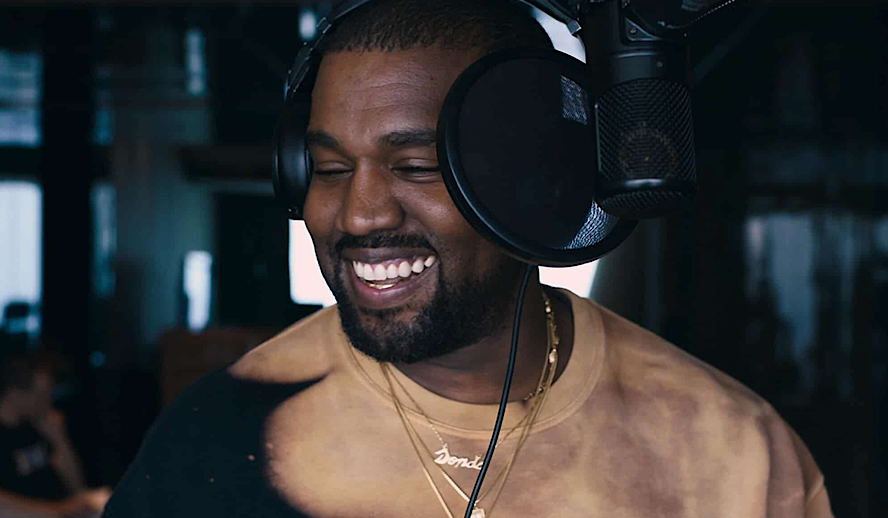 Wednesday, March 2nd, the final installment of ‘jeen-yuhs: A Kanye Trilogy’, was released on Netflix: “act iii: AWAKENING.” This in-depth look into Kanye West’s (aka Kanye, Ye, Yeezus, and Yeezy) rise to fame was a composite of footage director and friend Coodie Simmons (aka Coodie) had taken of the rapper over the past twenty years.

The third and final act of ‘jeen-yuhs’ shows Kanye’s sudden and intense rise to fame. But we only see it from a distance. Once ‘The College Dropout’ was finally released, Ye’s career blew up, winning multiple Grammys, landing television interviews – Coodie became pushed to the sidelines. So, this part of the documentary looks at Ye from a new angle. Unlike the first two episodes, Coodie and Kanye’s lives are not joined at the hip. The bigger Ye got, the less he asked for Coodie to be around (and the more he wore sunglasses indoors). Because of this divide in their team, most of act three is a look at Kanye’s life from afar. For most of this third installment, we don’t get close-ups of Ye’s lips as he spits raps and no more bts. It’s mostly found footage from interviews, tours, and paparazzi. But we do get more of the man behind the camera: Coodie Simmons’ life takes the spotlight.

After watching all three acts of this unique and insightful docuseries – “act i: VISION”, “act ii: PURPOSE”, and “act iii: AWAKENING” – I can confidently say that this is one of my favorite documentaries to date, with the stories in front and behind the camera being equally as engaging and complex.

Although Kanye had dropped Coodie, Ye’s mother Donda regularly requested Coodie’s presence at different functions, so he could document her life. She and Simmons had gotten close over the past decade of filming, so she asked him to film her at different social events, functions, parties, etc, some of which involved Ye himself.

At one of those functions – a Kanye West Foundation fundraiser – Ye is giving one of his more linear speeches. He talks about the White system telling Black men to “quiet down”, the importance of lacking humility, but then he shared something that surprised me. Finishing his speech, he stood up, declaring, “I am the greatest!” which is no surprise, but then followed it up with, “And you should feel that way about yourself, too!”

I had never heard Ye talk about how other people should also feel like they are the greatest in the world. I always thought this was something he believed solely about himself. But, at least in 2007, it was a philosophy that he wanted other people to use to lift themselves up, especially in an oppressive world. Ye is Kanye’s biggest fan. Well, other than his mother.

The Death of Donda

Dr. Donda C. West died suddenly at the age of 58. The LA coroner’s office reported that the cause of death was a “coronary artery disease and multiple post-operative factors due to or as a consequence of liposuction and mammoplasty.” I remember being an eight-year-old watching the news about her passing. Although I knew nothing about Kanye, based on all of the coverage, I could tell his mother was the love of his life. Ye’s relationship with his mom was almost as famous as he is.

As we saw in the first act, Donda was Kanye’s rock, biggest fan, manager, and best friend. She knew the lyrics to his songs, could always crack a smile on his face, and reminded him to stay grounded: She could level him out like nobody else. And the bigger he got, the more he wanted her around.

It is arguable that after Donda’s passing, Kanye experienced a major manic episode that pushed him to keep working and continue touring. He dedicated his song “Hey Mama” to her at each show and refused to stop the grind. After his mom’s funeral, Ye invited Coodie to film for part of the tour, and then other rappers would request Coodie to come film their studio sessions with Kanye. But then, for the first time ever, Ye asked Coodie to stop filming. And it was the last time Coodie would have contact with Ye for six years.

As we saw in the first two episodes, although Kanye is the focus of the series, Coodie’s life is also featured: We learn about his career as a comedian, his work with Creative Control, parts of his upbringing, etc. I know I definitely wanted to know more about the man who took a leap of faith to film Kanye 24/7!

But with this separation between him and Ye, we as viewers are gifted with more footage of Coodie’s life, from the birth of his daughter to the death of his dad. And brilliantly, for the documentary, Coodie interwove footage from his life with footage of Ye’s life during their six-year hiatus from each other, cutting from moments of loving intimacy between him and his daughter to chaotic superstardom in Ye’s.

There’s something poetic about Coodie filming his daughter’s upbringing after filming Kanye’s rise to fame. Like Donda, Coodie supports Ivy’s artistic endeavors as she starts singing, filming her songs, and her little dances. He is an artist, raising an artist, after filming the rise of a world-famous artist. It’s almost painful watching the warmth in Coodie’s life side by side with the shallow stardom of Kanye’s. I mean, with the passing of Ye’s mother and the isolation of his old Chi-town friends, no one was really looking out for him the way people used to.

From ‘Jesus Walks’ to ‘Jesus is King’

Eventually, Coodie and Ye were reunited, and it’s not like old times. I mean, how could it be? Their relationship began during a time when Kanye West could stand in the middle of Times Square and people would just walk on by. Now, he has security wherever he goes.

During their last couple of years of filming, Kanye West began to disappear and Yeezus started to take over. Ye’s manic episodes began to last longer and were the focus of his public image. And although most people with cameras took this as an opportunity to exploit the college dropout, Coodie took it as a personal matter that didn’t need to be filmed. Although Kanye had reached international fame, Coodie still treated him like a human being.

I have never seen a documentary quite like this. It’s clear that Coodie respects Kanye. In the later years when Ye began his infamous rants, even in private settings, Coodie would stop filming. We went from seeing everything to seeing only what Coodie believed to be respectful to show us.

Nothing in the documentary was put together to embarrass or shame Ye, but the documentary also wasn’t put together to protect him. Miraculously, the series was constructed from both a place of love and a place of objectivity. Coodie understands Ye from such an intimate place and sees him for more than the unfiltered husband of Kim K and the former presidential candidate. He sees Ye as a person and depicts him as such.

It was beautiful to see Ye’s beginnings as Jay-Z’s producer to the 45-Grammy-winning demiGod he is today. More specifically, it was beautiful to see this transformation from a lens without judgment: The agenda of the documentary was to share Kanye from Coodie’s perspective as a friend and a filmmaker. With their exceptional storytelling, Coodie & Chike directed a piece of art that shows us Yet as nothing more than just Kanye West.

You can stream all three parts of ‘jeen-yuhs’ on Netflix now.