A Few of The Most Underrated Musical Artists of Our Generation – Willow Smith, Teyana Taylor & More 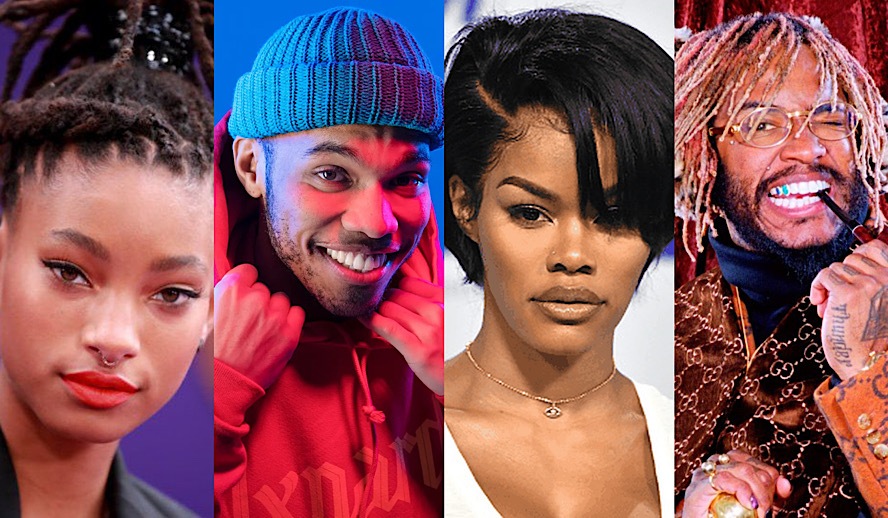 Music is and will always be the most timeless of the art forms. Music has contributed to the bonding of humans for many centuries. The influence, historical stamping, and impact music has had on both individuals and even whole communities are astounding. While everyone, everywhere has an undying love for music of all genres, there are many talented artists that go unnoticed. I find that the best musicians are often the ones who are ‘underground’ or in other words, the opposite of mainstream. There’s a whole generation of people who refuse to listen to music anymore because they claim there isn’t a lot of love and thought that goes into the music of today. The artists that I will be highlighting this time are; Willow Smith, Teyana Taylor, Anderson Paak, and Thundercat.

Related article: Everything You Need to Know About Up-and-Coming Singer and Actress, Olivia Rodrigo

Their musical styles are all very unique to one another but similarly innovative in the nostalgic feelings they provide.  It is unfortunate that music consumers overlook these artists, and that Hollywood doesn’t necessarily provide platforms that they deserve, because I believe people of all age groups can genuinely enjoy their music. I have a great appreciation and respect for these artists because they effortlessly blend old-school sounds with new musical elements, making it very hard not to jam out and vibe.

Most people know her as the daughter of Hollywood power couple, Will Smith and Jada Pinkett-Smith, however, Willow Smith is so much more than the shadow of her celebrity parents. Willow busted into the music scene at the age of 10 with her 2010 release of ‘Whip My Hair’. The Jukebox produced song became an instant global success, setting the seed for the artist’s music career. The single was released with Jay-Z’s label, Roc Nation, as he was delightfully surprised to hear how much talent this young girl had. Despite the popularity, she was receiving, this was not the direction she wanted her music to go in. Willow took a long hiatus from music because she no longer wanted to be seen as the ‘Whip My Hair’ girl. She revealed on her mother’s online talk show, ‘Red Table Talk’ that this was the reason for cutting off all of her hair.

Willow made a surprising comeback in the music industry with her 2015 single ‘Wait a Minute’ which became popular on TikTok. She’s since then, worked with Travis Barker on her new punk rock single ‘t r a n s p a r e n t s o u l’. The single is reminiscent of the sounds of early 2000s punk rock music. Although Willow’s music is innovative in style, she takes a lot of inspiration from her mother, Jada. In the early 2000s, Jada Pinkett-Smith was the front lady of the punk rock band, Wicked Wisdom. Willow even played tribute to their song ‘Bleed All Over Me’ this past Mother’s Day. Willow is the definition of a true rock star. She’s a socially rebellious, spiritually liberated, feminist icon. Her music is a perfect reflection of that.

A Jack of All Trades – Teyana Taylor

The next artist on the list is the extraordinarily talented actress/ dancer/ choreographer/ director/ model/ R&B singer-songwriter, Teyana Taylor. Teyana Taylor has achieved many great accomplishments within the entertainment industry, but her musical career is a different story. Teyana Taylor first came into the music scene way back in 2008. However, the artist didn’t gain popularity in the industry until her appearance in Kanye West’s ‘Fade’ music video. Taylor’s amazing physique and dance skills set her up for total success in any route she wanted to pursue.

Many people were surprised to hear it when her 2018 album, ‘K.T.S.E.’ was released. It was so beautifully written and composed, and many had no idea she could even sing. Singles from the album such as, ‘Issues/Hold on’, ‘A Rose in Harlem’, ‘Gonna Love Me’, and ‘Hurry’ are very reminiscent of 90s R&B artists and groups; Alicia Keys, Destiny’s Child, TLC, and Lauryn Hill, according to my elders. It feels as if it were created and marketed for people of all age brackets to enjoy. That is the beauty of music right there. The beauty and the power to bring people from totally different backgrounds and experiences together over sound.

He’s Got The Funk – Anderson Paak

Although Anderson Paak had been making moves in the industry since 2010,  and trending upward after working on Dr. Dre’s 2015 studio album, ‘Compton’, it wasn’t until the release of his 2016 album, ‘Malibu’ that he gained a decent following. Anderson Paak has since blessed our ears with popular singles such as ‘Tints’ featuring Kendrick Lamar, and his feature on ‘Dang!’ by the late rapper, Mac Miller.

I find Anderson Paak to be a good candidate for this list because the style of his music is very groovy, funky, and soulful. His music is similar to the sounds of music from the 80s. I could compare his works to the liking of Bruno Mars’s style of music with a little more of a modern flair to it. Coincidentally enough, Paak has worked with Bruno Mars on their upcoming debut album, ‘An Evening With Silk Sonic’. If you haven’t had the pleasure of listening to his music, I would highly recommend it. Maybe, introduce him to your parents too.

A Multitude of Genres

Thundercat is arguably the most underground out of all of the artists listed in this article. Personally, I found his music while falling through a rabbit hole of other music. I knew he was something special, and couldn’t understand why other people never knew about him. That’s just my experience. Thundercat is an American guitarist, singer, and songwriter. He was a member of the musical group, ‘Suicidal Tendencies’ from 2002 to 2011. Thundercat’s music falls into multiple categories such as Dance/Electronic, Jazz, R&B, and Soul.

Hit singles such as ‘Them Changes’, ‘A Fan’s Mail (Tron Song Suite II)’, and his work on Kendrick Lamar’s album, ‘To Pimp a Butterfly’ have attributed to putting his name on the map in the music industry. His music is complex in the way that it is both easy and difficult to describe to others. I firmly believe Thundercat, amongst many others listed here or not, in the past, present, and future of music.

Willow Smith finishes up her fifth upcoming album with her new single ‘T r a n s p a r e n t s o u l’ featuring Travis Barker. The unnamed album is to be released this summer with the Roc Nation label.

Teyana Taylor is cast to play the iconic singer, Dionne Warwick in an upcoming biopic series. The title is still to be announced.