From Bob Dylan to Beyoncé, These Are The Most Memorable Music Documentaries 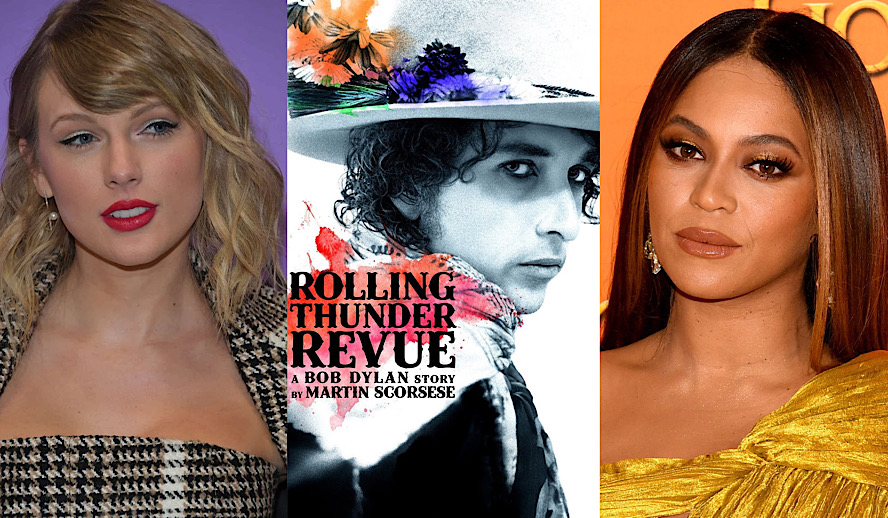 The massive film genre of the documentary has long been as unpredictable and complex as the subjects their cameras capture. Whether it exhibits the disheveled lives of a mother-daughter duo past their prime in Grey Gardens or acquits an innocent man of a murder sentence in the revolutionary The Blue Line, documentary films hold perhaps the most power and influence of all filmmaking. Additionally, the subgenre of music documentaries has proved to be a vital cog in the ecosystem of biographical filmmaking as they provide an inside look into prominent figures that hold as much public interest as they do global influence.

From films that document the careers of politicians like Knock Down the House, which chronicled congresswoman Alexandria Ocasio-Cortez’s 2018 underdog triumph, or the everyday lives of beloved celebrities like HBO’s Bright Lights in which the late Carrie Fisher and Debbie Reynolds are immortalized, documentaries have been proven to be just as intoxicating when focused on renowned individuals.

Related article: ‘Miss Americana’: Taylor Swift’s Netflix Documentary Is A Powerful Tool For Women To Respect Their Worth

The landscape of the documentary genre radically shifted when filmmakers turned their cameras toward the rarely humdrum lives of musicians. The history of music documentaries stretches all the way back to the late 1950s with the release of the acclaimed Jazz on a Summer’s Day, a film that captured the highlights of the Newport Jazz Festival in 1958, which included the likes of Jazz legends Louis Armstrong and Jack Teagarden. When documentary filmmakers understood this platform could be utilized in a way to expand and explore the careers of famed musicians, a new facet of gripping filmmaking emerged. In 1964 A Hard Day’s Night, a comedy film starring the most popular band of all time, The Beatles, hit theatres and its unparalleled box office success and critical acclaim skyrocketed the music filmmaking genre onto an interstellar trajectory.

The Stars & Their Documentaries That Set the Mold

The notion of a film about a mega-superstar that allows their fanatic followers a glimpse into the musician’s life is game-changing in its own right; however, several music documentaries throughout the decades delivered on more than just a day in the life. In 1967, Bob Dylan: Don’t Look Back debuted in theaters and it utterly transformed the way in which the American celebrity is framed. The film was directed by historic documentarian D.A. Pennebaker who has become highly regarded for his recording of stars like David Bowie and momentous political movements such as Bill Clinton’s 1992 presidential campaign.

Together Bob and Pennebaker’s Don’t Look Back presented a raw view of Dylan’s persona, including the pompous star and tortured artist. When reflecting on the influence of the film Vulture wrote, “Pennebaker shows [Dylan] sparring with reporters, mocking his peers, and challenging audiences with his more abstract, poetic new musical direction… This movie is like a blueprint on how to be a modern celebrity.” The genius of Don’t Look Back is in its innovative utilization of the documentary medium; Dylan’s allowance of himself to be captured so wholly tested the audience’s understanding of celebrity and manufactured a public persona for Dylan that is as intriguing as it is frustrating.

Although Pennebaker found success in letting cameras film an unfiltered and debased Dylan, not every music star went about their documentaries in the same manner. Madonna’s 1991 Truth or Dare took a different approach to framing a superstar. When making this film it is clear that the pop singer executed an intentional personality with the hopes of invalidating several of the criticisms she faced as the face of women in music. Throughout the documentary, Madonna commandeers the reigns of the cameras as she attempts to take control of her own narrative.

A recent Pitchfork review explores the star’s authoritative presence in the film, “Madonna uses Truth or Dare to self-mythologize… [She] fascinates less when a crowd of thousands is her audience, and far more when a camera allows her to perform intimacy to an imagined audience.” Where Dylan succumbed to the camera, Madonna conquers it. Both of these methods proved to be greatly influential despite their differences as they hypothesized the potentially unlimited routes stars retained access to when attempting to portray themselves in a documentary film.

The state of the music documentary was revolutionized once again when Amy released in 2015. On top of receiving critical accolades, including the Academy Award for “Best Documentary Feature”, the late superstar’s film went on to show the power music documentaries can have in advocating for change within the very industry they archive. Amy shares the tragic story of Amy Winehouse’s life through the strain of celebrity culture. The intimate, behind-the-scenes moments of Amy’s rise to fame highlighted the reasons why she was so universally beloved and ultimately make the footage of the star’s descent that much more affecting and disturbing.

Amy includes several scenes that expose the mistreatment and exploitation Winehouse faced as she became one of the most popular people on the planet. For example, the haunting moment of Amy’s father forcing the star to pose for a picture with fans when trying to escape the toxic pressure of public opinion leaves the audience feeling as though more could have and should have been done to preserve Winehouse’s wellbeing. Amy is radical in its denouncement of the music industry and the general treatment of the celebrity, exhibiting a new and undeniably compelling function of the music documentary film.

While not as subversive as documentaries like Amy, other musician oriented films have found success in advancing and improving upon the format utilized by Dylan and Madonna. As Truth or Dare and Amy convey, the music industry is never easy for a woman, often scrutinizing all of their career and personal decisions, and documentaries are a very effective device in means of humanizing and cultivating compassion for stars. Beyoncé and Taylor Swift have both found recent achievement in releasing documentaries that combat criticism by capturing a version of their authentic selves paired with their undeniable talent.

Related article: ‘Black is King’: Everything We Know About Beyoncé’s Visual Album on Disney+

Homecoming: A Film by Beyoncé accomplished the goal of humanizing and celebrating the Queen B by capturing the iconic 2018 Coachella performance and interspersing it with footage of Beyoncé and her team working tirelessly in preparation for the concert. Beyoncé completely claims control of her narrative as Homecoming shows both her hard work and ultimate flawless performance that culminates in the enormous triumph of Beyonce’s talent as well as the talent of the black community.

Taylor Swift traveled a similar route with her 2020 documentary, Miss Americana. Swift became a target for public judgment after her feud with Kanye West and Kim Kardashian left the pop singer with the reputation of a backstabber and snake. Miss Americana served as a reclamation of Swift’s story as she was able to share herself in her most vulnerable state yet, exploring battles the pop star faced with eating disorders and political pressure. In addition to exposing Swift’s political activism, Miss Americana also contained footage of Taylor discussing her sexual assault court case, posing the singer-songwriter as a star that has overcome victimhood and become her own hero, for herself and others.

In the recent surprise release of Folklore: The Long Pond Studio Sessions, Swift reflects Beyoncé’s tactic of providing evidence for a star’s criticized success. Taylor’s most recent album, “Folklore” is one of the most acclaimed of her career, and dedicating an entire film to performing the album and explaining the process behind each song serves as a victory lap solidifying the inarguable genius behind Swift’s indisputable success.