The Future of the Music Industry Revealed in ‘Billie Eilish: The World’s A Little Blurry’ 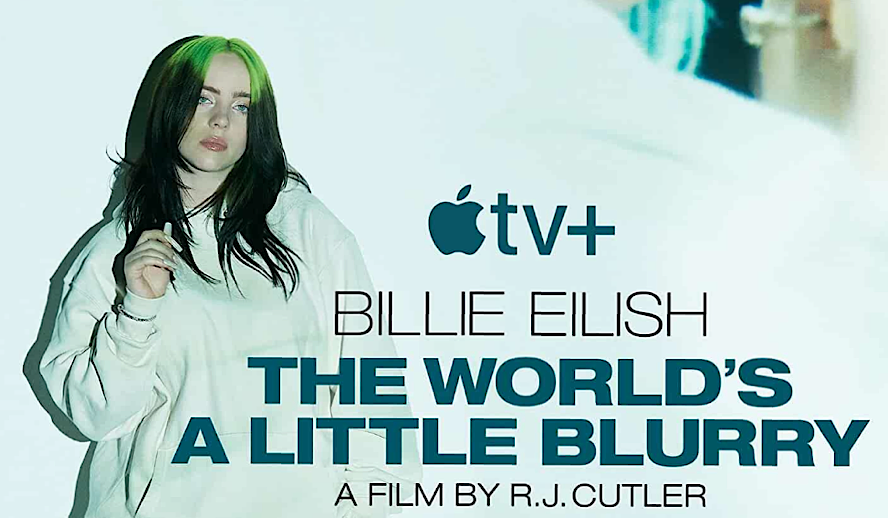 The only reliable facet of the music industry is its unpredictability. Each day era-defining albums are made, established artists fall from grace, and new stars are born. One of the best ways in which iconic musicians have been established and taken control of their stardom is through the form of documentary. The fusion of music and documentary traces all the way back to the 1950s when jazz became a nationwide phenomenon in the US. The focus of the film, ‘Jazz on a Summer Day’ was the performances of the Newport Jazz Festival which featured renowned musicians such as Louis Armstrong.

The full potential of a musician-based documentary was later realized with films that followed contemporary music legends like The Beatles in ‘A Hard Day’s Night,’ Bob Dylan in ‘Don’t Look Back,’ and Madonna’s ‘Truth or Dare.’ The utilization of documentaries remains strong today as the new frontier of streaming services has provided a surplus of opportunity for high-profile artists to share their extraordinary journeys. From Beyoncé’s ‘Homecoming’ and Taylor Swift’s ‘Miss Americana’ on Netflix to Nicki Minaj’s upcoming docuseries on HBO Max, there has never been a better time for an artist to cement their legacy in the most elite fashion imaginable.

Apple TV+ has finally made its contribution to the music documentary genre with the industry’s latest prodigy, Billie Eilish. Although Eilish is only 19 years old, the stunning accolades she has seemingly effortlessly garnered within her less than two-decade existence places the alternative pop star as more than worthy of the documentary treatment. Some of the impressive records Eilish has set include being the first and only artist born in the 21st century to have a number one album, being the youngest person to ever be nominated for all four major Grammy nominations in one year (record of the year, album of the year, song of the year, and best new artist), and subsequently becoming only the second artist in history to win all four. Apple TV+’s ‘Billie Eilish: The World’s a Little Blurry’ effectively captures the teenager during what is already a tumultuous time made only more insane with the creation of Eilish’s hit debut album ‘When We All Fall Asleep, Where Do We Go?’

Billie Eilish is Just a Normal Teenager… Sort of

‘The World’s a Little Blurry’ is an astoundingly meaty film, weighing in at a total runtime of just under two and a half hours. While a large portion of the film is attributed to the blossoming of Eilish’s superstardom, a surprising majority of the documentary is dedicated to conveying the normalness of Billie’s life as a 16-to-19-year-old girl. Right from the jump, the young star separates herself from the common inaccessible celebrity as she defines her relationship with her “fans,” declaring, “They’re not my fans. They’re a part of me.” This simple quote sets the tone for Eilish’s approachable and vulnerable demeanor throughout ‘The World’s a Little Blurry.’ From hallmarks of all modern teenagehood like passing her driver’s test to dating a boy who does not provide the support Billie desires, it often becomes easy to forget Eilish’s enormous fame throughout personable moments such as these.

One especially sensitive adolescent scene for Billie comes in her bouts of insecurity during the process of recording her album under a time constraint. Overcoming feelings of self-doubt is an essential part of the maturing process that all teenagers struggle with as superstar Eilish reveals in one heartbreaking segment of the film. As her brother and music producing partner, Finneas, attempts to bait Billie into finishing the recording of a song, Eilish protests in familiar teenage angst, complaining that she will not be able to make an album in time because her voice is not good enough. Allowing raw, human insecurities such as these into the documentary is a brave choice for Eilish that pays off in portraying the star as a complicated human being first and foremost.

‘The World’s a Little Blurry’ also conveys Eilish’s normalness in fun ways, notably her relationship with pop sensation Justin Beiber. Billie is charming in her unapologetic adoration of Beiber, who was the heartthrob of the 2000s and remains one of Eilish’s idols. In order to get across just how obsessed the star has been with Beiber, Billie generously shares archival footage of her at 13 describing her fear that she will not be able to have a boyfriend in the future because he could never live up to her love for Justin. Eilish also finds herself star-studded when she is greeted by Katy Perry and her then-fiancé Orlando Bloom, who Perry admits is a giant fan of Billie’s music. It is not until after their interaction that Eilish realizes Bloom played Will Turner in the ‘Pirates of the Caribbean’ films and cherishes that he kissed her cheek. Moments such as these are extremely effective in humanizing a celebrity of Eilish’s stature and reminding audiences that Billie is really living the life of a teenager despite her unprecedented success in the music industry.

Finally, ‘The World’s a Little Blurry’ spends an impressive amount of time focusing on the robust O’Connell (Billie’s real last name) family unit. Billie explains that her passion for music stems from her love for her family, explaining that her mom taught her how to play piano and she writes songs in her brother’s room to this day. As the film documents Billie’s process writing and recording ‘When We All Fall Asleep, Where Do We Go?’ Eilish and her brother rarely leave their home, an accurate reflection of how instrumental the family unit is to the creation of her music. The documentary also shares arguments between Billie and her family, an all too familiar function of any family’s dynamic, when Eilish’s mother suggests Billie attempt to write a song that is more radio-friendly. Instead of reverting to a tantrum, however, Eilish opens up and is frank with her mother and the audience, plainly stating, “I hate writing songs.” This brilliantly honest exchange exhibits how ‘The World’s a Little Blurry’ successfully conveys the ordinariness of Eilish’s extraordinary life.

The World is Billie’s to Lose

Although the beauty of witnessing Eilish’s humanity is an enormous asset to the documentary, Billie’s phenomenal career highlights are what establish ‘The World’s a Little Blurry’ apart from the average music documentary. With all of the obstacles, the film shows Billie facing such as writer’s block and public scrutiny, the inevitable thesis of the Apple TV+ feature is Eilish’s unstoppable rise to the top of the music industry. The three years of life that the documentary captures hold an unprecedented wealth of material that signals Billie’s superstardom is on a trajectory unlike any other. Starting with footage of Eilish recording her hit song “Ocean Eyes” at age 13,  ‘The World’s a Little Blurry’ conveys the young star’s genius from the jump. Billie’s success quickly avalanches as the film covers Eilish selling out venues across the world, receiving stellar critical reviews for her album, and ultimately celebrating the most prosperous nights in recent Grammys history.

Analogized in Billie’s refusal to stop dancing at her shows just because she experiences tremendous pain from moving her legs, ‘The World’s a Little Blurry’ frames Eilish’s triumph over the music industry as an imminent force to be reckoned with. As Billie breaks record after record and takes her art to the largest venues imaginable, the audience slowly but surely realizes that this will not be the last documentary about the young pop star. If anything, ‘The World’s a Little Blurry’ serves as an emotionally stirring overture to a long, winding road of musical success for Eilish. The world may be “blurry” but with several Grammys, innumerable hit songs, and a documentary under her belt all before reaching the legal drinking age, a spectacular future of music for Eilish is nothing but transparent.