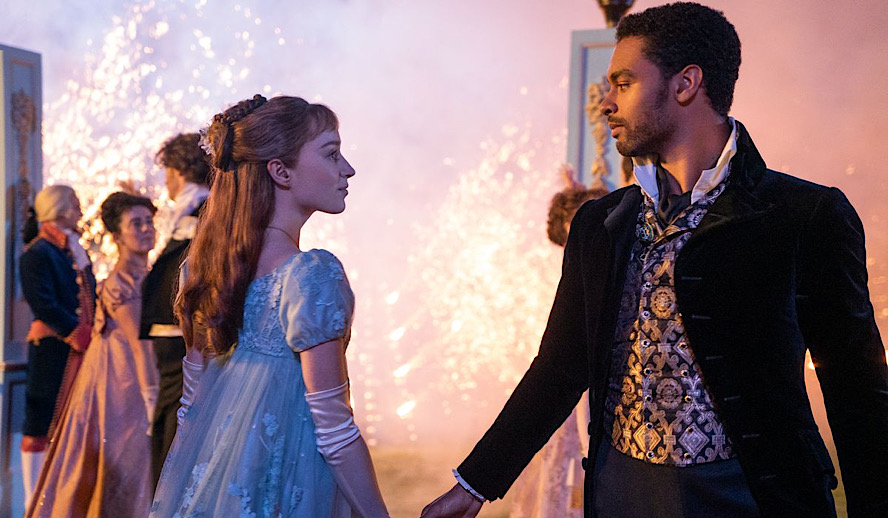 While those who watched ‘Bridgerton’ in its initial release month were drawn in by its promise of drama, gossip, and scandal, new audiences are being pulled in by its new, free advertising – viral internet trends and TikTok videos. The trends, chronicling a newfound cultural obsession with the 1800s English elite society ‘Bridgerton’ depicts, has resulted in a startling statistic; according to Netflix, the show has been viewed by 82 million households to date. Here’s how the ‘Bridgerton’ craze began, and an insight into why perhaps the show is so popular.

Over the past couple of months, TikTok users have been creating inventive content inspired by ‘Bridgerton’ – an 1800s historical drama following the young Daphne Bridgerton as she participates in her first “social season,” hoping to secure a husband. It started with general reactions to the show, in a trend where users presented what they looked like before and after binge-watching its eight episodes. After exhibiting their normal appearances, they would transition into donning decorative gowns and eloquent accents – equipped with new 1800s slang such as rake and modiste. The trend addressed the decadent and lavish lifestyle of the London “ton” (referring to the elite English society) – an enviable daydream for those of us stuck in COVID-19 quarantine.

Then, the videos escalated into a fashion trend, inspired by the exquisite gowns from the show. Corsets began gaining popularity on Amazon, with TikTokers sharing their favorite ‘Bridgerton’ themed clothing and jewelry from the site. It was no issue that the styles were based on Victorian fashion, rather than the Regency era ‘Bridgerton’ actually takes place in; the trend was afoot. Lyst Insights reported that in the first four weeks of the show’s release, “searches for corsets (+123%), pearl and feather headbands (+49%), long gloves (+23%) and empire line dresses (+93%) [were] soaring.” A particular Victoria Secret Dream Angels corset top even sold out after gaining internet notoriety.

Finally, when TikTok user Abigail Barlow (@abigailbarlowww) helmed a ‘Bridgerton’ musical, the show reached a level of TikTok fame only previously awarded to Pixar’s ‘Ratatouille’, whose own TikTok musical amalgamated in an online benefit concert in January. One half of the musical duo Barlow and Bear, Barlow and her partner Emily Bear composed a collection of songs based on popular phrases and themes of the show. Some of the songs include Burn for You, Ocean Away, and If I Were a Man, to name a few. For those unfamiliar with TikTok, the app is a breeding ground for collaboration and re-contextualization. This was perfect for the ‘Bridgerton’ musical, with other users enthusiastically adding onto the trend with original choreography and vocal arrangements. It’s even been commented on and reposted by the ‘Bridgerton’ cast themselves.

If Lady Whistledown were to comment on this viral sensation, she would certainly say that the “ton is abuzz” with Bridgerton fever.

How Shondaland Refitted the Regency Era to Fit Modern Taste

So, why is ‘Bridgerton’ so popular?

Well, while the initial draw to ‘Bridgerton’ may be its ‘Gossip Girl’ like qualities, the show plays off in impressively unique and refreshing ways. A project from Shondaland, the production company helmed by the brilliant Shonda Rhimes, ‘Bridgerton’ excels in inclusivity and representation. Similar to Ryan Murphy’s attempts with his show ‘Hollywood,’ Bridgerton attempts to rewrite a largely Caucasian history into one that is racially diverse. This alternate 1800s reality is one with a colorblind society – with the main, enviable couple of the series an interracial relationship, and the English Queen – a Black woman. The dedication to casting racially diverse actors in main roles pays off too; the diversity feels genuine, rather than mere tokenism. All in all, the show functions as a recontextualization of history, with a dream of how society should look like.

Aside from diversity, ‘Bridgerton’ also refits its dated era into the new age in other ways. For one, though the characters speak in olden dialects, their humor is quite contemporary. It’s easy to relate to the Bridgerton family and their inter-sibling squabbles, and even easier to feed into the gossip and drama surrounding Lady Whistledown’s Society Papers (again, very similar to the ‘Gossip Girl’ blog). With orchestral adaptations of modern songs like Thank U, Next by Ariana Grande, Wildest Dreams by Taylor Swift, and Bad Guy by Billie Eilish – it’s easy to forget that the world of ‘Bridgerton’ exists worlds, and decades, away.

Thematically, the show also explores feminism through the character of Eloise Bridgerton, who repeatedly criticizes the social season – instead wanting an independent, husband-less future. It is clear that the show criticizes the Regency Era’s unrealistic expectations of ladies – depicting their lousy husbands, heavy sheltering from sexual topics (to the point where the girls don’t even understand how children are conceived), and ridiculous perceived value based on how many suitors are interested in them. However, what ‘Bridgerton’ does well is that it doesn’t try to fault any woman for what she wants in her own life. Eloise may want to be independent, but Daphne dreams of marrying and raising a family – and neither is less of a woman than the other. This recognition is a pivotal theme of ‘Bridgerton,’ attractive to its largely female audience who values feminism and empowerment. In fact, the most popular song in the aforementioned TikTok music is titled If I Were a Man, which chronicles Eloise’s struggles and has been used as a background sound for more than ten thousand TikToks.

Luckily, ‘Bridgerton’ fans will soon have more content to consume and react to. On January 21st, Netflix officially announced that season two of the show  was in the works. The season will follow Lord Anthony Bridgerton – the eldest of the Bridgerton brothers – as he participates in the next London social season to find himself a wife. This seems to be in line with the second book of the ‘Bridgerton’ series, The Viscount Who Loved Me, signaling to fans that the show intends to follow its literary guide. In fact, Daphne Bridgerton’s love story with the Duke of Hastings, depicted in season one of ‘Bridgerton’, is merely the beginning; the book series is composed of 8 novels following the various Bridgerton family members on their romantic escapades. With a dedicated literary fanbase and now avid Netflix audience, the possibilities for the ‘Bridgerton’ TV adaptation are endless.

And while audiences will have to wait for at least a year for new episodes – COVID-19 filming restrictions withstanding – the hysteria does not seem to be dying anytime soon. With new discourse surrounding the show and TikTok trends galore, ‘Bridgerton’ fans will certainly be preoccupied until then.