‘Brother to Brother’: A Film that Evokes Poetic Questions about Historical Queerness-Blackness 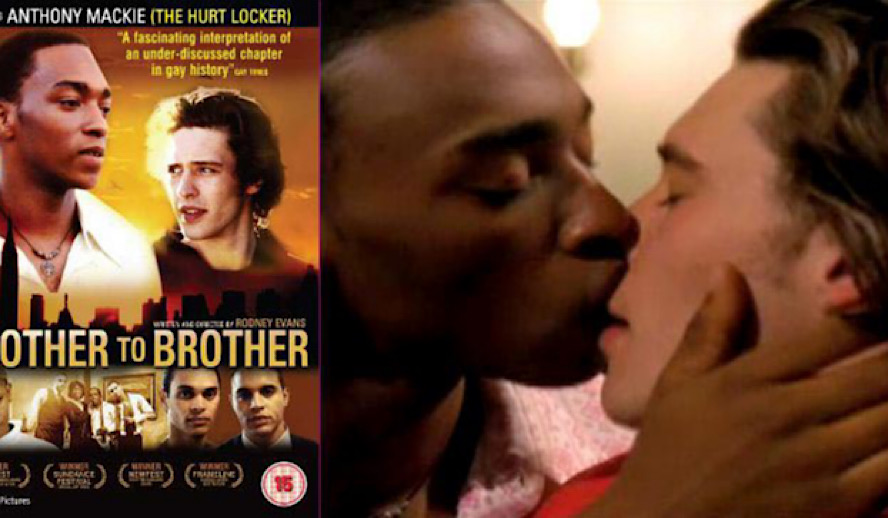 “He blew a cloud of smoke . . . it was growing dark now . . . and the smoke no longer had a ladder to climb … but soon the moon would rise and then he would clothe the silver moon in blue smoke garments clever idea he had… but truly smoke was like imagination”

These are the words of queer Harlem Renaissance pioneer and Brother to Brother focal point Richard Bruce Nugent. The movie starring a baby-faced Anthony Mackie as Perry, the movie details the Black and queer intersection using the Harlem Renaissance as a reference point. The Harlem Renaissance was an explosion of Black art and culture in Harlem New York between the 1910s and the 1930s. In the film, Anthony Mackie plays a gay writer at Columbia University, recently annexed from his home at his parent’s discovery of his sexuality. Perry finds Bruce Nugent in passing, and then again at the homeless shelter he works at. What’s especially unique about this film is its conversation about patterns of love, hate, acceptance, and rejection through time.

Even those who aren’t familiar with the Harlem Renaissance know it’s chariots. Artists like Langston Hughes, Louis Armstrong, and Josephine Baker found their fame in the Renaissance. Although equally talented, Nugent never saw the fame and fortune his peers received. Most of his work detailed the gay experience and as a result of his authenticity, he was shamed by his own community. After the publication of Fire!!, a magazine detailing far more edgy aspects of the Black experience including prostitution, bisexuality, and inter-racial attraction, the production site for the magazine was ironically burned down in protest after mammoth disapproval from the majority of the Black community.

The resistance comes from the ideology that in order for Black people to progress we have to appear presentable to white people in power. It’s the reason why the civil rights movement has iconic figures like MLK, Rosa Parks, W.E.B Du Bois, and many more. The progression of Black people had been entirely reliant on figures of success, poise, control, and restraint. Any depictions counter to those essential to Black progress were met with immense resistance, even if it meant Black people showing similar hate and viciousness that they received from white people to their own community. This is the dilemma Brother to Brother unearths. Is one Black before they’re gay? Is all hate weighted the same no matter the circumstances? And what do these questions lead Black-queer artists to create?

‘Brother to Brother’ – Navigating the Unknown

It’s not long before Perry finds himself enjoying the company of another man. In these moments, gentle touches and flirtatious camerawork creates a sense of safety between Perry and his love interest. And when that safety flaunters, watching Anthony Mackie brilliantly navigate the unknown is wondrous.

The film blurs the line of what love can mean. It shows us that old age, merely an illusion of time can be a gateway to a multitude of different kinds of love as time, experience and beauty find their footholds in our characters.

Bruce Nugent is played by Tony Award-winning Roger Robinson delivers a magnificent performance. His line delivery is just as beautiful as Nugent’s poetry. Robinson magnificently navigates queerness, homelessness, and what it means to be “respected”. When Perry asks Bruce if he felt slighted that Langston Hughes earned much success, but his career was unjustly disrespected because of his sexuality, he says “Respected? If you wrote about being gay in that time respect was the last thing you was gonna get”.

The Mirror of Time and Pain

Bruce and Perry’s relationship is a mirror to Bruce and Langston’s relationship in the film. Interweaving with flashbacks filling in the mystery of Nugent, we literally see his story and the creation of Fire!! By paralleling our understanding of how Bruce had his artistic and sexual genesis, we thus understand Perry’s store as a reflection of Bruce’s. By using Bruce as a constant through an altered American landscape, we understand that although America has changed, the same themes persist through the decades. Questions about whether American society is truly any different than many years ago arise.

The film also subtly touches on the 1992 LA riots, the center of racial turmoil for the early 90’s America at the brutal beating of Rodney King. The parallels between this and the BLM movement are impossible to ignore. Considering this film was released in 2004, the fact that its themes can still be understood in past and present fullness is a feat of magnificence.

The film says that time is merely a perspective, and in the face of identities like queerness and Blackness are unchanging in their perception to society for better and worse. As we progress in empowering Black people, the same issues we’ve been dealing with don’t die out just because we want them to.

Fetishization finds it’s way at the center of Brother to Brother’s queer and Black conversation. The issue of dating outside of your race will always lead you to ask questions about someone’s intentions; are you genuinely loved or a fetish? As Perry navigates this world I can’t help but apply my own knowledge of dating apps and services. Sometimes it’s hard to find a balance between someone looking to use you to fulfill their fantasies, and the opposite group, the group that uses “preference” to mask their racism. Watching, you might be surprised at how ahead of it’s time the film is. Even Nugent’s poem is literally a scene out of Moonlight, a film impossible to mention when discussing Black queer film.

“He blew a cloud of smoke . . . it was growing dark now . . . and the smoke no longer had a ladder to climb … but soon the moon would rise and then he would clothe the silver moon in blue smoke garments clever idea he had… but truly smoke was like imagination”

The parallels between this film and what we already have in our contemporary society, especially in observing queerness and blackness, it’s jarring at times to process. From the Harlem Renaissance to the early 2000s, to 2020, how much progress have we really made? Watch Brother to Brother and lean in to hear the poetic questions.