A Tribute to Agnès Varda: The Mother of the French New Wave Film Movement 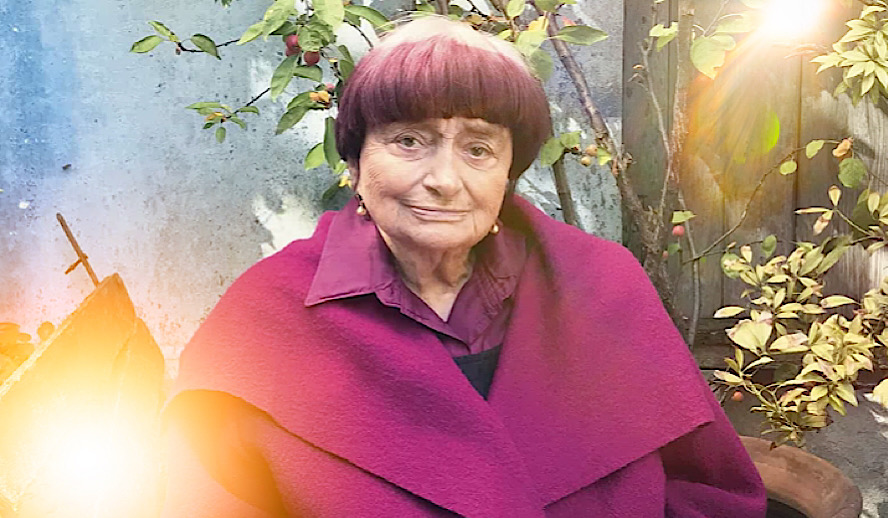 When I was a teenager beginning my journey into Cinema history, I quickly discovered that many ‘classics’ didn’t appeal to me as every film critic said they should. ‘Rocky’, ‘Taxi Driver’, not even ‘The Godfather’ did it for me. And then I stumbled into the works of Agnès Varda, beginning with ‘Cleo from 5 to 7’. This film was a revelation. Despite the film being made in 1962, it felt refreshingly modern, relevant, and distinctly and completely female; a side of film canon that often gets pushed aside or treated as an afterthought.

This auteur made films for over half a century that has and will stand the test of time. She often featured in her documentaries with her distinctive two-tone hair and playful manner. Her films showcase her curiosity and willingness to explore the boundaries of Cinema. The death of this artist in 2019 was a blow to an industry that could learn so much from this unique and innovative voice.

Agnès Varda – The ‘Mother of the French New Wave’

Agnès Varda was born Arlette Varda in Brussels, legally changing her name to Agnès when she turned eighteen. While she studied literature and psychology at the Sorbonne in Paris, art history at the École du Louvre, and photography at night school, Varda had no formal training in film.

When Varda made her first self-funded feature, ‘La Pointe Courte’ (1955), at only twenty-six years old, it was in a rapidly changing film industry. The shifting ideologies after the Second World War, combined with technology making cameras both lighter and cheaper, led a group of ambitious filmmakers to begin what would become known as the La Nouvelle Vague, or the French New Wave. Among the famous Cahiers du Cinéma directors (including Jean-Luc Godard, François Truffaut, and Jacques Rivette) emerged an influential female director whose unique voice would add to Cinema history for six and a half decades.

Despite being close friends with Godard, Varda excused herself from the Cahiers crowd, resisting intellectualizing film as a medium and instead of approaching it as an author would a book, giving her voice free reign on the screen. After making short films for the French tourist board, Varda released her sophomore, and arguably most famous, fiction feature ‘Cleo from 5 to 7’ (1962). This poetic film follows a young pop singer in the two hours she waits for cancer test results. Even today, the film feels both refreshingly modern and with a distinctly female voice, as it comments on how ‘ditzy’, beautiful women are often too quickly dismissed on-screen, while instead, this film dives into Cleo’s most intimate thoughts. The film remains one of the most iconic from the French new wave period.

After the French New Wave

After her feature ‘Les créatures’ (1966) failed to do well at the French box office, Varda traveled to Los Angeles where she directed ‘Lions Love (…and Lies)’ (1969). This was done simultaneously as her husband, esteemed director Jacques Demy, made ‘Model Shop’. Varda and Demy had a deep connection both on and off-screen, with Varda creating three films in her late husband’s honor after his death in 1990.

The first of these was the drama piece ‘Jacquot de Nantes’ (1991), a recreation of Demy’s childhood in occupied France. This was followed up by ‘The Young Girls Turn 25’ (1993) detailed the making of Demy’s 1967 musical ‘The Young Girls of Rochefort’, and was followed by the biography ‘The World of Jacques Demy’ two years later. Varda would also go on to make ‘The Beaches of Agnès’ in 2008; a poetic autobiographical documentary dedicated to her late husband.

Varda would oscillate between documentary and fiction throughout her career, showing a keen eye and original voice in both. One of her most famous and well-received films came in 1985 with ‘Vagabond’. This tale of a young homeless woman told in flashbacks after she is found dead in a ditch on the side of the road encompasses one of the most progressive and intricate portrayals of a female character put to screen. The protagonist’s story, Mona (Sandrine Bonnaire), is told from the perspective of those she encounters on the road, eliciting envy and pity in equal measure. Each meeting with Mona proves that we are not, and cannot be, all things to all people.

Varda dipped in and out of documentary throughout her career but, with the exception of a few shorts, tipped completely into the factual in the mid-nineties, with ‘One Hundred and One Nights’ (1995) being her last fiction feature. This is also where some of her best work emerged, including the introspective ‘The Gleaners and I’, featuring Varda herself, which premiered at the 2000 Cannes Film Festival. The documentary perfectly captures Varda’s playful and curious approach to film. Like her subjects, who live and thrive from what others deem as waste, we get the sense that Varda was gleaning material for the documentary rather than having a fixed goal; collaging an image of the world from footage others might have deemed worthless.

This was followed up by the equally charming ‘The Gleaners and I: Two Years Later’, but it is Varda’s Oscar-nominated ‘Faces Places’ (2017) that is perhaps her non-fiction magnum opus. The film epitomizes the quirky creator’s style, as Varda teams up with a thirty-five-year-old companion JR, a talented French street artist who is never seen without a pair of dark sunglasses. The two travel around the country in a camera-shaped vehicle, constructing giant street art pieces of the people they encounter on the road.

Varda completed her career with a total of twenty-one feature films under her belt, as well as numerous awards including the Cannes Film Festival’s lifetime achievement award, and Venice Festival’s Golden Lion; two festivals in which she would later serve as a jury member. In 2009, she was inducted into the French Légion d’honneur, and was the first female director to receive an honorary Oscar, doing so in 2017.

A true artist is one who keeps creating. Varda never seemed to run out of stories to tell, or new ways to tell them, and continued making content under her death in 2019. Her final work, ‘Varda by Agnès’, is a two-part documentary detailing her canon of work and life dedicated to the art of film. She would pass away the same year the documentary was released, leaving the world of Cinema brighter for the time she dedicated to the craft.