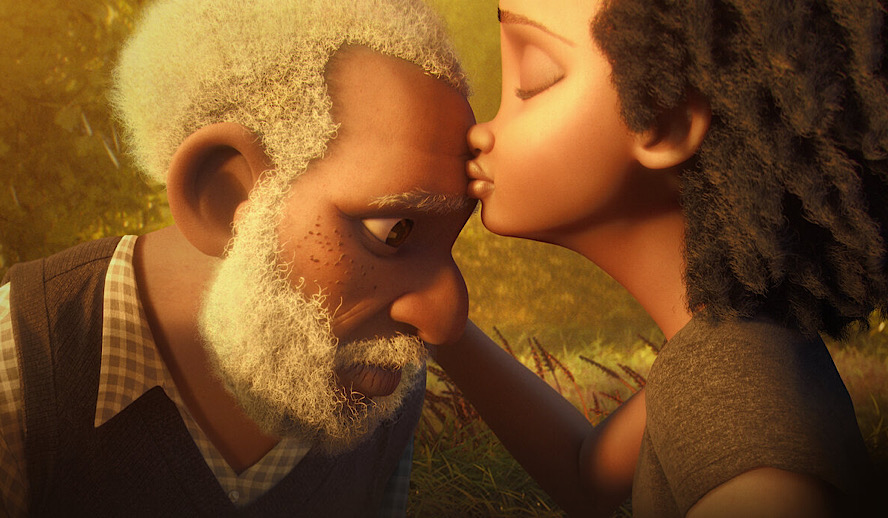 Disney and Pixar have historically cornered the animation market, especially animation shorts. Although there was very little marketing done for the movie, Netflix’s ‘Canvas’ has gained a lot of traction recently, rightfully so, because the short certainly holds its weight against some of the most memorable animated shorts of all time. The film is the writing and directing debut of an incredible artist and animator Frank E. Abney III, who has worked in the animation departments on a number of award-winning Disney and Pixar films including Incredibles 2, Coco, Toy Story 4, and Frozen.

‘Canvas’ is a beautiful story about loss, grief, aging, and passion, and how art can bring everything together to blossom a person no matter what they’re going through. The thick of the story hangs on the theme of the personal setbacks that anguish can cause a person, and the film evokes a strong degree of poignancy throughout the melancholic ebbs and flows, then rounds off with an uplifting, heartwarming message. In essence, the story is a message for the past, present, and future journeys that art can take us on, how it can take us back to a happier time with people we love, and ultimately, permeates the moments and memories that make us human.

‘Canvas’ – An Uplifting Story About Overcoming A Devastating Loss

Canvas, at its core, is a concept film about a grieving grandfather struggling to reclaim his passion for painting after suffering a terrible loss, which is left ambiguous until the end, and his journey on finding the inspiration to paint again. The short begins with the grandfather painting, smiling as he looks over at his wife, before a white fade-out reveals it was only a dream, and as he gets out of bed, it’s obvious his life is full of darkness and sadness. The animators did a wonderful job at conveying the deep emotion through the grandfather’s facial expressions, the film’s score – composed by Jermaine Stegall – and the color coordination. There’s some lightness brought into the darkness with the arrival of his family, what appears to be his daughter, and his granddaughter, who stays with him and draws the whole, showing that the artist gene is in their family. This is a clever tie in by the writers, and the perfect plant for the climactic seed to bloom at the end.

It’s clear the grandfather is unwilling to move forward, and it’s sad to see him react angrily and painfully to everything around him. Even after his granddaughter leaves, and makes another attempt at painting, the sadness swells in his face, and the paintbrush never reaches the canvas, always resulting in him scurrying away in anger. What sparks his love again is foreshadowed through his granddaughter’s clear fondness for drawing, but she inadvertently imbues that love in him once again when it happens, it’s so convincing and moving. The effectiveness of the emotion and engagement to the story with the elements of love, loss, family, and passion is a reflection of the sheer talent of the cast and crew behind this masterpiece, all of which brought diverse and talented backgrounds to the project. The animation is aesthetically pleasing, and the music is fitting to the mood and features the use of an angelic orchestra. It is a very emotional short film, all in all.

The pain that yields the protagonist from painting is compelling, and it’s so emotional seeing him so alone. Because of the pain, it seems the protagonist literally and metaphorically buried the memories in the basement. It took an extra push from a loved one for him to confront his vulnerabilities, allowing him to be liberated from his pain and move on in his life. The beautiful scene accompanied by the heart wrenching euphonic score was tear-jerking, and sweet watching him stand and dance with his departed love once again. The movie circles back to the magic of art, and beautifully ends the way it begins with the protagonist doing what he loves; painting.

The Rise of a Powerful, Diverse Voice in Animation

Canvas is stylistically and thematically reminiscent of Matthew A. Cherry’s Pixar film Hair Love, a beautiful and pioneering story about Black hair, which Abney was also a producer of. The similarities aren’t blatant, but the animation style, Black perspective, and message of being true to yourself ripple through both short films. Fortunately, the world will be able to see more of this impressive and alluringly glamorous animation style, with the diverse perspective having room and resources to expand because Hair Love is actually being adapted into an HBO Max series titled Young Love.

The release of Young Love, which is being creatively run by Matthew A. Cherry, will catapult HBO into the animation game too. It’s unknown if Frank E. Abney III will be involved in Young love. Netflix did a wonderful job at selecting Abney to spearhead their animation presence with his animation short, Canvas, and it’ll be interesting to see how they hold up amongst their competition. Especially since from the sounds of a colossal recent announcement in the entertainment industry, Netflix’s streaming dominance is being targeted by Disney, who not only have some of the most coveted content in the world, but they are, and always have been, the ultimate animation kingpin. With more content like Canvas, Abney may be able to slightly help balance the weight of that on Netflix’s side.

Frank E. Abney III’s supreme animation talent is expanding, with a resume that outshines most animators in the world, and his storytelling abilities along with his creativity is blossoming with it. Abney is a graduate of The Art Institute of California, San Francisco, with a degree in media arts and animation, along with doing extensive training with Animation Mentor, an online animation school. His first IMDb credit ever in the entertainment industry was for the video game version of Tomb Raider in 2013, but then quickly made his way into doing animation work for feature films. He’s contributed his animation skills to six Academy Award-nominated films, Frozen, Big Hero 6, The Boss Baby, Coco, Incredibles 2, and Toy Story 4. Aside from his solid gold curriculum vitae, Abney also was an animator for recent films Onward and the soon to be released Jamie Foxx and Tina Fey movie Soul. Abney is sure to continue growing as an artist and delivering high quality, heart-filled content.  Here at Hollywood Insider, we happen to be enormous fans of Frank. We are inspired by you Mr. Abney, we will always root for you.