‘A Suitable Boy’: Can this Magnum Opus be Condensed into a Series? 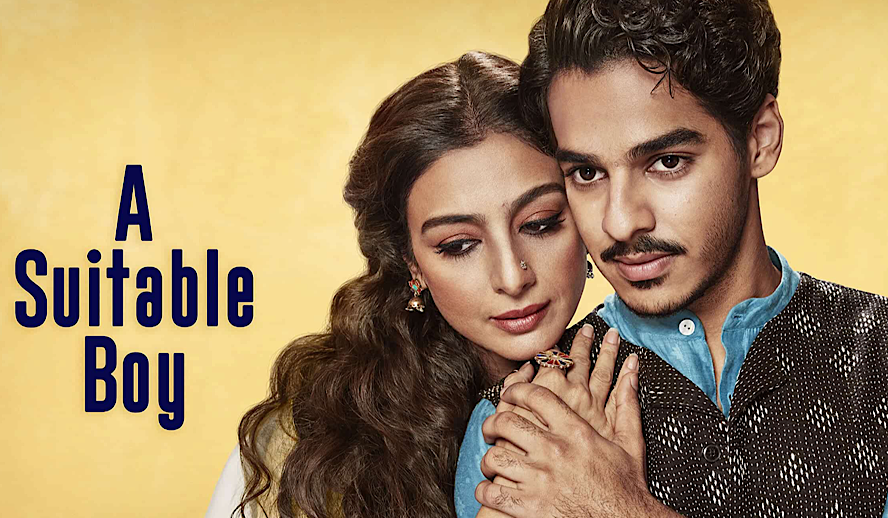 Vikram Seth is one of India’s most influential writers, with a Padma Shri (One of the highest civilian honors in India) win under his belt. His 1,349-page magnum opus called A Suitable Boy is one of his most famous books. It is known to be one of the longest novels in the English language and has achieved great critical success. A new BBC limited series by the same name aims to recreate Seth’s magic on the silver screen.

A Suitable Boy (2020) is a six-part series by famed Indian-American director Mira Nair and based on the Vikram Seth book. Nair has tapped a roster of star cast Indian actors such as Tabu, Ram Kapoor, Ishaan Khattar, Rasika Dugal, and Ranvir Shorey for this project. The story centers around Lata, a young college-going girl from the 1940-1950s whose mother’s mission is to find her a suitable match for marriage. The show is in the English language and is available with a Hindi dubbing with the original actors’ voices.

Related article: The Rise & Victory of Mira Nair: The Pride of Indian Representation in Cinema

Mira Nair is famous for bringing Indian stories to the international screen while staying true to the cultural elements of the story. She is also known to pick stories that resonate with her personally, such as her 2006 movie The Namesake, based on Jhumpa Lahiri’s 2003 novel which she credited with helping her through a time of loss. Similarly, she chose to take on this particular project since it was reminiscent of a time when her parents had newly gotten married and were part of her early childhood experience in India.

The show is filled with her signature direction elements, such as various sequences with long panning shots across rooms, depicting the chaos of an Indian household. The setup of the story is reminiscent of her 2001 critically acclaimed film Monsoon Wedding; a variety of relationships revolving around a central story about a wedding (or an impending marriage in this case). The story explores these inter-relationships across different cities such as the fictional city of Brahmpur, Calcutta, and Lucknow. The events are set up in post-partition India, with the sparks of Hindu-Muslim strife that were ignited during the British rule and the Partition unrest. The Indian sitar score is composed by famed British-Indian Grammy-nominated sitar player Anoushka Shankar, who is the daughter of legendary Indian composer Pandit Ravi Shankar. Veteran actors such as Tabu and Ram Kapoor shine in their respective roles, and Ishaan Khattar gives a promising performance in his third big project.

There are certain sequences in the show which stand out because of their beautiful distinct setup. A particular sequence of note is when Maan (Ishaan Khattar) and Saeeda Bai (Tabu) consummate their love and Lata deals with some issues in her love life. The sequence is set to a beautiful sitar score by Anoushka Shankar and ends with a gorgeous shot of a single tear falling out of Lata’s eye.

Was this series a disservice to Indian representation?

The show feels like a missed opportunity. Six hours seems too short to capture the complexity of the magnum opus. The multiple plotlines feel unexplored and devoid of closure, although there are some positives with the storyline. The show portrays the different kinds of love with a lot of depth and context. In Lata’s suitors, we see how each suitor brings out a different side of her, leaving her to choose which “kind” of love is the right one. With Maan’s affair, we see how a passionate love may lead someone down a path you never intended. The story also does give us a great view into the concept of the large intertwined Indian family, where the life decisions of each member are group decisions.

The chosen language format creates an affected and artificial air. In attempting to do justice to the book, screenwriter Andrew Davies’ dialogues have added inauthenticity to the series. While the book is of high literary acclaim, its verbiage may not necessarily translate to the big screen, which is how the writing was designed with lines that feel as though they have been picked up straight out of the book.

It is hard to resolve Indians speaking to each other in English constantly in a pre-globalization era. It is an especially jarring experience due to the use of literary phrases such as “ruffian” or “ignoble business,” which are too fantastical to reconcile with reality. If the use of English in the city can be excused as a symbol of the British colonizers who had only recently left, there are also scenes in rural parts of India with a more accented English which seems a bit too out of touch. It is important to note that in Nair’s perspective, this vernacular was an accurate representation of the language back in the 50s, which is why she agreed to the script’s design in its current form.

The language also causes issues with the actors, as it is clearly visible that they are speaking a second language that they are not comfortable with. The few scenes with Hindi and Urdu serve as a breath of fresh air, cutting through the affected air and showing us what the show could be. Comparing this show to Mira Nair’s other work, it does not feel like the same league. For example, in Monsoon Wedding, the language was perfectly realistic; the more cosmopolitan and international characters spoke English, whereas the rural characters spoke in Hindi, which is what India is actually like in the current day.  This show seems to be written for a Western audience, condensing Indian cultural attributes, and the sensitive issue of the tensions between Hindu and Muslim Indians into aesthetic elements, a few arbitrary scenes, and background noise. In fact, in an interview with renowned Indian film critic Anupama Chopra, Nair happens to mention how there was concern that Saeeda’s character would not be relatable to a Western audience since she originally spoke exclusively in Urdu. Due to this, she had to create a situation in the show which would make it possible, and plausible, for Saeeda to speak in English. This clearly demonstrates that she was made to sacrifice the authenticity of the story to favor a version more palatable to a Western audience.

For a person of Indian origin, this show clearly misses the mark.