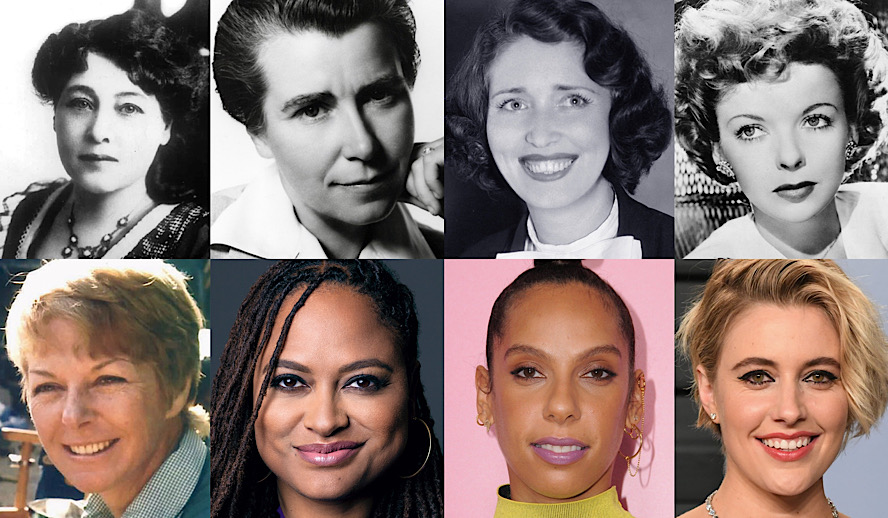 It comes as no surprise that Hollywood, along with many other fields has been dominated by men. However, this often leads us to neglect to explore the women who were involved in shaping the film industry from the past all the way to the present.

Beginning with Old Hollywood and the first female director, here are 8 barrier-breaking women who worked behind the scenes in the film industry, who have each played a role in shaping cinema.

Alice Guy Blaché was the first female filmmaker who created narratives through which she could express women’s desires, drives, and self-determination, even before women were allowed to vote.

She directed hundreds of films that shaped cinema, utilizing special effects, using close-up shots to enhance emotional impact, and insisting on an acting style that suited the media of film. Blaché constantly pushed thematic boundaries, exploring issues such as gender, race, and class.

Blaché’s film A Fool and His Money is wide-considered the first narrative film with an entirely black cast. This resulted when the white actors she had cast refused to act alongside black actors. Furthermore, her film A Man’s a Man displayed a sympathetic and rare depiction of a Jewish lead on-screen. Undoubtedly an early pioneer of the film industry, she is often simply relegated to a footnote as the first female director, when there was so much more to her story.

In the 1930s, Dorothy Arzner was the only female director working at a major Hollywood studio. She focused on telling stories that showcased strong female leads, who were driven to achieve their goals. Between 1922 and 1943, Arzner was a director, filmmaker, screenwriter, and editor.

Arzner herself reflected the characters she depicted, refusing to direct a film if she was not allowed to do so in her own way. Furthermore, she was the only female filmmaker to transition from silent films to talkies. Not only this, but her total body of work is larger than any other female director to date.

In the Golden Age, Virginia Van Upp was one of the few women to be in a leadership position at a major Hollywood studio. She was appointed as second-in-command and executive producer at Columbia by none other than Harry Cohn.

When told by Gene Kelly “You write just like a man,” Van Upp reportedly replied, “Writers of either sex are writers. They have to know people.” Van Upp played a large role in establishing Rita Hayworth as a star when Van Upp wrote and executive produced Hayworth’s career-defining film noir: Gilda.

Ida Lupino began as an actress—actually groomed by Warner Brothers to possibly be a replacement for Bette Davis. Lupino, however, found that she wanted more and so she formed an independent production company.

The films she made were low budget, but she dedicated herself to telling stories that were seen as controversial. These themes included polio, bigamy, rape, and unwed motherhood. Lupino sought to tell stories with a message and became a foundational voice in the history of independent films.

Before working her way up through the film industry, Geraldine Brianne Murphy created her own opportunities for success by taking many small film industry positions. In this way, she was able to gain insight into the filmmaking process as well as learn the mechanics of using the equipment.

Due to the difficulty she faced breaking into a male-dominated industry, Murphy often simply went by an abbreviated version of her name, “Brian” and talked in a deep voice on the phone. She also sometimes simply listed her initials “G.B.” in order to avoid revealing that she was a woman so that she could land jobs.

In 1980, Geraldine Brianne Murphy became the first female member of the American Society of Cinematographers. At this time, she was also the only female cinematographer for a major studio picture, Fatso.

Ava DuVernay, best known for directing Selma, was the first black female director to receive a Golden Globe nomination. Despite this great achievement, it was a tremendous disappointment and outrage when she was not nominated for the Oscar as the director of Selma. In order to champion films made for African American audiences, DuVernay founded the DuVernay Agency. Furthermore, she co-founded the African American Film Festival Releasing Movement.

Manohla Dargis even coined the “DuVernay Test” to challenge Hollywood’s lack of diversity in films. Similar to the “Bechdel test”—to see if a film has gender equality by seeing if two of the female characters ever have a conversation where they don’t talk about men—the “DuVernay Test” sees if the BIPOC characters in films have fully realized lives that are separate from the white characters in the narrative. In other words, are they actually their own fully developed characters, or are they only there to serve as a backdrop for the white leads? While this term was originally seen as simply a light-hearted framing device, it is useful to put films under these types of tests so that we can actively work to ensure that all films are racially diverse.

Melina Matsoukas got her start directing music videos. She has directed projects for well-known stars such as Lady Gaga, Snoop Dogg, Jay Z, Pharrell, Solange, and Rihanna, whose music video “We Found Love” earned Matsoukas an MTV Best Video award—making her the first solo female director to receive the award—as well as a Grammy for best long-format video.

Matsoukas remembers growing up and not seeing dark-skinned people depicted on-screen; she set about to change that. Her feature directorial debut—after directing Beyoncé’s “Formation” music video—was Queen & Slim. Matsoukas sought to redefine black beauty, and beauty in general. Through her work, she hopes to create change by reflecting the current times and struggles that marginalized groups face.

Shooting into the spotlight after her hit solo-directorial debut with the film Lady Bird, Greta Gerwig has become a staple filmmaker of current Hollywood. The story of Lady Bird demonstrates Gerwig’s wish to incorporate more real stories of girls who are just girls on-screen. She went to be acclaimed for her latest directorial pursuit, Little Women.

Gerwig sets an example for other women, encouraging them to follow their dreams. Breaking barriers with the stories she tells, hoping that one day we won’t have to qualify accomplishments with ‘female.’ By creating films based on her own experiences, Gerwig’s work provides a realism that truly resonates with audiences, particularly female audiences.

All of these women, whether intentionally or unintentionally, played a role in shaping what the film industry is today. While it is important to acknowledge and learn about these incredible women, we must also understand that there is a long road ahead to equality behind the scenes of Hollywood.