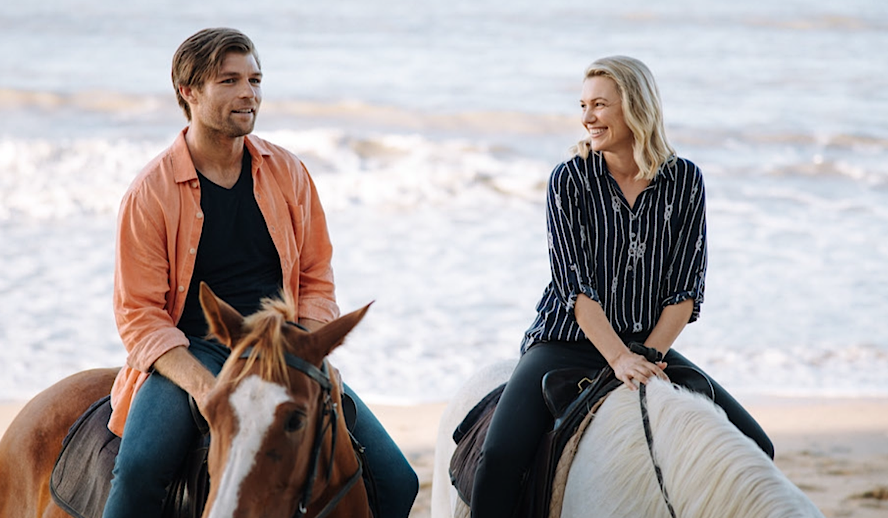 Photo: ‘This Little Love of Mine’/Netflix

New to Netflix this week is a romance film from director Christine Luby, ‘This Little Love of Mine’. The film follows a business lawyer named Laura, played by Saskia Hampele, as she returns home to a tropical island, Sapphire Cove, to convince an old friend, Chip played by Liam McIntyre, to replace his grandfather as the head of a billion-dollar company. When returning home and a reunion with Chip sparks feelings Laura did not expect, she must make a choice as to what path she will choose for her life to take.

‘This Little Love of Mine’ is a very easy-breezy film. The movie feels very much like a Hallmark film which I do not mean as a negative, just an assessment of the tone and plot conventions. The film has a clear audience and a very specific story it wants to tell. To the film and the filmmaker’s credit, the film knows exactly what it is and what it hopes to achieve, and in that it succeeds. While that will leave some audiences disappointed and wishing for more, the film will live up to expectations perfectly to those who are engaged by its subgenre of film.

‘This Little Love of Mine’ — What Worked

As previously stated, ‘This Little Love of Mine’ knows exactly what it is and does not attempt to be anything other than that. While not everyone’s cup of tea, there is most certainly an audience that will fall in love with this film and its characters. Starting with the plot, while not remarkably original, the formula of woman returns home to become a fish-out-of-water in her own hometown is tried and true with successes such as the classic Reese Witherspoon romantic comedy ‘Sweet Home Alabama’ that also starred Josh Lucas, of the Matt Damon led ‘Ford v Ferrari’, and Patrick Dempsey, of ‘Grey’s Anatomy’ and ‘Transformers: Dark of the Moon’. While generic, the film’s plot is serviceable enough and allows for some stunning locations and visuals.

The island of Sapphire Cove is truly a sight to behold and adds a beautiful visual aesthetic to the film. The locations also allow for some very cool sound design as you can hear the wind whistling through the leaves of the palm trees and the ocean waves crashing on the sandy beaches. Technically the film is sound; the editing is tight and efficient. The opening of the film tries some experimental transitions that I found an interesting choice. The cinematography is very competent in the film; while not Roger Deakins shooting ‘1917’, the film is shot by someone who clearly has a good handle on their craft.

The characters of the film are all endearing and entertaining enough to watch. Our protagonist, Laura, has a very clear character arc that did feel earned by the conclusion of the film. Saskia Hampele, who appeared in ‘A Few Less Men’ opposite ‘Stranger Things’ actor Dacre Montgomery, does a great job of bringing a likability to the role of Laura. Her co-star Liam McIntyre, who portrays Weather Wizard on the CW DC Comics superhero show ‘The Flash’, also does a very good job of bringing charm and charisma to his character. Similar to Laura, the character of Chip has a very specific and defined arc that while a tad generic did have me rooting for the guy.

McIntyre does well in the comedic moments of the film, especially when his character is placed in awkward situations. The chemistry between Hampele and McIntyre is another positive the film has to offer — without the chemistry these two performers put together, this film would not have a leg to stand on. The writing of the film has a very upbeat, bounciness to it. The whole film breezes by very quickly with a very nice and concise pace. The film does not waste time in telling you its story and the filmmaker’s efficiency in their storytelling is notable.

What will be the selling point for this film to many will be its Achilles heel to everyone else. While the film’s plot may have its appeal, it is at the end of the day very generic and does not end up offering much new or innovative; this is a general problem for the film as a whole. While the character arcs are very specific, they are also equally as played out and feel very by the numbers in terms of the romantic comedy genre. Another issue that arises from a convention of the genre is how the characters deal with problems. All the characters in the film feel incredibly too upbeat and energized in the face of adversity which felt a little unnatural. While the characters’ arcs felt compelling enough, their effectiveness wavers along the way as they start to feel more and more like written characters rather than real people.

The film has a very commercial feel to it as well, both in terms of appealing to a white audience as well as actually looking like a commercial on television. There are no big risks taken that may subvert audiences’ expectations which felt a little underwhelming. The filmmakers apply a very distinct yellow coloring to a lot of the outdoor beach shots that also felt like too much to handle making the scenes feel more like a vacation advertisement than a film.

Now while I personally wanted the film to make an effort to try and delve deeper into its plot and characters, many will not share my same opinion and find the characters likable enough and the plot fun and digestible; while our opinions differ, I would not argue the merit some would see in this movie as it embraces its role as a fun, easily watchable romantic comedy. The film is not without its positives, having two charismatic performers in its lead roles as well as beautiful locations and an effort to craft specific character arcs. While this is not a film I will likely revisit, if you are a fan of this kind of film I would recommend you give it a chance as it will probably be one of the better watches you enjoy of that kind of film.

Check out ‘This Little Love of Mine’ on Netflix today. Be on the lookout for Saskia Hampele’s next film, ‘The Reef: Stalked’ from director Andrew Traucki.