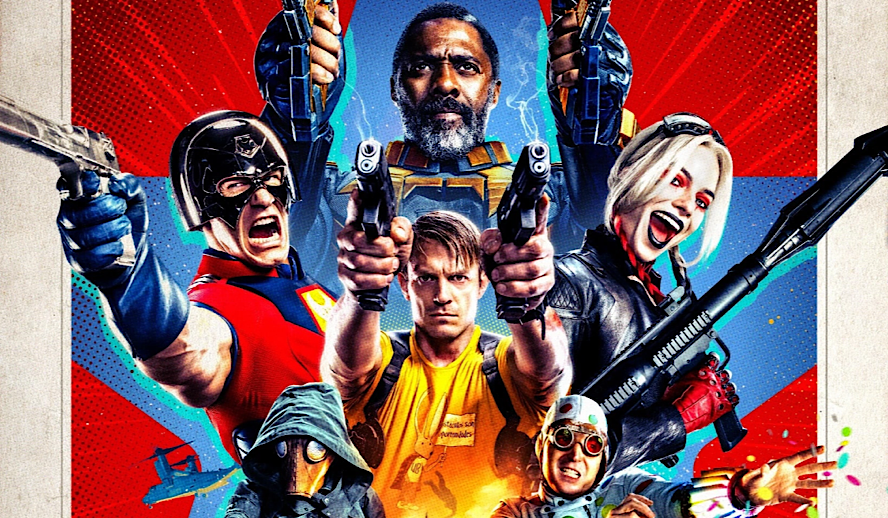 Few films have had a rockier road to existence than the latest outing in the ever-contentious DCEU; ‘The Suicide Squad’ (2021). Five years ago, audiences revolted against a studio-slaughtered corpse of the same name (though crucially lacking a definite article – arguably the film’s biggest failing), David Ayer’s ‘Suicide Squad’ (2016). While readily massacred by merciless critics and disheartened fans, the Oscar-winning (?!?) neon-laced nightmare wound up grossing three-quarters of a billion dollars at the global box office, proving that even if Ayer’s monstrosity woefully failed in execution, the bare bones held a clear recipe for success in better hands.

‘The Suicide Squad’ – Full Commentary & Behind the Scenes + Reactions

Fresh off the resounding success of ‘Guardians of the Galaxy Vol. 2’ (2017), director James Gunn was released from the final film of the trilogy due to the rediscovery of a series of offensive tweets from nearly a decade prior, DC swooped in to recruit him as a last-ditch savior for their haphazard universe of loosely-connected misfires. A day after the announcement Gunn would be working on a new film for the studio, Marvel sheepishly retracted their decision and reinstated the director to his post on the final ‘Guardians’ volume. But it was too late to save Gunn from falling to “the dark side”, his pact with Warner Bros. brass rapidly spiraling into the powder keg of unadulterated anarchy and glorious carnage that is ‘The Suicide Squad’.

‘The Suicide Squad’ – Full Commentary and Behind the Scenes

The film’s tagline – “Don’t get too attached” – sounds easy enough at the outset, that is until one remembers that ‘The Suicide Squad’ comes from the same man who duped millions into ugly-crying over a walking tree and sarcastic raccoon, a feat remarkably replicated with the likes of King Shark and Polka-Dot Man. After a thoroughly vicious false start in the first five minutes, the film paints a dazzlingly distasteful portrait of DC’s most head-scratching rogues infused with genuinely affecting backstories and forced on an impeccably eccentric mission sure to get most of them killed along the way. Returning from the previous film are standouts like Viola Davis’ cold-hearted Task Force X director Amanda Waller, Joel Kinnaman’s resolute squad leader Colonel Rick Flag, Jai Courtney’s unhinged Australian super-thief Captain Boomerang, and Margot Robbie’s psychotic show-stopping clown princess of crime Harley Quinn.

Robbie brings her trademark manic charm to the character she has now inhabited three times on the big screen (equal to the likes of Henry Cavill’s Superman and Ben Affleck’s Batman), spearheading what can objectively be described as one of the best action set pieces in the history of comic book movies. Elba and Cena are additionally competent as their respective assassins, locked in a sick game of murderous one-ups that culminates in an extremely rewarding final confrontation. The rest of the squad are each given their own moments to shine, but the film’s true star (as well as its heart) is none other than up-and-coming unknown Daniela Melchior as Ratcatcher 2. Alongside her loyal rat companion Sebastian, the character endears herself through both her sincere benevolence and heartbreaking upbringing. Her father, Taika Waititi’s Ratcatcher 1, invented the technology she employs to control the scorned rodents in the hopes of proving that even the lowliest of creatures had a purpose, a sentiment that truly unites the team and expertly literalizes the movie’s overarching themes.

For better or worse, ‘The Suicide Squad’ represents the epitomized culmination of James Gunn’s directorial career. The film is at once a complete synthesis of both Gunn’s inventive blood-soaked early work ‘Slither’ (2006) and ‘Super’ (2010) alongside his recent mainstream Marvel productions replete with a band of improbable renegades and scored by a series of chalky 1970s needle-drops. A certain frenzied energy courses through every frame of Gunn’s latest film, the sense that the director was immensely relieved to have shed Marvel’s dogged enforcement of PG-13 swarm and sought to squeeze every last ounce of obscenity from his newfound freedom never straying too far from one’s brain.

Every bullet fired or punch thrown is unsparing, the camera lingering on each inch of viscera and relishing every unseemly splatter. The infiltration of the freedom fighters campsite, Harley’s aforementioned escape from the General’s fortress, a ruthless showdown between Flag and Peacemaker, and the final fight against Project Starfish all number among the best action setpieces of either dueling comic-book studios, featuring consistently outstanding choreography that meshes perfectly with the film’s sprawling sets. The combat is further improved upon by alluring cinematography from frequent Gunn contributor Henry Braham, adding a vital visual flair to the film that helps keep it feeling cinematically fresh throughout.

Despite all of this, there are a few spots in which the film treads in decidedly murkier waters. For starters, the native Corto Maltesians are given little to no agency in the film, existing solely as bodies to be either butchered by the squad or possessed by a certain alien entity towards the end of the film. Even the freedom fighters with whom the squad must work to take down the new regime are little more than cardboard cutouts with no tangible presence in the film (a fact acutely accentuated after the final rebel militiaman working with the villains is killed, Harley remarking she didn’t even know that he had still been with them). On top of that, the previously mentioned fact that Elba is playing little more than a xerox replica of Smith’s Deadshot that changes little more than the color of his armor is simply a consistent distraction sure to pull audiences out of the story if they stop to think about it for any more than a moment.

It’s been reported that Elba had originally joined to replace Smith as Deadshot but that decision was quickly altered to allow for the latter actor to potentially return in a future installment. The strange part is that Gunn apparently did not see fit to tweak Elba’s character in anything but name, straddling him with the same subplot of a disappointed daughter waiting for him on the outside and ability to turn anything into a deadly projectile weapon with peerless aim. While the decision certainly does not derail the entire film, it does remain one of its biggest enigmas, as one cannot help but think of all the unique characters Elba might have skillfully personified had Gunn taken a day or two to go back to the drawing board and pull out yet another ridiculous gem from DC lore.

With Gunn’s ‘The Suicide Squad’ spin-off ‘Peacemaker’ set to release in January of 2022 and DC Films President Walter Hamada recently stating the director would be back with more related films in the future, it’s clear that the film represents the capitalization of the studio on a clear new direction (the first it has had since the sacking of Zack Snyder and his respective vision for the universe in 2017). While the film doesn’t appear to directly set up the likes of Leslie Grace’s ‘Batgirl’ (2022) or Xolo Maridueña’s ‘Blue Beetle’ (TBD), it does offer a unique window into the big swings the studio is willing to take with both its talent and its characters going forward.

As it becomes evident the studio has given up the hopes of creating the cohesive multi-film narratives or interconnected storylines that define its MCU counterpart, ‘The Suicide Squad’ represents a bold declaration that a charismatic cast and creative team with some reckless vision may indeed be enough to satisfy the die-hard fandom and casual moviegoer alike. Because if a movie starring Polka-Dot Man can make a profit, then quite literally anything is possible for DC going forward.