‘Jungle Cruise’: Emily Blunt and The Rock Bring Humor and Charisma on this Outlandish Trip 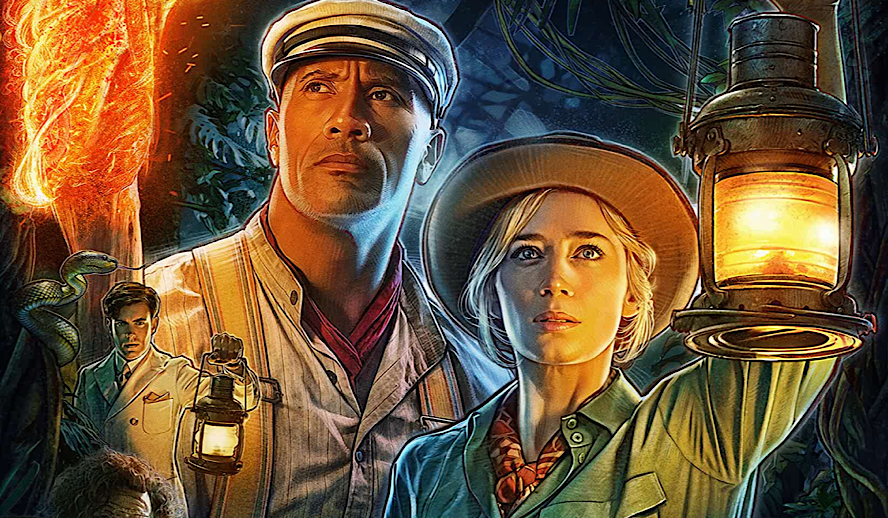 Well, it’s that time again. It’s the summer box-office season, so it’s time for Disney’s annual blockbuster where they take one of their pre-existing properties and try to turn it into something new! We’ve seen it with the movies based on park rides, the live-action remakes of the old Disney classics, and everything in between. Only this year, we have two of them. ‘Cruella’ came out back in May to positive reviews, so it’s time to see if Disney can run it back with their next and newest remake, ‘Jungle Cruise’.

‘Jungle Cruise’ is based on the beloved theme park attraction of the same name that resides in their parks. It is the fourth Disney film/franchise to be based on one of their theme park rides, the other three being ‘The Haunted Mansion’, ‘Tomorrowland’, and the popular ‘Pirates of the Caribbean’ movies. Despite the previous theme park movies being mixed bags of either greatness or utter soullessness, ‘Jungle Cruise’ leans itself more towards the former. The film has fun with its story and gives its audience pretty much what they’d expect from a film of this nature. It might not completely shake up the formula for the “action-packed adventure movie for kids” genre, but it’s still a good time in the theater, and a great film for those of all ages to see.

An Adventure Through Treacherous Waters

Starring Dwayne “The Rock” Johnson, Emily Blunt, and Jack Whitehall in the lead roles, ‘Jungle Cruise’ follows Dr. Lily Houghton (Blunt) and her brother MacGregor (Whitehall) in the early 20th Century as they travel through the jungle in search of the “Tears of the Moon”, a magical tree that is said to have the ability to heal people with its petals. In need of a skipper to help them traverse through the rough waters of the Amazon, they hire Frank Wolff (Johnson) to get them to their destination and find the tree, all for the purpose of furthering modern medicine. Meanwhile, a German aristocrat named Prince Joachim (Jesse Plemons) is also searching for the tree in the hopes of using it to benefit Germany in the ongoing First World War. Lily, Frank, and MacGregor must fight off the dangers of the forest, both natural and mystical, in order to find the tree, all while dealing with the wrath of Prince Joachim and his allies.

It’s a pretty standard adventure movie, but one that has a lot of fun with its simple premise. It feels a lot like a ‘Pirates of the Caribbean’ movie, but with more nature and with Dwayne Johnson as the lead rather than Johnny Depp. Speaking of The Rock, his performance here was very entertaining. As the captain of his ship, he embodied the atmosphere of the ride that so many Disney fans know and love. He was snarky but also adventurous, cracking terrible dad jokes that fans of the attraction would appreciate. His acting was somewhat rigid, but The Rock has never been seen as the epitome of acting. He’s not an actor, he’s a movie star, and he brings so much confidence and charisma to his performance that he fits right in as the lovable skipper in charge of this voyage.

Emily Blunt also took charge in her role, playing Lily’s adventurous, headstrong attitude with natural ease. Blunt has proven time and time again that she’s a great leading star, and ‘Jungle Cruise’ proves it yet again. Lily is confident in herself, willing to go to great lengths to reach her destination, and her frustration with trying to get there feels real. Blunt and Johnson have great chemistry together and it’s visible with their characters, always bickering and making witty remarks at one another. Jack Whitehall rounds out our riverboat trio as the elegant and reluctant brother who tags along for the adventure. He brings a lot of humor to the movie as the man who clearly has no desire to be on this trip, and he plays well off of the other two stars. Together, along with the cartoon-ish energy that villains like Jesse Plemons and Paul Giamatti bring, it all makes for an entertaining time in the theater.

The Problem With ‘Jungle Cruise’: Less is More

‘Jungle Cruise’ is basically a quest story, one with perils and villains that make it feel reminiscent of an old adventure movie. The whole thing feels like a lesser version of ‘Raiders of the Lost Ark’, but that isn’t to say the film isn’t enjoyable. There’s danger and deceit everywhere, and the movie really puts emphasis on the difficulty the three adventurers face on their quest. Lily and Frank make a great pair when fighting off snakes or mercenaries or other types of adversaries out there, but can she trust him? Frank offers to help Lily and MacGregor on getting to the tree, but he has secrets of his own that might prove to be detrimental to Lily’s quest.

The weakness of the film lies in its effort to escalate the mission. ‘Jungle Cruise’ relies too much on thickening the plot with magic and supernatural creations, and the movie feels worse off for it. Quite honestly, I really enjoyed the first half of the movie, where the whole thing felt like an old-school adventure flick with a little bit of magic to put everything on a grander scale. But near the end of the second act, the film became less vintage and more outlandish, and that’s where it started losing me. Don’t get me wrong, ‘Jungle Cruise’ is still a whole lot of fun to watch. But once the story became less similar to the original ride and more like a magical quest with mystical beings, the whole film felt weaker as a result. If this ever becomes a franchise (and I wouldn’t be surprised if it did), I hope they keep everything in the original spirit of the Jungle Cruise ride and focus more on the exploration and adventure than the otherworldly.

All in all, ‘Jungle Cruise’ is a good movie, one worth watching in theaters or at home. The Rock and Emily Blunt have amazing chemistry together and it would be nice to see Disney make a sequel to the movie just to see these characters alone. However, the film becomes too ambitious and tries to add more than necessary to this Amazon adventure. Sometimes it’s best to keep things simple, and that is definitely the case for ‘Jungle Cruise’ here. In the end, children will love it, and many Disney fans will have a good time with it as well. Is this the beginning of a franchise? Who knows. But if it is, the characters and the world make this film worth watching, and I’m interested to see if anything comes next.

‘Jungle Cruise’ is available now in theaters and on Disney+ with premium access.