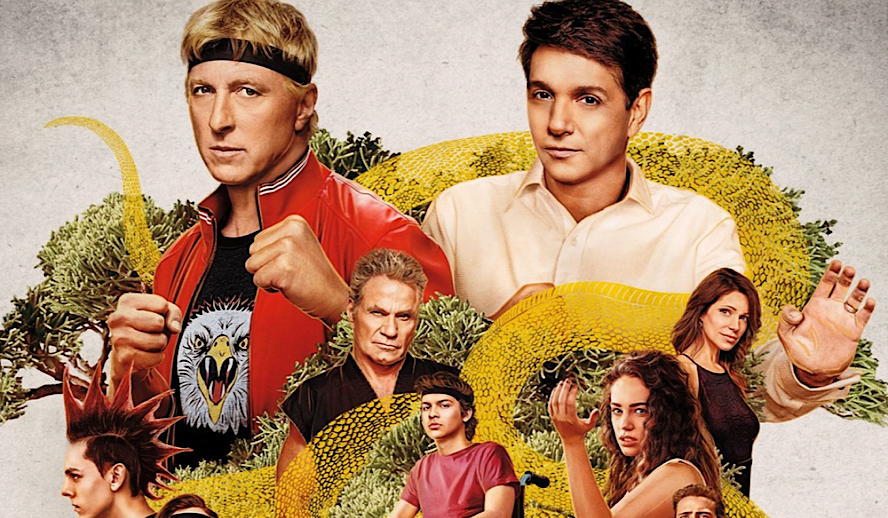 ‘Cobra Kai’ Makes Its Debut as a Netflix Original Series

The hit ‘Cobra Kai’ series recently returned for its third season—this time debuting directly on Netflix. Originally released as a YouTube Red original series back in 2018 (which has since been rebranded as YouTube Premium), ‘The Karate Kid’ spin-off series’ first two seasons were later added to Netflix’s library in August 2020, until officially becoming a Netflix show on January 1, 2021.

The series’ first two seasons were met with overwhelmingly positive reviews from both fans and critics alike: Season 1 currently boasts a perfect “100% Fresh” rating on Rotten Tomatoes, while Season 2 followed up with a strong “89% Fresh” rating the year after. The series’ overwhelming success as a ‘Karate Kid’ spinoff is in large part due to its cast—bringing back hot-headed Johnny Lawrence (William Zabka) and the series’ lead Daniel LaRusso (Ralph Macchio) to once again square off in California’s Valley. In addition to the series’ two lead stars, Season 3 brings back a lot of the show’s regulars—including actors Martin Kove (John Kreese), Xolo Maridueña (Miguel Diaz), Tanner Buchanan (Robby Keene), Mary Mouser (Samantha LaRusso), Peyton List (Tory Nichols), among others, but it’s the season’s surprisingly large amount of ‘Karate Kid’ cameos that bring life to an otherwise uneven latest instalment of the martial arts-themed show.

A Season Stuck in the Past

Understandably, Season 3 opens by exploring the fallout from Season 2’s climactic finale—the all-out high school brawl that left Miguel Diaz seriously injured, Samantha LaRusso deeply traumatized, forced Robby Keene to go on the lam, and Tory Nichols to be expelled from school. While there’s much to discuss following these events—such as Miguel’s struggles with overcoming his coma, Robby’s troubling behavior, and Tory’s efforts to provide for her struggling family—the season, unfortunately, takes too long dwelling on what happened at the end of Season 2. Half the latest season—more or less 5 of its episodes—is spent exploring characters’ emotions following the infamous high school brawl without moving the plot forward, causing the show’s pacing to significantly suffer. Strangely enough, much of the season lacks the very thing that makes the show so great to watch in the first place—action-packed karate.

One of Daniel LaRusso’s main storylines—to save his prized car dealership—is hit and miss as well. While this subplot eventually leads to genuinely heartfelt and exciting reunions, later on, the viewer can’t help but see the car dealership storyline for what it is—a clumsy, and honestly uninteresting, plot device. Daniel does at one point explain his strong and nostalgic attachment to cars—how the late Mr. Miyagi taught him the value of discipline through cars, and even gifted Daniel his first retro automobile—but this sentimental story still isn’t enough to make the viewer invested in the season’s prolonged, and ultimately forgotten, car-related subplot. Daniel’s career as a used car salesman has admittedly always felt a bit random for the show, and at the end of the day, fans of ‘Karate Kid’ didn’t fall in love with the series due to its cars—it was because of the film’s successful combination of martial arts, a relatable underdog story, and heartfelt relationships.

Despite only being a co-star in the original ‘Karate Kid,’ Johnny Lawrence continues to be, by far, the strongest part of the spin-off series. William Zabka’s effortless performance as a down-on-his-luck and estranged dad, looking to right his past wrongs and inspire a new generation of fighters along the way, serves as the heart of the entire show. A character with a lovable chip on his shoulder, Season 3 builds on Johnny’s arc of trying to overcome his past and do some actual good for the people around him—especially Miguel and his family. William’s performance also provides the show with its strongest laughs, and the actor often elevates the performance of every actor around him—even the far more well-known Ralph Macchio.

‘Cobra Kai: Season 3’ dazzles fans of the original films by including genuinely surprising and awesome cameos throughout its ten episodes. Without giving too much away, the season’s cameos feature Daniel LaRusso’s childhood rivals, love interests, and even surprisingly minor, but welcomed, characters—all of whom provide the season with beautifully rich and heartfelt moments. The season’s latter half makes for an especially rewarding watch for fans of the original ‘Karate Kid’ films.

Regarding the show’s new generation of fighters—including Miguel (Johnny’s protégé), Samantha (Daniel’s daughter), Robby (Johnny’s son), and Tory (Samantha’s arch-nemesis)—the result is an unfortunately mixed bag of performances. Most of the scenes at the kids’ high school tend to drag and hurt the show’s flow—character A hates character B, character C fights character D, rinse, and repeat.

While these moments do a fairly good job establishing these younger characters’ motivations, fears, and goals, the viewer often finds themselves waiting for the show to get back to its roots—focusing on Johnny’s journey toward redemption, Daniel reminiscing over Mr. Miyagi’s teachings, and the ever-present threat of Cobra Kai and John Kreese (Johnny’s old Cobra Kai sensei). The teenage characters do their best to provide the season with high-stakes fights and complex relationships, but the result often comes off as melodramatic and even awkward to watch at times. Aside from Miguel, the younger characters simply aren’t strong enough to pull the show on their own, making the viewer realize just how dependent the series really is on its original ‘Karate Kid’ stars.

One of the most surprising and welcomed subplots of the season is John Kreese’s origin story, where the show explores the man’s tragic path toward a life of “No Mercy, No Fear.” Using well-crafted and well-acted flashbacks, the franchise finally provides crucial context to the battle-worn and aged sensei—causing viewers to see his character like never before and challenging fans’ prior perceptions of the film series’ classic villain.

A Slow Start, but Worth the Watch—Especially for Fans of ‘The Karate Kid’

‘Cobra Kai: Season 3,’ much like Season 2, unfortunately never quite hits the highs of the spinoff’s inaugural season. The new episodes take too long dwelling on the fallout from Season 2, and Daniel’s strange car dealership subplot feels too tacked on and is ultimately unimportant. The series tries its best to incorporate its younger stars into the story—whether through bitter rivalries, love triangles, or the daily stress of high school life—but with largely uneven results. The season does set itself up nicely for Season 4 (which has already been confirmed by Netflix)—with Season 3’s rivalries being thoroughly explored, battle lines drawn, and tensions higher than ever before—but viewers will have to wait and see if the latest season’s cliffhanger ending actually ends up paying off.