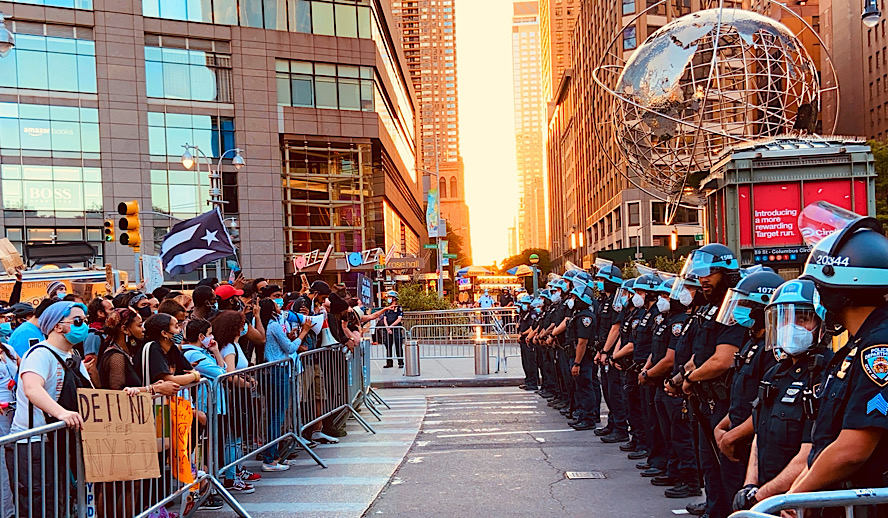 Photo: Black Livest Matter protesters peacefully face-off with NYPD as it has been guilty of police brutality, in front of the Trump International Hotel & Tower New York as the metallic globe looks on, while they demand police reform to end police brutality. Photo Credit: Hollywood Insider Staff Photographer

It’s both expected and shocking – police brutality! When you see the man, the human life, George Floyd, crying out for help, you almost can’t believe your own eyes, yet when you think about the state of the U.S., you aren’t surprised either. It’s a paradox of one’s own understanding.

At the rate 2020 had been moving, it is even less surprising that the pinnacle of chaos would be now. It’s horrifying but logical. You don’t have to agree with the rioting and looting (violence is never the answer), but what did you expect? People angry for decades, pent up in their homes, the climate of social issues continuing to rise, this is what happens. When you’re put in a boxing ring with no training and the enemy swings at you over and over again, you fight back. But without training you flail your arms, creating chaos and an inability to be strategic, but you might win regardless, and more importantly, you catch the attention of your opponent. It’s wrong, but that doesn’t mean it can’t work. Police brutality is a real problem and the oppression has continued for far too long.

It’s been a hectic and emotional two weeks, and I’ve had much time to mull and think about what should be said. People have different perspectives and viewpoints on what should be done in order to bring about justice. If you go on social media or look at the various signs that protesters are carrying, the values and reasonings vary from person to person. The looting, riots, and widespread death that have been raging in response to the injustice has drowned out the actual message many feel is necessary – which is police reform to end police brutality – but it is also about more than just police reform. So for those of you unsure (like many I’ve talked to) and wondering what is the main message that should be spread, I’m here to bring clarity to the issue and explain the main outcry of change being demanded.

Related article: Live Updates: List of Successes From Black Lives Matter Movement to end systemic racism! – The protests are working. This is a marathon and peaceful/non-violent protests are advised to end police brutality and more injustices

First: There Has Been an Injustice – Police Brutality

What happened to George Floyd isn’t the first, and in our broken world, sadly won’t be the last. That doesn’t change the horror and injustice that occurred during the fateful day in Minneapolis. The four men responsible have been charged and hopefully will receive their due. If they do, we can say justice has in that specific moment been enacted. However, there is much more action to be taken if we genuinely want to course correct the ship.

Of course, Black lives do matter and there are those in our nation who are sadly racist, some of which are in the police force. Racism exists and that is a harsh truth, a truth that will never be 100% removed. People like George Floyd, regardless of their past, more and more are being seen and given a voice. That’s just the tip of a massive iceberg.

The Ugly Truth of Police Brutality

Through all the muddied waters, police reform is the biggest talking point for many protesters – a point I can very much get behind.

Police brutality towards Black people, and all human life in general, has been so common it saddens me that it took this long for people to realize the corruption within the police system. There is systemic corruption inside the general police forces nationwide and a cycle that comes out of that corruption is this: officers abuse their power, and the officers who don’t abuse it, in turn, stay silent, being “loyal” and protecting their own. This is the reality. Do you wonder why so many movies and shows regularly portray corruption in government? It’s because it exists! And police brutality cannot be tolerated any longer. Period.

Related article: Good Cop Stephen Mader Fired For REFUSING to Shoot A Black Person – This is why the black lives matter protests and movement are important to end police brutality

But not all police are like Derek Chauvin and his three accomplices. I know many good men and women working day and night to help their communities. Not all cops are bad, not all are racist. But brutality is too often a story we hear from the police force, especially in cities. The discipline they receive equates to a slap on the hand, it’s insulting to the people looking for justice. What about Stephen Mader, the cop that was fired for refusing to shoot and kill an innocent black man?

How can we change? How can we end police brutality and commit to police reform? Is Police Reform Possible?

Most definitely. And there is a name for it: 8 Can’t Wait.

Though I am no stat expert, there are eight points being promoted for police reform that would, in theory, drastically decrease police violence by supposedly 72%. Sure, 100% would be nice but that’s not gonna happen for many reasons I won’t get into.

But what are those points?

– Exhaust All Other Means Before Shooting

– Require Use Of Continuum

To learn more about statistics and info, click here.

All that to say, what does all of this mean?

Well, banning all chokeholds is straight forward, as is warning before shooting, exhausting all options, and banning firing on vehicles, etc. The other slightly wordier points need explanation. Sure they sound good but what does it look like in action.

Related article: Being Black in USA – “We are laughed at by our own “justice” system” – Police Brutality has to be eradicated

De-escalation, simply put, is any given officer must be overly communicative with subjects, keep a solid distance, and eliminate threats without any force. The duty to intervene springs right back to Floyd, requiring officers who see excessive force to put it to a stop and report that officer asap. The use of continuum is a basic training of officers in order to help them learn what rare instances require violence and force of some kind. By doing this in a clear and detailed manner, officers will hopefully have a clearer understanding of which circumstances call for what actions (though I’ll have more thoughts on this). Finally, comprehensive reporting ensures officers write down every detail surrounding an event in which they used or threatened to use force. Even if all goes well, they must report all actions taken.

I myself have some more thoughts on how we can help limit police violence to only necessary (because honestly there are criminals out there that require those necessary instances sadly). In connection to the use of continuum, I know I’m not the only person who may have been amused in some way that a lawyer endures eight years of training, while officers require much less time. It’s a joke in some ways. So not only should they be given intensive training on the force, they should be put through a longer process if only a year’s worth (double the time it takes now). Again, I’m no expert on learning the law, but these officers have a lot of power, we as the public aren’t going to be comfortable knowing that, though it may be a rigorous six months; that seems like an awfully short amount of time to be given a gun and badge.

My other point is in relation to the systemic corruption I mentioned. With so many officers covering each other’s mistakes and staying mum on criminal actions taken by their colleagues, the fact that the police departments do their own investigating is outrageous. An external, unbiased group should investigate any possible issues in regard to police violence or any other possible scandal. This is what leads to slaps on the hand in the first place.

If we can put those eight points in place alongside those two other ideas I threw out there (points I believe are understanding of the necessary force required in situations but cracking down on the power officers hold), I genuinely think much progress will be made in our nation as a whole. It will allow officers to function with more responsibility, and a newfound respect for workers in blue will birth out of this.

Necessary actions must be taken. Or more injustices like George Floyd will happen, and those in blue will be covered in the blood of those who cry out for help.

Hollywood Insider’s CEO/editor-in-chief Pritan Ambroase affirms, “Hollywood Insider fully supports the much-needed Black Lives Matter movement. We are actively, physically and digitally a part of this global movement. We will continue reporting on this major issue of police brutality and legal murders of black people to hold the system accountable. We will continue reporting on this major issue with kindness and respect to all black people, as each and every one of them are seen and heard. Just a reminder, that the Black Lives Matter movement is about more than just police brutality and extends into banking, housing, education, medical, infrastructure, etc. We have the space and time for all your stories. We believe in peaceful/non-violent protests and I would like to request the rest of media to focus on 95% of the protests that are peaceful and working effectively with positive changes happening daily. Media has a responsibility to better the world and Hollywood Insider will continue to do so.”