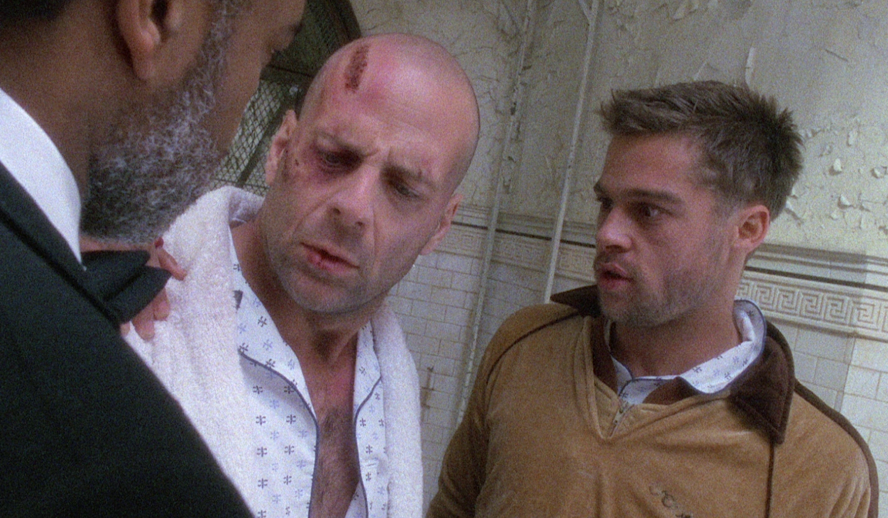 ’12 Monkeys’ or ‘Twelve Monkeys’ is a dystopian science-fiction film from visionary director Terry Gilliam (“Brazil”, “Monty Python And The Holy Grail”). It stars Bruce Willis as a man who lives in underground confinement in a pandemic-ridden (sound familiar?) future, and who is sent back in time to prevent the virus from ever happening. The result is a strange, surprisingly internal foray into dreams, madness, and a whole lot else.

’12 Monkeys’ – More Relevant Than Ever

As post-release relevance goes, ‘Twelve Monkeys’ feels suddenly prescient given our current global situation. It bemoans humanity’s inability to deal with global problems in a sensible, cooperative manner. Everything about the film foregrounds madness and carelessness as our species’ defining features. If you want comfort, ‘Twelve Monkeys’ is not it (unless you take comfort in watching a world that is even more messed up than ours).

One of the main things that separates ‘Twelve Monkeys’ from other dystopian fare is its director. If you’ve seen ‘Brazil’ (which I highly recommend), you will be accustomed to just how unique Gilliam’s mind is. The level of visual detail is a cut above most sci-fi films. In an age where CGI dominates, it is wonderful to watch a film where hand-made creativity is so clearly championed. The camera always seems to be tilted and close to characters in a way that is completely unto-itself – if you know, you know. If you are a fan of auteurial directors, this film and Gilliam’s wider filmography are surely worth a watch.

Though it is a familiarly apocalyptic tale on the outside – ‘Twelve Monkeys’ is a surprisingly internal, mind-bending presentation of madness at its core – James Cole needs to be sent back and forwards in time to stop the disaster but is left questioning reality as a result of doing this. The film succeeds in making you question him, and the world of the film as a result. Additionally, the first act of the film is largely spent in an asylum which heavily evokes ‘One Flew Over The Cuckoo’s Nest’. All of the characters are confronted with the idea of madness – Jeffrey (Brad Pitt) is the most overtly deranged character, but even Kathryn (Madeleine Stowe) is forced to question her sanity during the events of the film. The audience is constantly forced to think about the world’s reality (think ‘Inception’) in a way that keeps the story engaging and leaves a lasting impact.

This internal experience is also achieved through the prevalence of dreams. The entire conclusion is a very clever spin on a reoccurring dream we see appearing throughout the film. The protagonist’s journey is in many ways, an attempt to escape a reality that will inevitably force itself on him. Much like he did in “Brazil”, in “Twelve Monkeys” Gilliam achieves emotional impact through the exploration of the subconscious.

As it is also a time-travel film, “Twelve Monkeys” does disorient in exactly the way you would hope. Like in ‘Tenet’, the different temporal machinations and conveniences are quite difficult to grasp on a practical level. However, unlike ‘Tenet’, this does very little to damage the film’s emotional impact. If you like time-travel films, you will likely enjoy what Gilliam brings to the table, just as long as you can accept the possibility for it to confuse.

As a result of being so wacky, it is worth noting that ‘Twelve Monkeys’ is actually very funny. It might not seem like it would be on the outside – the idea of ‘Monty Python And The Holy Grail’ (which Gilliam also directed) having anything to do with this premise is itself, ridiculous. But in actual fact, so much of the absurdity of the film (even just at the visual level) is oddly reminiscent of the type of humour the Pythons championed. Both share a clear love of all things absurd – the difference is that ‘Twelve Monkeys’ sense of humour is in service of a far darker, more concerning message.

Good Cast, But Willis Stands Out

The film’s cast is surprisingly high-scale given the indie, outsider vibe of its content. Brad Pitt’s casting in an against-type role is immediately grabbing. Christopher Plummer gives a good performance as the virologist vital to the world’s demise. Madeleine Stowe does a good job as a psychiatrist caught in an increasingly unbelievable situation. But it is Bruce Willis who impresses the most here – his grizzled, tough-guy act is well balanced against a genuinely shattered, empathetic interior. When he needs to convey sheer confusion, he does so with as much aplomb as he executes the fight scenes, where his character crosses into difficult territory. ‘Twelve Monkeys’ is a reminder that Bruce Willis’ talents go beyond being a bankable action hero.

Though Brad Pitt was Oscar-nominated for his performance as Jeffrey, and it is fascinating seeing him play such a different role, he does come across as Brad-Pitt-trying-his-best-to-be -crazy, rather than convincing beyond the artifice.

Another potential point of contention is the fact that for some, the zigzagging plot and sheer oddity of the material may be simply too much. Each new twist is exciting but there are probably a few too many to draw certain audiences in. This is understandable, however, I do think that ‘Twelve Monkeys’ ultimately succeeds because its climax is emotionally satisfying in spite of its many impenetrable elements. As well as this, it does seem to me that many of the details will be rewardingly ironed out by a rewatch.

If you have an appetite for a tale that reflects our current moment whilst offering a completely absurd reality, ‘12 Monkeys’ is for you.