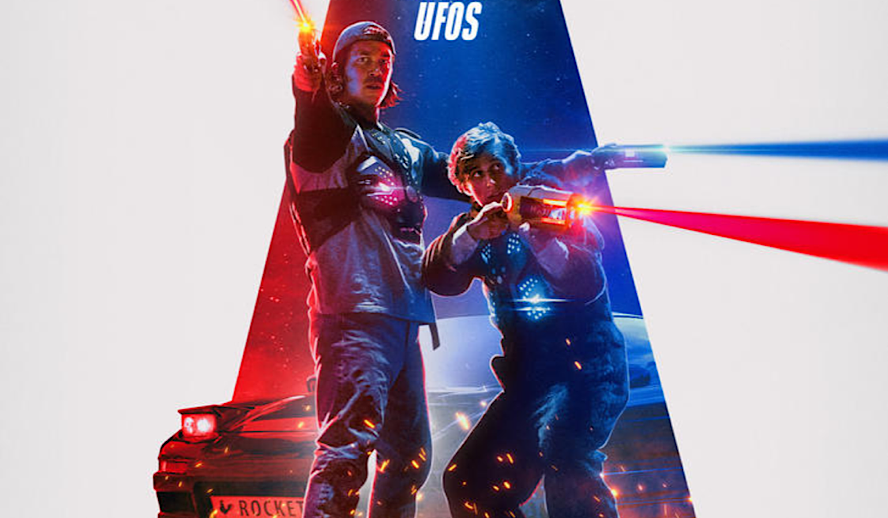 A few months ago, I reviewed a Norwegian film called ‘The Burning Sea’. Now it’s time for me to return to the country to review another much different film, one by the name of ‘Blasted: Gutta vs. Aliens’. While I know little about the production behind this film, or if it saw any kind of festival release prior to getting picked up by Netflix, I had my hopes up quite a bit after having seen the trailer and reading the premise. A pair of former laser tag champions teaming up to take on invading aliens sounded like just the kind of ridiculous set up that, if done right, could end up being super entertaining. On top of that, I love action, I love sci-fi, and I love movies that don’t take themselves entirely seriously, so already I had some pretty high expectations for this movie. Considering what I’ve titled this review above, I take it you already know if it met those expectations for me or not, but before we get into my thoughts themselves…

Directed by Martin Sofiedal and written by Emanuel Nordrum, ‘Blasted: Gutta vs. Aliens’ (listed simply as ‘Blasted’ on Netflix) is a science fiction comedy film about a man named Sebastian (Axel Bøyum) who brings his boss (André Sørum) to a bachelor’s party in the mountains in hopes of impressing him. During this time, Sebastian reunites with his old friend Mikkel (Fredrik Skogsrud), whom he used to play in laser tag tournaments with. However, a wrench is thrown in the works in the form of invading aliens who possess human hosts. After discovering a particular weakness of theirs, the friends must band together and take them on. The film touches on themes regarding friendship and not letting your professions consume who you are as a person.

It can be easy for films with insane premises to ultimately wind up being letdowns; sounding more interesting on paper than they actually are. However, I’m happy to report that ‘Blasted: Gutta vs. Aliens’ fully embraces its humorous logline and manages to be a very entertaining film from beginning to end. It’s got some surprisingly decent characters, a tone that balances tension and comedy pretty well, and a story that, while not all that deep, works really well. As you could probably imagine, this isn’t a movie that ever takes itself too seriously, but at the same time, it never goes for a 100% pure comedy approach. There are some moments of genuine tension, but the atmosphere of the film as a whole is focused more on the fun than anything serious.

Going back to the characters for a moment, they’re surprisingly realized and give ‘Blasted’ a sense of heart beneath all the alien-related shenanigans. Sebastian and Mikkel’s relationship is fully realized, and when things begin to get rough between the two of them, I was able to fully understand where both of their frustrations came from. But keeping in with the film’s tone, this conflict doesn’t get too sappy or melodramatic, and while it’d be easy to say that it comes across as forced, the way it’s written honestly worked given the context and overall tone of the film.

I fully admit that this is a “me” issue, but oftentimes I can be very picky when it comes to comedy. Even when it comes to shows and films that I like, it can be difficult for the humor to constantly hit that “just right” mark for me. But that being said, the comedic side of ‘Blasted’ really helps give it the level of personality that it has. Even if the jokes didn’t all make me laugh out loud, their presence works in the film’s favor, establishing the mood and keeping things lively. And that’s not to say I didn’t laugh at all when watching this film, on the contrary, there are a decent amount of jokes that were indeed pretty funny. Even something simple like two characters accidentally running into each other when leaping into action was timed just right and made me smile.

‘Blasted’ is directed fairly well. While the cinematography isn’t breathtaking, it does its job pretty well, using close-up and wide shots when they’re appropriate, as well as having handheld shots during scenes with tension in them. Some of the visuals related to the aliens are also pretty cool looking, whether it be specific locations or the zombified look of the humans they possess. There’s attention to detail in the color palette as well, with more down to Earth coloring used for most of the film, while many scenes related to the aliens take on a dark blue-ish look.

A Score to Settle

One thing that I couldn’t help but notice is that, score-wise, this is a very musical film…no, it’s not a musical, but almost every scene has music playing at some point or another. While it didn’t bother me too much personally, this is something I could imagine bugging those who are fairly observant when watching movies. It does admittedly come across as forcing certain moods at times, like a comedic scene will have humorous music in the background, and a scene that’s meant to be emotional might make use of a sad piano. Music is a powerful tool and can make or break a film, and while the score in this film could have been dialed back just a bit, it still does its job just fine.

If you like “fun” movies, ‘Blasted: Gutta vs. Aliens’ is definitely for you. It’s not cerebral, and it won’t challenge your perception of reality or anything like that…and I wouldn’t have it any other way. It’s a film that successfully pulls off the “dumb fun” angle, with enough action, suspense, and fun character interactions to keep my attention for the entire two-hour runtime. And don’t let the TV-MA rating scare you away; while the film has quite a lot of swearing that justifies it, there’s no gore, or really anything gruesome at all (unless you count a brief moment of very mild bloodshed after one character’s hand gets bit); those who are squeamish have nothing to worry about. ‘Blasted: Gutta vs. Aliens’ is an excellent sci-fi comedy that knows when to be funny, when to be menacing, and when to be badass. Truth be told, I’d feel safe in considering this one of my favorite movies of the year so far, and it’s a movie that I think just about anybody could enjoy. Netflix might not be doing so well right now, but if you’re one of the people that hasn’t canceled their subscription yet, ‘Blasted’ is certainly worth the watch.