‘Choose or Die’: The Netflix Original Horror Film is Kind of Underwhelming 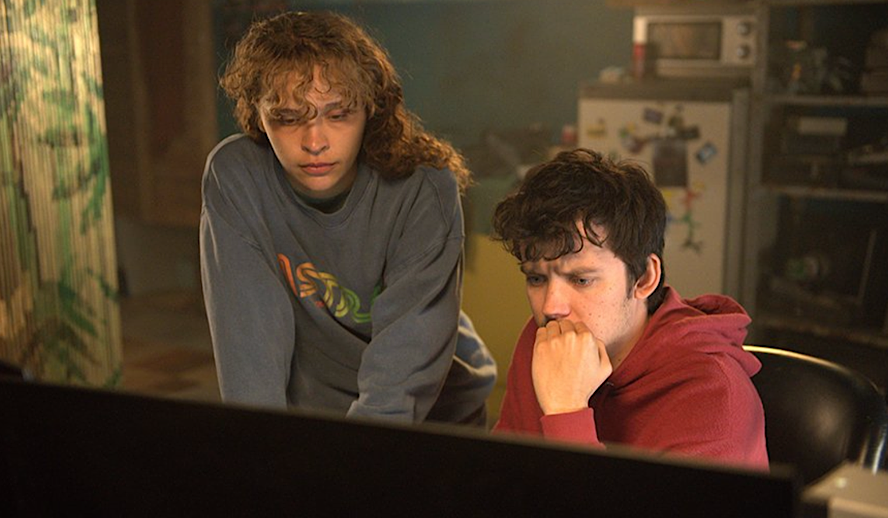 When it comes to horror films, there are a lot of factors that must be balanced in order to create an end product that’s satisfying for its potential audience. On top of the engaging story and likable characters vital to any movie’s success, a proper unsettling atmosphere must be established without being forced. Real horror doesn’t come merely from jumpscares or extreme violence, it comes from suspense, high stakes, and characters the audience cares about trying to escape nightmarish situations. This is something that classic horror films like ‘Child’s Play’ and ‘A Nightmare on Elm Street’ nailed.

In a post-‘Saw’ world, however, a common complaint regarding many modern horror movies is that they rely more on shock and gore than actual tension. It was for this reason that the trailer for the latest Netflix horror film, ‘Choose or Die’, concerned me a bit. Some of the moments teased in the trailer made the film look like it was leaning more towards a “make-the-viewers-feel-sick” angle rather than a proper sense of fear or dread. But does the actual film confirm those concerns of mine? Is this movie little more than shock value for the sake of shock value?

Helmed by first-time director Toby Meakins, ‘Choose or Die’ is a British horror-thriller film about a financially-struggling college student named Kayla (Iola Evans). She lives in an apartment building with her drug-addicted mother (Angela Griffin), who’s not only broken over the death of her son, but taken advantage of by the apartment’s abusive landlord. While learning to code from her friend Isaac (Asa Butterfield), she discovers a mysterious text-based interactive fiction game called CURS>R that offers a large amount of money to whoever can complete it. However, it turns out this isn’t any ordinary game, and it holds a power that puts her and anyone close to her in great danger.

The Highs and Lows of ‘Choose or Die’

Right off the bat, I’m glad to report that this is not a movie that’s over-reliant on nasty imagery in order to be creepy. Yes, there are a few scenes where the violence gets rather unpleasant, but those scenes are far and few between, and most of the horror here is established properly through atmospheric tension. There were a few scenes that actually were pretty suspenseful all things considered, and none of these scenes even featured any on-screen violence at all. There is an earnest attempt at making a creepy, suspenseful movie here, and I appreciate that. The acting is also pretty good, with the cast faking American accents so well I never even realized they were British until I looked it up later. Additionally, the musical score, composed by Liam Howlett of The Prodigy is fairly decent. It utilizes a lot of ominous retro-sounding electronic noises that fit perfectly, considering the subject matter of the film revolves around an old computer game.

However, despite ‘Choose or Die’ doing a good number of things right, I personally felt the movie fell short in a number of areas. While the direction was solid, most of the movie’s problems lie in the script; for starters, there’s a decent amount of less-than-stellar dialogue that just doesn’t feel natural. In particular, there are quite a few f-bombs dropped throughout the film, and oftentimes when the word is spoken, it sounds fairly forced. It’s no secret that in real life, some people have a tendency to swear left and right, but when it comes to movie dialogue, excessive swearing runs the risk of sounding unnaturally implemented, depending on how well the dialogue is written. Language aside, I personally felt that the biggest drawback of this film was the small scale.

The conflict in ‘Choose or Die’ feels like it’s building up to something grand and exciting, but without spoiling anything, the end result comes off as more anticlimactic than anything. The stakes are there, and they’re gradually raised throughout the film, but by the end of it, Kayla’s journey comes off as surprisingly small. There have been mid-budget movies that have benefited from smaller-scale stories, and films that would have benefitted from shorter runtimes, but in the case of ‘Choose or Die’, a slightly longer runtime in conjunction with a larger scale of the story could’ve made it a lot more engaging. As is, it feels more like an extended episode of a TV show than a proper movie.

Prior to the release of ‘Choose or Die’, one piece of trivia that stood out was the fact that the film featured Robert Englund, the actor famous for playing the iconic Freddy Krueger in the ‘A Nightmare on Elm Street’ films. Enough attention was drawn to the casting choice to make one believe that he played a large role in the movie, perhaps the villain. However, in the actual movie, Robert Englund’s role is merely a meta voice-only cameo. In what feels more like fanservice than anything, Englund plays a fictional version of himself, who is only briefly heard in a pre-recorded message over the phone introducing CURS>R players to the game.

While there’s a lot of attention brought to the fact that this is Robert Englund, with Isaac becoming super excited upon hearing his voice on the message, it doesn’t really add anything as far as the rest of the film goes. While this wasn’t any sort of problem for me – a cameo is just that: a cameo, after all – it’s worth pointing out for anyone who might’ve been interested in this film simply because Englund’s name is attached to it.

When all is said and done, ‘Choose or Die’ has a decent handful of things going for it, such as the acting, the surprisingly effective tone, and some of the special effects, but even so, the film as a whole unfortunately came across as flat and underwhelming. As far as recommendations go, this is one I feel is fairly skippable for most. However, if you’re someone like me who enjoys browsing through lower-budget independent movies on streaming services and/or you’re a horror junkie, then there’s nothing stopping you from checking this movie out for yourself. If you want to settle down one night and check out something mildly spooky, this isn’t a bad choice, even if there are better films out there even in that regard. I’m not a die-hard horror fanatic, so I can’t speak on behalf of those who are, so if this movie sounds at all interesting to you, I’d say at the very least give it a chance.