‘Chip ‘n Dale: Rescue Rangers’ Might be One of Disney’s Strangest Films to Date 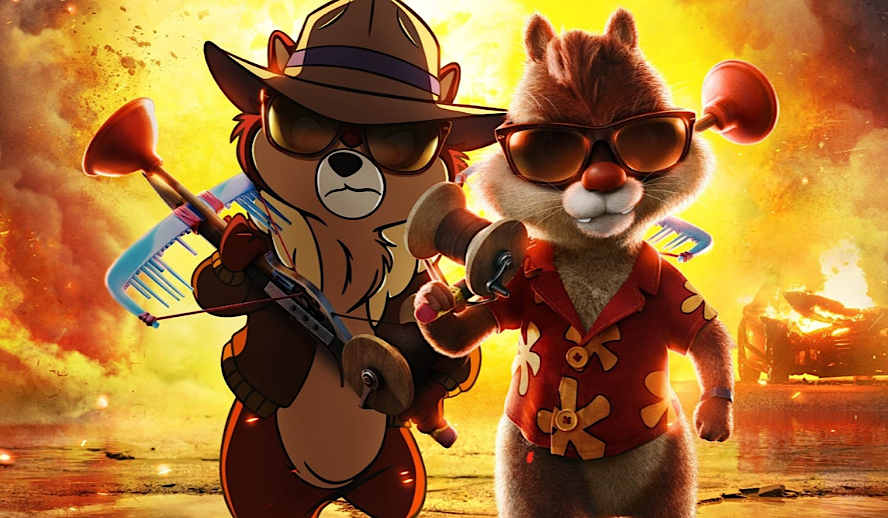 From Saturday Morning Fare to Satire

‘Chip ‘n Dale: Rescue Rangers’ was a show that I have very foggy memories of watching a few times when I was very young. Based on Disney’s classic chipmunk duo Chip and Dale, the show featured a reimagining of the two as being part of a detective agency alongside a few new characters. Together, they would go about, solving criminal cases and helping out both fellow animals and humans. Being part of the Disney Afternoon Block of the 90s, the series was fairly popular and is well-remembered by people who grew up with it to this day. In 2014, filmmaker Robert Rugan pitched a live-action/animated hybrid film based on the show that apparently would’ve served as an origin story detailing how the titular Rescue Rangers came to be. Despite being greenlit, details on this adaptation went quiet for a number of years, until it resurfaced…in a much different manner.

Instead of being a direct adaptation of the original Saturday morning cartoon, ‘Chip ‘n Dale: Rescue Rangers’ takes a far more meta approach to its source material; this film takes place in the same type of universe that ‘Who Framed Roger Rabbit’ did, where animated characters coexist with regular humans, and the original ‘Rescue Rangers’ series exists as an in-universe show that Chip and Dale starred in. The film’s story is set in the present day, long after the cast drifted apart. Chip (John Mulaney) and Dale (Andy Samberg) must reunite and put their differences aside to take on a kidnapping case that not only involves another of their old friends but turns out to be bigger than they could ever imagine.

When the trailers for ‘Chip ‘n Dale: Rescue Rangers’ came out earlier this year, I was admittedly highly intrigued. The satirical, self-aware edge alongside the updated Roger Rabbit-type setting made for an incredibly bizarre-looking film, especially for a family picture made by Disney. After having now seen it myself…yeah, this film’s kind of a trip. From the countless cameos that are guaranteed to throw at least some unsuspecting viewers for one heck of a loop, to the style of comedy that feels like it would be more at home in a film from just about any company other than Disney, this is certainly one of the more attention-grabbing family films of the year. And yet…the film manages to work surprisingly well, given the less-than-stellar reputation of films that feature abundant amounts of cameos from different IPs.

The adventure that the titular duo go on is never dull, with the both of them constantly visiting different locations and getting into all sorts of predicaments. And for a direct-to-streaming film, it looks pretty nice overall, with countless different cartoon (and in some cases, puppet) characters rendered in different mediums seamlessly blending into the environment. The humor also landed a bit more than I thought it might, with a couple of moments that were so over the top they had me grinning like an idiot for moments straight.

Despite the fun to be had, ‘Rescue Rangers’ isn’t a perfect movie. For all the moments of humor that landed, there were some that just came off as tryhard, such as a scene of Chip walking through Hollywood, looking at various parodic movie posters, including “Fast & Furious Babies” and “Batman vs. E.T.” Additionally, there are a number of moments that go for a more “serious and emotional” vibe that doesn’t work nearly as well as they’re intended to, thanks in part to the ridiculous nature of the film. I can’t really say with honesty that I was at all invested in the falling out between Chip and Dale. However, there’s one other off-putting aspect of the film that I feel warrants discussion in greater detail.

An Elephant in the Room

While this was a point of controversy even before the film came out, there is one plot point in ‘Chip ‘n Dale: Rescue Rangers’ that left a fairly bad taste in my mouth. Disney’s rendition of Peter Pan, played by Will Arnett, is a major antagonist (which isn’t a spoiler, he’s introduced early on in the narrative). The reason why so many people were put off by this after seeing it in the trailers was not that a classic Disney protagonist was reimagined as a villain, but rather because Disney’s Peter Pan in particular taking on this role reminded them of what happened to the actor that played him in the original film. The actor in question, Bobby Driscoll, was let go by Disney, in part due to his acne requiring makeup to cover. In the years following, he lived a fairly rough life; he had trouble finding acting gigs, he was made fun of for his acting career, and he became a drug addict, finally dying at the age of 31 due to an overdose.

In the actual film, Peter (who goes by the name Sweet Pete) details his own falling from grace in a manner that was clearly meant to mirror that of Driscoll’s. While it’s entirely possible this parallel was meant to be some sort of shot towards past Disney for treating Bobby Driscoll as poorly as they did, it comes across as being in rather poor taste, especially considering that this movie was also made by Disney. There are some lines better left uncrossed, and a family-friendly comedy film referencing the tragic early death of a troubled former child star feels wholly inappropriate.

Is ‘Rescue Rangers’ Worth the Watch?

‘Chip ‘n Dale: Rescue Rangers’ is a movie that’s sure to be polarizing for a lot of people for a number of reasons. The fact that it’s a quasi-‘Who Framed Roger Rabbit?’ spinoff rather than a straight adaptation of the show it’s based on may be disappointing to fans, and it is another in a growing line of films that revolve heavily around meta, self-referential stories may also turn a good number of people off. Therefore, I think it’s important to understand just what kind of movie this is in order for me to properly recommend it. Overall, however, I liked it more than I didn’t. Aside from the issue detailed above, there’s a clear amount of passion that went into this film that paid off quite well. Director Akiva Schaffer intended to make a movie that served as a celebration of animation as a medium and not just Disney animation, an intention that allowed the cameos to work and not just feel like meaningless fanservice. This movie’s no ‘Roger Rabbit’, but it does its job well enough that I’m glad I finally got to experience it after weeks of growing curiosity. If you’re into movies that aren’t afraid to get a little crazy, and you’ve got a Disney+ subscription, ‘Chip ‘n Dale: Rescue Rangers’ is definitely worth giving a chance.