Revisiting ‘Little Shop of Horrors’: A Spooky Musical for Everyone 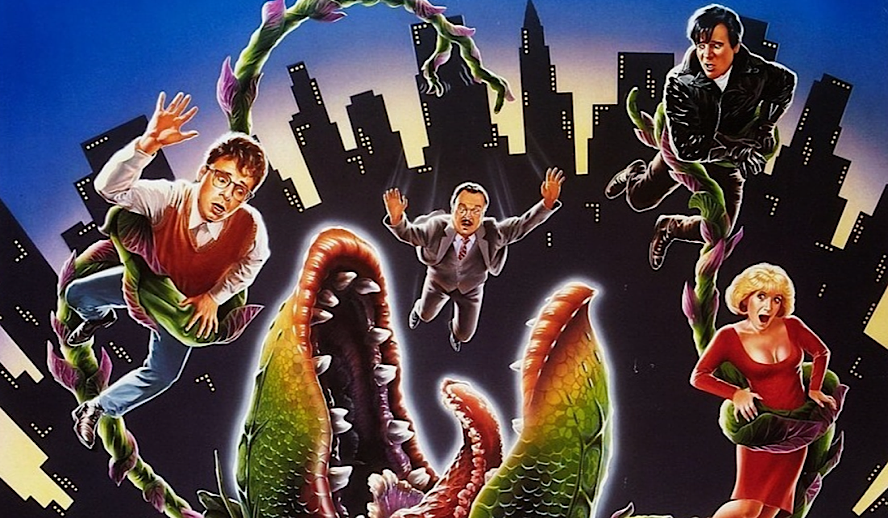 ‘Little Shop of Horrors’ is a 1986 film which is adapted from the 1982 Off-Broadway musical which is a remake of the 1960 B-Movie of the same name. Did you get all that? It will be on the test. Why don’t we start from the beginning? In 1960, at the height of giant monster movies, ‘the Little Shop of Horrors’ came out, directed by the “Pope of Pop Cinema” himself, Roger Corman. The film was a dark comedy and became a semi cult classic due to its farcical humor. Now, let’s fast forward to 1982 where Alan Menken and Howard Ashman, the minds behind many Disney renaissance films like ‘Beauty and the Beast’, came out with the musical ‘Little Shop of Horrors’.

The musical premiered off-Broadway and was a comical take on the B-List cult classic. The musical became such a success that it was soon adapted for film by Frank Oz, the puppeteer behind Miss Piggy and Fozzie Bear. The film, with Oz’s direction, has since become a cult classic thanks to its fun songs, engaging story, and twisted humor.

‘Little Shop of Horrors’: What’s a Musical Without Good Music?

‘Little Shop of Horrors’ is a musical for those who aren’t really fans of musicals. The music in ‘Little Shop of Horrors’ doesn’t sound like the typical Broadway musical music but instead is in the tune of Jukebox hits that one would hear in a greasy diner. Take the musical’s Greek Chorus, Crystal (Tichina Arnold), Ronette (Michelle Weeks), and Chiffon (Tisha Campbell) as a clear example. The trio, who narrate the film, are made to look like a Motown singing group in the same vein as ‘the Supremes’. While they are made to look like ‘the Supremes’, their pipes also match as seen with the film’s prologue song. The intro song, instead of being a traditional musical tune, is a doo-wop song that anyone can rock out to.

The film also creatively utilizes the city setting for the music. In one of the film’s best songs, ‘Skid Row (Downtown)’, the city itself acts as a chorus to the song. Each citizen has a verse in the song and instead of auto-tuning their voices, the film instead focuses on the diversity and uniqueness of each individual voice. This makes the song sound even better since each unique voice offers a different perspective and even sound (I mean, the guy at the two-minute and thirty-second mark, wow). The song also uses the sounds of the city to create rhythm and beat. From the stomps of people walking to work to the sweeps of the broom, these familiar noises are used to create both an urban mood and add a rhythm to the song.

While the songs are fun and creatively use an urban setting, they also advance the story further. With their work on Disney films, Alan Menken and Howard Ashman have truly popularized the “I Want” song. The “I Want” song is a type of musical song where the character belts out about their hopes and dreams, what they are chasing after in the story. This is a great tactic to use music as a way of expressing the inner workings of a character while using music to advance the story. ‘Little Shop of Horrors’ has this with Audrey (Ellen Greene), the love interest who wants to make a better life for herself. Her song, “Somewhere That’s Green”, follows Audrey as she laments about her abusive relationship and longs for a life in the white picket fence suburbs.

While the song playfully pokes fun at the tropes of being a fifties housewife, it also shows that all Audrey longs for is a happy and simple life. The song gives us a deeper look at her wants and desires, thus it also makes her a more interesting character. The musical achieves what every musical sets out to do, which is to tell its story and excite the audience through fun tunes.

A Twisted Sense of Humor

‘Little Shop of Horrors’ is fondly remembered for its twisted sense of humor. This dark humor comes from many aspects of the plot, such as the sadistic dentist that Audrey dates, Orin (Steve Martin), to Audrey II (Levi Stubbs), the plant that eats people. Orin is perhaps one of the funniest parts of the movie, being a fifties-style greaser who is also a dentist. The film argues, through the song “Dentist!”, that Orin was meant to be a dentist since he is a sadist who “gets off on the pain’ that he causes. In another funny scene of the film that plays with expectations, Orin gets a patient (Bill Murray) who loves pain just as much as Orin loves causing pain. The patient is turned on by the pain Orin causes and since this means that Orin isn’t causing any real misery, Orin grows more and more frustrated. Pairing a sadist with a masochist is an idea guaranteed for some dark humor and ‘Little Shop of Horrors’ takes full advantage of that setup.

The film’s humor also comes with it playing into horror film tropes (the film is based on a B-rated horror movie after all). This can be seen with the musical number that describes the birth of Audrey II, where Seymore (Rick Moranis) doesn’t think anything of the total eclipse of the sun or the green rays that come with it. This playful blend of horror and humor is especially seen with Audrey II, the film’s delightful villain who enjoys eating the evil people in Seymore’s life. Audrey II isn’t just a monster but is a sassy soul singer who takes pleasure in the misery of others.

The film’s climax, ‘Mean Green Mother From Outer Space’, plays with the tropes associated with monster movies by having Seymore say that “your kind never wins” referring to how the monster never wins in these stories. This dark humor is pushed even further with the film’s original ending that was cut for being too dark, where Audrey II takes over the world. This sequence is a hilarious homage to giant monster movies and acts as a middle finger to traditional happy endings. While it is a shame that we didn’t get this ending, the film’s theatrical ending still has a hint of dark humor in it, with the reveal of another Audrey plant.

‘Little Shop of Horrors’ is a fun movie for all audiences thanks to its catchy doo-wop tunes and use of dark humor. It is the perfect film for this time of year, spooky since it plays homage to the radiation monster movies of the nineteen fifties and fun since it has a campy style of humor that made similar films cult classics. You don’t need to be a fan of musicals to find enjoyment out of ‘Little Shop of Horrors’, from its romance to its fun story, there is something in the film for everyone. It was announced in January 2020 that a remake of the film was in the works with Taron Egerton and Scarlett Johansson set to star. If the film keeps the same humor and music that made the original a cult classic, then hopefully the film will be just as successful.

‘Little Shop of Horrors’ is available to stream on Hulu.