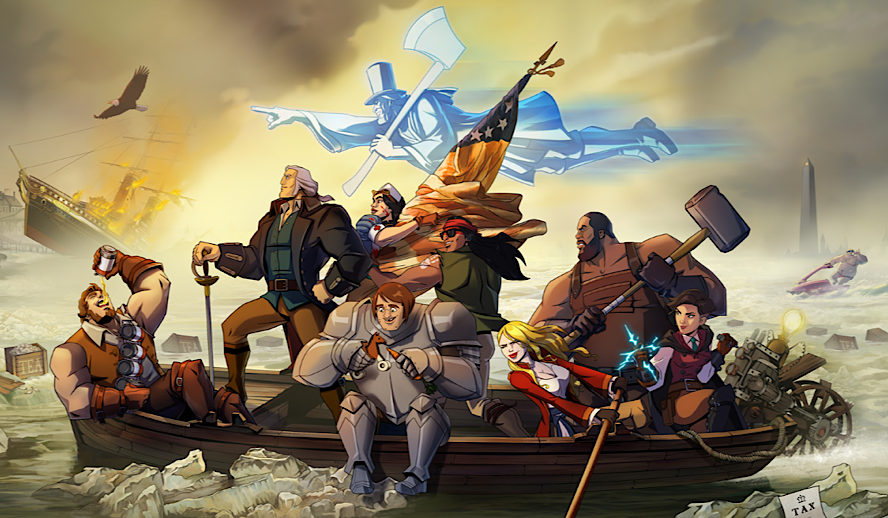 Home of The Brave

New to Netflix this week from director Matt Thompson, producer of the hit animated series ‘Archer’, comes ‘America: The Motion Picture’, an animated comedy/political satire on, what else but, the founding of the United States of America. The film follows a chainsaw-wielding George Washington as he assembles a team of exaggerated historical figures to take down the tyrannical King James in this very historically inaccurate take on the American Revolution. The film pairs an A-list cast including the talents of Channing Tatum and Olivia Munn with expert filmmakers such as Phil Lord and Chris Miller, producers of ‘Spider-Man: Into the Spider-Verse’.

This is an absolutely absurd film, which is both a compliment and a criticism. Oddly enough, the strengths of the film are also the most apparent weaknesses. The film has trouble finding a sweet spot in what is so on-the-nose that it works and so on-the-nose that it doesn’t. While I myself enjoyed the film in the end for its commitment to being the craziest film possible, I can easily see how others will check out quickly. While not everyone’s cup of tea, the film has a lot to offer in intelligent political commentary and chuckles despite never kicking into the third-gear of belly laughs.

‘America: The Motion Picture’ – What Worked – The Performances

There is a lot to like in ‘America: The Motion Picture’ starting with the fantastic voice acting cast. Channing Tatum, of ‘21 Jump Street’ fame, is incredibly funny as George Washington and I found myself becoming incredibly engaged in the character’s lovable dopey-twist on our first president. Another standout is Olivia Munn, who portrayed Psylocke in ‘X-Men: Apocalypse’, playing a female version of Thomas Edison. Her performance was spot on for the intelligent female heroine the film portrays and was another alteration to a historical figure that I found very engaging. The character uses her scientific knowledge as her weapon of choice which led to some very visually exciting animated moments.

Andy Samberg, of ‘Popstar: Never Stop Never Stopping’, portrays the antagonist of the film, Benedict Arnold, and may just be the most transformational performance of the bunch. Samberg’s voice portrayal is so cartoonishly evil that I barely recognized it from ‘The Lonely Island’ star. Some other great performances came from Judy Greer as Martha Washington, Jason Mantzoukas as a beer-chugging Samuel Adams, Bobby Moynihan as a socially awkward Paul Revere, Raoul Max Trujillo as Geronimo, and Simon Pegg as King James. Each character was allowed the chance to individually shine and allowed for the performances of each actor to elevate the overall scenes they appear in.

What Worked – The Craft

The animation of the film is pretty impressive as well, especially some of the action sequences in the first and third acts of the film. 2D animation has been mostly phased out from feature films since Disney’s last push with ‘The Princess and the Frog’ and has been replaced with the new-age 3D animation style Pixar coined. Since then, 2D animation has been relegated to television shows such as ‘Rick and Morty’ and the aforementioned ‘Archer’. So, to see a feature-length 2D animated film was a nice change of pace and one I felt really worked in the case of this film. While I am unsure of how much the two were involved in the making of the film, the influences of Phil Lord and Chris Miller are prevalent in this film. Lord and Miller have made a name for themselves for their tongue-in-cheek humor and self-aware films such as ‘22 Jump Street’, ‘The Lego Movie’, and the previously mentioned ‘Spider-Man: Into the Spider-Verse’.

‘America: The Motion Picture’ takes that self-aware style and runs with it which for the most part works well. When the film is at its best is when it implements its tongue-in-cheek style to America’s history. The film sets itself up to explore some of America’s faults and shortcomings in a satirical way that felt very authentic and earned in the film and provided some of the bigger laughs of the film. There are references to major events such as the Vietnam War that while not technically in the timeline of the American Revolution, are touched on in an intelligent way — another potent aspect of the film was its discourse on the treatment of Native Americans. For such a ridiculous and dumb film, it was nice to see the film encouraging its audience to think critically about certain issues. Another plus of the film is the use of its TV-MA rating; the filmmakers hold nothing back and let the violence and the gore run wild which was very entertaining.

While overall, the tongue-in-cheek elements of the film work it is not a one-hundred percent hit rate. The film tries to make its characters make references to modern-day pop culture which often did not work for me. It felt at times like the filmmakers were trying too hard and taking too full advantage of the meta nature of the film. Focusing the jokes more on the world that the film built would have made for a smoother watch. An example of how the film becomes too meta is the bountiful amount of ‘Star Wars’ references in the film. After the first few, it becomes a little overbearing so reining that in could have aided the film as a whole. The film’s most enjoyable aspect is its style, however at points, it becomes a problem — luckily, the good mostly outweighed the bad. The film is filled with chuckles but never crosses that line into absolute hilarity which is unfortunate because it certainly had the potential to.

‘America: The Motion Picture’ is an absolutely ridiculous film that while presenting itself as dumb humor, has an intelligent core behind it. The film divulges quickly into absurdity and if that is not for you, I wouldn’t waste your time. The great thing about this film is that just by reading the logline audiences will know if they will enjoy this film. If a chainsaw-wielding George Washington made you chuckle, give the film a watch; there is plenty to enjoy from what the film has to offer. If you roll your eyes at a frat boy take on Samuel Adams, then maybe take a rain check on this film. As for me, I fall into the category of the former and enjoyed the film for what it was.

Stream ‘America: The Motion Picture’ on Netflix today. Keep an eye out for Channing Tatum’s next project ‘Dog’ with Jane Adams that will release in 2022.