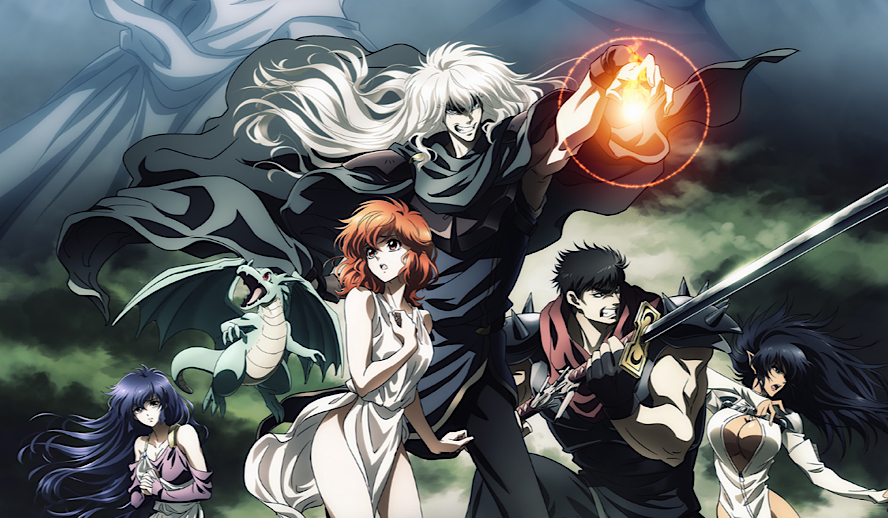 The New Anime on the Block (with an Old Soul)

Given that Netflix is either incapable of or not invested enough to market the overwhelming majority of its content, new shows don’t so much premiere but plop into the unsuspecting viewer’s lap. This is not always a bad thing. Even with zero buildup, a new anime program on Netflix is unlikely to fly under everyone’s radar, given the service’s long and loving relationship with the medium, along with a pretty solid track record. Enter ‘Bastard!! -Heavy Metal, Dark Fantasy-’, a fairly notable Netflix “original” anime whose first season premiered just in time for the July 4th weekend. Based on a manga of the same name which premiered in 1988, ‘Bastard!!’ comes from a different era — the same period of anime and manga that gave us ‘JoJo’s Bizarre Adventure’, and the shared ancestry is unmistakable; for better or worse, this show’s sensibilities are rather old-fashioned.

Allow me to put on my movie trailer voice. In a world where magic is the order of the day, the kingdom of Metallicana (yeah) is threatened by a vast army of wizards, warriors, and ghouls. A high priest of the kingdom, as a last defense measure, reawakens a powerful wizard whose soul had been sealed away in the body of a young boy: Lucien, the high priest’s adopted son. There are two catches: first, the great and rascally wizard can only be awakened with a virgin’s kiss (oh yeah), and secondly, the high priest’s biological daughter, Yoko, is the first in line to do such a thing. Upon the kiss, Lucien transforms into Dark Schneider, the most powerful wizard in the land — and formerly a close ally of the villains.

This shouldn’t come as a surprise, but a bad guy who is finally once again given flesh may not be too eager to help out the people who had him imprisoned in the first place; it’s a good thing, then, that Dark Schneider has a huge weakness for women who are nice to him. Also quite conveniently, every woman who crosses paths with Dark Schneider (that’s still his name, yeah) is unable to resist his wiley charms, and if this all sounds like dumb wish fulfillment reminiscent of ‘Conan the Barbarian’, that’s the name of the game.

‘Bastard!!’ – A Surprisingly Tasteful Exercise in Blood and Boobs

‘Bastard!!’ doesn’t just wear its influences on its sleeve, but from head to toe; also like ‘JoJo’s Bizarre Adventure’, this is a show that loves to name characters after bands the author likes. In the case of ‘Bastard!!’, manga author Kazushi Hagiwara clearly loves heavy metal from the ‘80s (for example, the big bad, Anthrasax, is named after Anthrax), and this informs both the show’s aesthetic and its casual attitude toward transgressive content.

This is not what I would call a show for the faint of heart, if only because of how violent it is — and perhaps even more importantly, how campy it is. While you may go into ‘Bastard!!’ expecting something mentally draining like ‘Devilman: Crybaby’ (to this day the darkest and goriest anime to hit Netflix), ‘Bastard!!’ is considerably lighter in tone — almost an outright comedy. I would argue that not only is the show’s campiness a plus, but it makes the whole thing an experience worth recommending to those who are skeptical.

Now, I think it’s only fair to point out that ‘Bastard!!’ is shamelessly and persistently horny. Not only does Dark Schneider’s transformation hinge on a virgin’s kiss, but the man himself is a big ball of hormones; the real kicker is that while it is something of an action-comedy, this show also involves a harem. Anime veterans won’t be surprised by such a development, but the uninitiated may be taken aback by (for instance) the fact that Dark Schneider seduces several female warriors while also fighting them. As such, I should say here as a sort of content warning (although Netflix itself overstates the matter somewhat on the show’s page) that there is a good helping of nudity, and not all of it under consensual circumstances — although the nonconsensual fanservice is pretty mild compared to some other anime I can think of. If I do have a nitpick about the show’s liberal use of nudity (this will sound weird, but hear me out), it’s that it might not actually go hard enough with the fanservice. For a show as shameless and over-the-top as ‘Bastard!!’, the moments where it holds back on nudity strike me as conspicuous; even for as naked as Dark Schneider often is (and he’s far from unattractive), the show goes to absurd lengths to make sure we never get a look at his package.

The violence, on the other hand, is delightfully unhinged, and it’s all in good fun. Tonally, ‘Bastard!!’ has more in common with a Saturday morning cartoon than a Very Serious examination of the human condition, but if Saturday morning cartoons were made for people with a taste for blood. Dozens of expendable mooks get torn to shreds, chopped up, decapitated, and so on, with the destructive glee of a particularly rascally five-year-old who’s going through a sugar high. Indeed, ‘Bastard!!’ lives and dies on how much fun it has with its own spectacle, between the rampant fanservice and the mountains of gore; it doesn’t hurt, of course, that violence against female characters is kept to a minimum (if you’re a male character, then it’s a flip of the coin on whether you’ll live or get turned to mince meat). It’s a show that never takes itself that seriously, with even the occasional breaking-the-fourth-wall moment referencing the fact that it’s based on a dumb action manga from the ‘80s.

For People Who Want Humor in Their Dark Fantasy

While the slush pile for Netflix’s live-action content is staggeringly huge, its anime lineup continues to be solid, despite the odds, and ‘Bastard!!’ makes for another fine addition. How much you get out of this show depends on how seriously you take it, and also how much you’re willing to indulge in its self-aware trashiness. As a resident trash baby, though, I don’t find it to be a hard sell; sure, there are better anime you can watch on the platform (‘Beastars’ comes immediately to mind), but sometimes you really feel like gorging yourself on candy like it’s Halloween.

Liden Films had their work cut out for them when they decided to give a classic manga a new animated adaptation, and while they may not be the best ones to ever do it (their resume is a mixed one), they did an admirable job with giving anime fans something that doesn’t pander to current industry trends so much. Even if you’re not already into anime, the show’s visual style, choice of music, and references to classic metal acts will ensure a certain type of person will get something out of it.