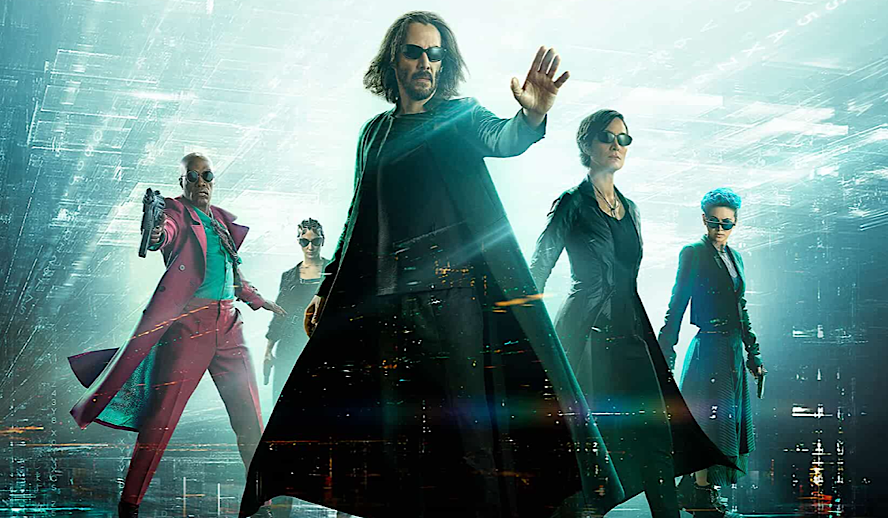 It’s been almost 20 years since the last ‘Matrix’ installment, but ‘Resurrections’ wastes no time reimmersing the audience into the sparkling, rain-soaked action sequences typical of the simulation-transcending franchise. Through a brief introduction, we’re treated to an alternative perspective, one that starts with Morpheus instead of Neo. Bugs (played by Jessica Henwick) finds Morpheus, played by Yahya Abdul-Mateen II (no literally, he plays a program created by Anderson that basically embodies Morpheus), who is revamped and utterly-self aware in the context of their new reality, once again asking Thomas Anderson, or Neo, to face the truth of the Matrix.

Longtime fans are reintroduced to Thomas Anderson as the acclaimed game designer of Deus Machina, played faithfully by Keanu Reeves. In his current reality, he and Agent Smith (Jonathan Groff) are business partners, and here, Anderson crafted the groundbreaking ‘Matrix’ game trilogy, inspired by the fantastical, past-life content of his dreams that allow him to faintly revisit these repressed memories. Whilst Anderson saves face with a prescription of blue pills, the threads of reality threaten to fray around him as the nuggets of his past seem to soak into his new simulation.

“That’s the thing about stories, they never really end, do they?”

Anderson is most notably mesmerized by his passing encounters with Trinity, reprised by Carrie-Anne Moss, who is similarly integrated into the fabric of the new reality as a typical middle-aged mother, Tiffany. Abdul-Mateen II finds a way to be charismatic following the indelible legacy of Laurence Fishburne as Morpheus. Jessica Henwick is the least forgettable supporting good-guy character, and I thought she was charming enough for the purpose of initiating the story.

Neil Patrick Harris plays his therapist who monitors the state of Neo in the restrictive, constructed reality that he endeavors to escape. He delivers his brand of stoic, understanding, passive antagonism that makes him feel suspicious from the beginning and culminates in some of my favorite lines in the film, including: “did you know that hope and despair are nearly identical in code?”

Groff is also delightfully evil, paying a delicate homage to the original Agent Smith. He clearly has a ball with the material, fulfilling the boundless wickedness of his character at every turn and proving to be an overall highlight. Jada Pinkett-Smith is aged and unrecognizable in reprising the role of Niobe. In a more comedic turn: Priyanka Chopra is ironically hilarious to me, appearing briefly at the beginning in an almost comical, second-long shot buried within a mundane expositional montage. She proves useful, but this was a little too ‘subtle’ for my tastes, though it did make me laugh.

‘The Matrix Resurrections’ – The Philosophy of the Rebooted, Retread, Regurgitated

It also manages to do what this franchise does best, and what I was afraid would be lost on this two-decades-late installment: it says something that is not only innovative but deeply personal within the lens of the ever-evolving metaphor of Matrix technology. The Matrix degrades what is raw and real, morphing that which is special into the empty, soulless recreation of the true experience.

Now, in the clarity of sequel-induced hindsight, the story of ‘The Matrix’ transcends and examines the experience of Neo, of ‘Thomas Anderson’, as an unending source of energy through the reflection of his pain after losing Trinity. This installment goes beyond, providing a glimmer of hope by the name of love. Love that ignores the stringent boundaries of a harsh, unforgiving reality and strains – as Neo and Trinity always have – for that final, world-saving romance. Though more could be done to explore the depths of their connection beyond the cluttered remnants of their adventures in previous films, the fragmentation of their story feels somehow fitting for the overarching metaphor.

As we, once again, are familiarized with the boundaries of our world, the film cuts between that which is real and that which is wonderfully, imperceptibly fake. This ‘Matrix’ is about more than the system, now, this one is concerned about the content. The visual methods of remembering components of the series are well-done and woven within the beats of Neo’s revamped journey towards discovery, with images of his green-tinged past chopping between the hazy, same-but-different recreations of his simulated present. It’s cerebral, visceral, blurred with the structured nonsense of memory, and it knows it. ‘Resurrections’ imagines a world that is conscious of its own story, even including a cheeky self-description of the ‘Matrix’ series itself with terms like “mind-porn, philosophy, cryptofascism, capitalist exploitation, and etc.”

Though this film releases in a saturated market of self-referential meta-Cinema, it is successful (for a blockbuster) in utilizing the ‘source material’ for creative good rather than just profitable evil; through the perspective of the ‘video game’, ‘Resurrections’ is able to reference the sanctity of the real-life ‘Matrix’ franchise in a way that feels critical and ritualistic, rather than exploitative.

While fans of the franchise should hopefully be satiated, for now, we can look forward to seeing these stars in a number of upcoming films. Keanu Reeves is set to voice in ‘DC League of Super Pets’ in 2022, and ‘John Wick: Chapter 4’ in 2023. Carrie-Anne Moss is set to star in the Mark Lambert Bristol directed ‘Chocolate Lizards’.