’The Mitchells vs the Machines’: Animation Where Technology Has Emotions of its Own and Takes Over the World 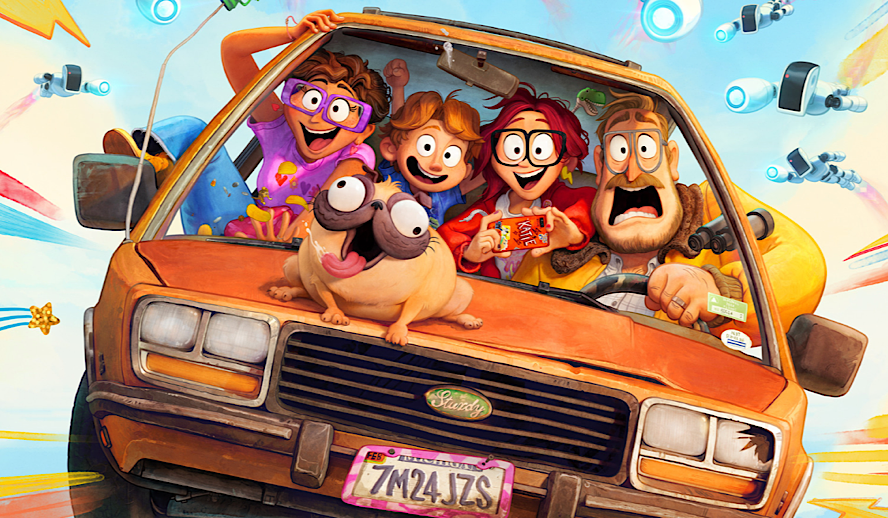 Photo: ‘The Mitchells Vs The Machines’/Netflix

Very Little Marketing for Such A Star-Studded Cast

I found this film while surfing the web for upcoming Netflix releases. I was intrigued when I first noticed that this was an animated film. Interesting. I then noticed it was an animated film, with a lot of big names attached to it. Even more interesting. Names such as Maya Rudolph, Danny Mcbride, John Legend, Chrissy Teigen, Eric Andre, and Fred Armisen in a film together would definitely generate a huge buzz…right? I would suspect that audiences who are fans of shows such as ‘The Eric Andre Show’, ‘Portlandia’, or ‘Big Mouth’ would totally flock to this film if it meant hearing their favorite comedic stars in action.

While ‘The Mitchells vs The Machines’ has already garnered a huge interest on Netflix since its April 30th debut, why it took until after its release to gain the popularity it deserves is confusing to me. In the near future it should receive the accolades it merits: however, one can only speculate how much bigger of an audience it would’ve reached if the marketing was done differently. When looking back in film history, when movies would be released in theatres, film studios would spend a substantial amount of time and money to help promote films with a star-studded cast.

Although ‘The Mitchells vs. The Machines’ was first released in select theatres on April 23rd, 2021, there was very little noise being generated in the months prior. Recently, since streaming services have become more popular in the film industry, the same effort films used to make in marketing has not been as prominent. Furthermore, the initial theatrical debut faced release and rescheduling issues due to the pandemic. Despite the various factors that worked against ‘The Mitchells vs. The Machines’ from receiving more marketing, the actors, producers, and animation teams talent helped turn this movie into a major success amongst audiences.  I wasn’t expecting to love this movie as much as I did. I can’t wait to tell you why it was such a special experience.

Because of the low exposure ‘The Mitchells vs. The Machines’ received prior to its release, most of my expectations of the movie were derived from the trailers. While the trailers made the movie appear attractive, it had made the movie appear to only be targeting a younger audience. However, after watching the movie, it became clear that there were aspects of the movie that were for all age groups. Mike Rianda uses the movie to address common problems within parent/child relationships and even social relationships. The film does an excellent job mirroring the dependency children have on their parents, to the dependency people have on technology. I also like how this film reimagines a world where technology has emotion.

I know I don’t only speak for myself when I say I love it when films deviate from common film tropes and stereotypes. I appreciate the message of, well, appreciation, that this film promotes. It teaches us to embrace our families, despite their flaws. The grass is not always greener on the other side, as depicted with the Mitchell’s neighbors, the Posey’s. I will also mention the unique animated approach the filmmakers took with this project. It is a perfect blend between, realism, computer animation, and comic-style linework. It is a film that is enjoyable for the eyes.

The Director, Mike Rianda, deviated from the norm when creating the animation for the film. Instead of opting for the highly popular CGI, Rianda chose to use hand-painted textures.  Rianda felt that the extra effort that came with not using CGI was worth the end result. To help with this process, Sony Pictures Animation, the studio behind the production, hired producers Phil Lord and Chris Miller. Sony recognized the pair’s work together in ‘The Lego Movie’ and ‘Spiderman: Into The Spider-Verse’ and felt that their expertise would be helpful in creating a movie with a similar animation style. All in all, the use of a star-studded cast, great writing, and producers with relevant work experience helped turn an under-exposed movie into a major success.

This film has been well received by many critics. Across all of the review sites I’ve seen discussing this film, I have yet to see anyone bash it or give any negative critique. That is extremely impressive and pretty rare, so you know this film is truly something special. I believe this film can be thoroughly enjoyed by both adults and children. It’s perfect for the whole family to watch. I would love for everyone to watch this film at least once. I promise you will not regret it. It is so realistic in the representations of a typical American family. It teaches you that you don’t need to be extraordinary or gifted to be a hero. You just need to be a human, and maybe just a little weird. With compassion, patience, forgiveness, and unconditional love, you have the ability to face anything in this world. You can even face an army of vengeful robots, plotting total world domination.

I first decided to watch this film all by myself, but shortly after, I realized I needed other people to experience it with. So I ended up watching this film with my immediate family, and honestly, that was the best decision I could have made. It made us laugh, it made us cry, and most important of all, it made us see each other. This film allows you to see the perspective of every party involved. I found myself genuinely starting to understand and sympathize with my dad more. In turn, I feel as though my dad actually started to understand me. We are very similar to the characters in the film for the reason that I have always been interested in a career within the entertainment industry, and he always fought with me to have a backup plan. I feel like this film brought us together in a way. I would absolutely watch this film again if the opportunity presented itself, and I encourage audiences to do the same.