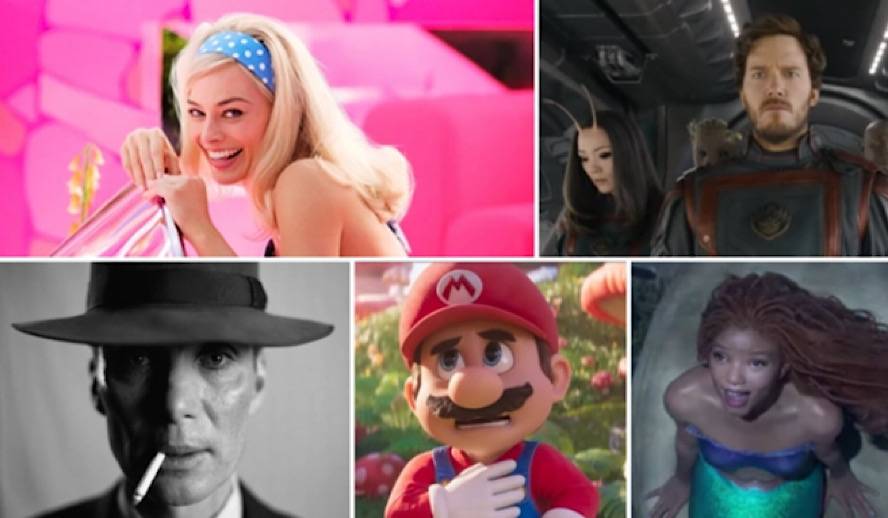 From Greta Gerwig and Noah Baumbach comes a nostalgic film that seems left field for the filmmakers. Alas, with stars like Margot Robbie and Ryan Gosling, the appeal has never been greater. Being Barbie is to be perfect in every way, unless you’re Ken, you may not get it. The film comes out on July 21st.

Already breaking news for Christopher Nolan, recreating the effects of a hydrogen bomb has placed ‘Oppenheimer’ at the forefront of movies that has people excited. Releasing on July 21st is ‘Oppenheimer.’ The story centers around J. Robert Oppenheimer during the years of development of the atomic bomb.

The best things come in three. Joining Channing Tatum in the third installment of the ‘Magic Mike’ series adds Salma Hayek to the cast. The last film in the series is Mike’s last shot at bringing his world into the view of others. “Magic Mike’s Last Dance’ comes out on February 10th.

‘Knock at the Cabin’

From the creative mind of M. Night Shyamalan is a new mystery thriller. The film centers around a gay couple that takes a holiday in a cabin when unexpectedly being confronted by an armed group of strangers that demand the family make a decision to avert the apocalypse. Dave Bautista has the potential to become a star with this film that comes out on February 3rd.

‘Little Mermaid’ continues the Disney Renaissance era of remaking its cartoons into live-action films. Coming out right before summer, on May 26th, this film will be a perfect movie to see to get audiences in the mood for warm weather and beaches. The story will mirror the 1989 version and is slated with another all-star cast. The talented Halle Bailey will embody the role of Ariel, while Melissa McCarthy, Javier Bardem, and Jonah Hauer-King also join.

From the writers and directors, Chris Buck and Jennifer Lee, of the mega-hit ‘Frozen’ comes Disney’s new animated film called Wish. Projected for later this year on November 22nd, we can meet Asha: a seventeen-year-old girl who, with the help of her goat Valentino, navigates Rosas, a kingdom where wishes are literally able to come true. Asha is voiced by Ariana DeBose with Alan Tudyk as the goat.

‘A Haunting in Venice’

Another whodunit film comes out later this fall on September 15th. This is Kenneth Branaugh’s follow-up to Belfast, and it is based on the Agatha Christie novel ‘Hallow’een.’ The crime mystery follows the retired Poirot, also played by Kenneth Branagh. Other cast members that have been proposed are Kelly Reilly, Michelle Yeoh, Jamie Dornan, and Tina Fey.

In theaters on December 15th comes another Willy Wonka tale. This time, the film will focus on Wonka in his early years when he was just meeting the Oompa Loompas and was begging to create his factory. Timotheé Chalamet is a young Wonka, with Olivia Coleman, Tracy Ifeachor, Rowan Atkinson, Keegan-Micahel Key, and Sally Hawkins to support.

This adaptation, based on the iconic Nintendo series of games, shows Mario and Luigi in their attempts to save Princess Peach’s Mushroom Kingdom from Bowser. Chris Pratt voices Mario, with Anya Taylor-Joy as Peach, Charlie Day as Luigi, and Jack Black as Bowser. The film is scheduled to release on April 28th.

With the recent upheaval of executives at Warner Bros and DC Studios, it is unclear how this year’s DC films will pan out, making them just as exciting to watch as ever before. Ezra Miller continues his role as ‘The Flash’ in this next installment to the DC superhero. Releasing on June 16th, the newest flash film feels like it has been forgotten about, but it is still set to release in mid-June. The plot is relatively under wraps but will center around Barry Allen as he comes to understand more of his powers. The film will have a multiverse plot of some sort where other Batmans are supposed to appear, such as Michael Keaton and Ben Affleck’s versions.

The next phase of the DC Universe will see its first Mexican protagonist. The story follows Jaime Reyes, the ‘Blue Beetle,’ a teenager who finds an alien beetle that gives him a superpower. Blue Beetle is played by Xolo Maridueña, with Harvey Guillén, Susan Sarandon, and George Lopez as the supporting cast. This will be DC’s second big summer release on August 18th.

From Universal Pictures, this is a different take on the creature feature. ‘Renfield’ is about Dracula’s henchman and inmate at the lunatic asylum as he tries to be released from being Dracula’s servant. Nicolas Cage plays Dracula and Nicholas Holt is Renfield in this comedic horror film releasing on April 14th.

Denis Villeneuve left audiences wanting more after the first installment of his adaptation of ‘Dune.’ ‘Dune 2’ will continue to follow Paul Atreides as he learns to live on the desert planet where spice is harvested. Timotheé Chalamet and Zendaya both return for Part Two, releasing on November 3rd.

‘Indiana Jones and the Dial of Destiny’

Indy returns in the newest Indiana Jones movie. Harrison Ford reprises his iconic role as Indiana Jones for one last time as he delves into one last adventure. Joining the cast is Phoebe Waller-Bridge as Indy’s god-daughter. What feels like one last homage to the original Indiana Jones franchise is this fifth film in the series releasing on June 30th.

‘Spider-Man: Across the Spider-Verse’

The sequel to the popular animated Spider-Man movie is set to be released at the end of this year on December 14th. Miles Morales will explore the spider-verse more as he joins Gwen Stacy and a new team of Spider-Men to face off against a new villain. Phil Lord and Chris Miller still have the writing credits on this but the directors are Joaquim Dos Santos, Kemp Powers, and Justin K. Thompson.