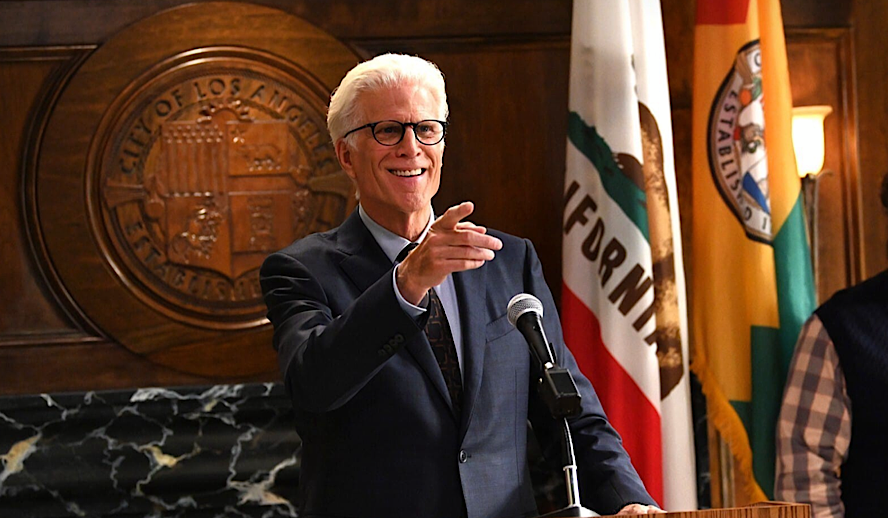 From ‘Saturday Night Live’ to ‘30 Rock’ and beyond, Tina Fey knows comedy. Fey and her creative partner Robert Carlock have been dominating the sitcom circuit, collecting Emmy nominations and global acclaim. With season two on the way, their newest sitcom, NBC’s ‘Mr. Mayor’ is set to join the ranks in their filmographies of accolades.

Who is Mr. Mayor?

The show follows Ted Danson as Neil Bremer, the newly elected mayor of Los Angeles. After the disaster of 2020 drove the former mayor to quit, Bremer came out of retirement and into the office. Bremer is ill-equipped to run a city, with a background in business and a lifetime of opportunities handed to him on a silver platter, so he relies on his team to run the show.

Bremer’s team consists of a band of quirky characters, all bringing unique antics to City Hall. Notably, Holly Hunter plays Arpi Meskimen, Bremer’s deputy mayor. The city’s chief of staff, chief strategist, and director of communications round out the cast of characters we see around the office. Bremer interacting with a young, hip, staff, as well as his teenage daughter is the perfect recipe for topical humor and pop culture references and serves as the engine of the show.

Marching to a New Beat

Fans of Tina Fey and ‘30 Rock’ were thrilled to hear that a spin-off was in the works. What would later become ‘Mr. Mayor’ was originally set to follow Alec Baldwin as Jack Donaghy of ‘30 Rock’, corporate powerhouse and CEO of General Electric, as he becomes mayor of New York. After a year’s worth of negotiations, Baldwin pulled from the project. Fey and Carlock approached Ted Danson to fill the role, as he was just wrapping ‘The Good Place’ after a four-season run.

Without Baldwin, ‘Mr. Mayor’ needed to change course, no longer functioning as a spin-off. Danson accepted the role but refused to leave Los Angeles, and ‘Mr. Mayor’ stayed on the west coast with him. So, it was back to the drawing board for the creative team. Many elements of Jack Donaghy’s character stayed, his wealth and entitlement, and his status as an older father, with Danson playing a single dad in his seventies raising a teenager, but the character itself went through major adjustments. The West Coast mindset is clear in Mayor Bremer, leaving New York aggression behind, substituting it laid back California tranquility. Instead of pushing policies and running meetings, Bremer spends his days accidentally taking edibles and filming TikTok dances.

Difficulties at the Jump

The pilot of ‘Mr. Mayor’ is a frantic attempt to find what works for the show. After the creative changes, it was clear that writers and creators needed to pave a new path for Mayor Bremer to flourish – He isn’t Jack Donaghy, so who is he? Episode 1 brings us Neil Bremer, a businessman turned politician who doesn’t know how to run a press conference, let alone a city. In an effort to balance out Bremer’s incompetence, we meet the mayor’s staff and his daughter in the pilot, but the lack of balance between workplace comedy and family comedy in a mere 22-minute time slot leaves each character lacking the screen time they deserve.

In the search for what fits for ‘Mr. Mayor’, however, we find a lot of hits. The pilot is full of life and comedy, jokes spanning from local LA humor to relatable high school experiences and pop culture commentary. The episode establishes the voice of the show, a base for the characters to be built on. The cast is easy to love, Ted Danson and Holly Hunter acting opposite each other is a sure shot to success. Fans of Crazy Ex-Girlfriend will recognize Vella Lovell as Mikaela Shaw and Mike Cabellon flourishes in his first principal role, Tommy Tomás.

As the season progressed, the issues with the pilot began to level themselves out. The lack of balance between workplace and family comedy did not carry on through the rest of the season, the writers prioritized the antics of the mayoral office, and Bremer’s daughter had less screen time. The dynamic between Bremer and his staffers is what makes the show great, and with each new episode, those relationships got stronger and stronger. When we did see Bremer’s daughter, her plots gained substance, allowing her to act as an actual unique character, rather than just a hold onto what was once Jack Donaghy.

The humor in ‘Mr. Mayor’ is on par with what we’ve seen from Fey and Carlock in the past, even if it took a few episodes to figure out how to make it shine. Each character and actor has their own unique strengths when it comes to setting up and executing gags. Mayor Bremer provides comedy through misunderstanding the lives of LA citizens, seeing the world from his upper-class, white, male perspective only. His employees bring comedy through self-centeredness, lack of social cues, and forming unlikely friendships with each other, both in and outside the office.

What We Can Look Forward to in Season Two

When we leave the main cast at the end of season one (and the Christmas Special released between seasons) they have begun to develop into strong leads. We can hope that these characters will continue to shine in season 2, likely getting more insight into their personal lives and backgrounds. There were infrequent instances of seeing the cast outside of the office, and each instance was successful in fleshing out the characters. Now that the characters have gone through a season’s worth of development, as well as forming relationships with each other, the plotlines can have increased emotional value, while keeping the humor that worked so well in the first season.

Season two airs on Tuesday, March 15 on NBC. Be prepared for a healthy mix of LA-based humor, character growth, budding relationships, and laugh-out-loud funny gags that we’ve come to expect from Tina Fey. After finding its footing throughout its first season, there are high hopes for the future of this show.