‘The Tourist’: Jamie Dornan’s Dark Comedy With the Twist of a Thriller 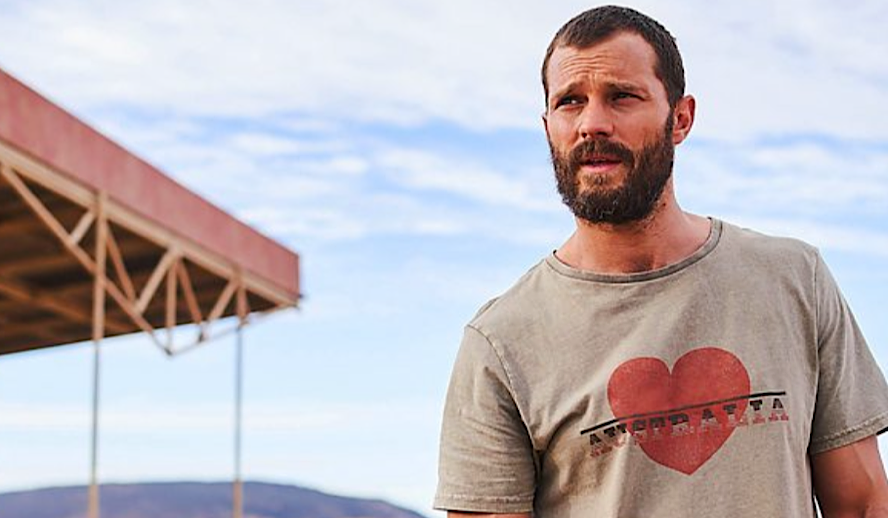 We’ve come a long way since the steamy days of Christian Grey in ‘50 Shades of Grey.’ Jamie Dornan has consistently proved that his acting range knows no bounds. Following global recognition as the sultry Christian Grey, Dornan has gone on to film an assorted mix of roles like the hilarious ‘Barb And Star Go To Visit Del Mar’ and the critically acclaimed ‘Belfast.’ Film buffs may remember his role as the romantic interest in ‘Marie Antoinette’ and since then, Dornan’s career has continued shape-shift quite remarkably.

Dornan’s talent honestly terrified many of us in ‘The Fall,’ his creepiest role yet. It’s important to note that Dornan prepared for the challenging role as the series’ serial killer by actually stalking women, but in a non-threatening way, obviously. Thankfully, the actor sprinkled some levity in his repertoire with the role as an assassin with a heart of gold in ‘Barb And Star Go To Visit Del Mar.’

Nowadays, you can find Jamie Dornan in his latest venture, ‘The Tourist’ a dark comedy with the twist of a thriller that is now airing on HBO. The series will be available on HBO Max with six episodes with a unique personality and is wildly unpredictable. The tones of the show transition from a thriller to hilariously deranged. Created by the minds behind ‘The Missing,’ the series is written by Harry and Jack Williams.

Imagine waking up one day with a blank slate, it could either be momentarily liberating or absolutely terrifying. ‘The Tourist’ follows the latter, featuring Dornan as an Irishman wandering through the Australian Outback until a violent car accident lands him in the hospital. Upon waking up, the traveler is devoid of all memories and a sense of self. Oddly, it forces viewers to reflect on past decisions and the way we interpret identity. As the plot progresses, the intensity of the series leaves viewers fixated on where the episodes are heading.

Armed with very little evidence of who he may be, he sets out on a journey to discover his memories along with a basic understanding of identity. It’s a daunting and emotionally charged path that is exciting to witness. The nameless stranger catches the sympathy of Helen, a rookie police officer played by Danielle Macdonald, who volunteers to help discover lost memories.

Why You Should Watch

Jamie Dornan and Danielle Macdonald deliver captivating dialogue throughout each episode. The series is set in a rural Australian town with local personalities that carry the weight of a chaotic plot with wholesomeness and comedy. The story shifts from different perspectives. It isn’t solely focused on the handsome man with full-on amnesia; we watch as Helen struggles with power within her professional and personal life.

Helen is ruthlessly subverted in all areas of her life. She yearns to earn the respect that severely lacks at work and at home. It’s interesting to assume why Helen is so keen on helping a random guy recover his identity. It could be a welcomed escape from her emotionally exhaustive world or maybe it has more to do with her desire to discover her own identity, along with her voice. As in the case of many thrillers, there’s a villain we love to help. In ‘The Tourist’ he comes in the form of Helen’s unbearably fiancé Ethan, played by Greg Larsen. Ethan has a particularly fragile ego that enables him to diminish Helen’s happiness. He mocks her sense of taste, makes her feel guilty over eating a burger, and diminishes her motivation to achieve more. It makes viewers want to keep watching just to enjoy that satisfying moment when Helen has finally had enough of Ethan’s insufferable ways. We’re rooting for you, girl.

Despite his characters’ mysterious past, Jamie Dornan uses his talents to find a way and make The Man feel layered and intriguing. Rather than feeling weighed down by the unknown, Dornan’s portrayal of a guy embracing a blank slate, makes his story feel endearing and all the more exciting. The lives of each character add a necessary dimension to the series’ unorthodox narrative. It’s an introspective look that forces many of us to consider how we would start again if we suddenly lost our memories.

In an interview with Entertainment Weekly, Dornan revealed that the experience of filming that moment his character finally discovers who he is. “So much of this character and this performance for me is, like any performance, you’re trying to stay present, but never more so than when everything is information that you’ve never heard before, particularly if it’s awful information, like that scene. I felt very raw at that moment, I felt very exposed, vulnerable, and kind of awful and terrible about myself. She was doing such beautiful work in front of me and it was having the impact that I felt that it should have. Sometimes you get yourself in a place where you feel so broken that you can’t actually stop crying. I felt a bit like that day in a good way, I guess. I felt very exposed, very vulnerable. You know, it’s hard stuff to hear, the hardest stuff to hear, so a lot of that luckily was on the page for me in terms of the writing. But, yeah, not an easy day, that.”

‘The Tourist’ is a promising dark comedy that is ruthlessly binge-worthy. Every episode leaves you hanging and feeling slightly uneasy. Despite Christian Gray being a stale wealthy man with vivid interests, Jamie Dornan is far from boring. The series proves that his comedic timing and delivery are above par and will surely line him up for future formidable roles. His interpretation of The Man makes this limited series exceedingly compelling.

HBO’s new show is a thrilling six-episode story with a man stumbling upon questions rather than answers. ‘The Tourist’ becomes a twisted tale of fate and the dangers a man must face to gain a sense of identity.