A Tribute to Studio Ghibli: A Masterclass of Storytelling and Cinema 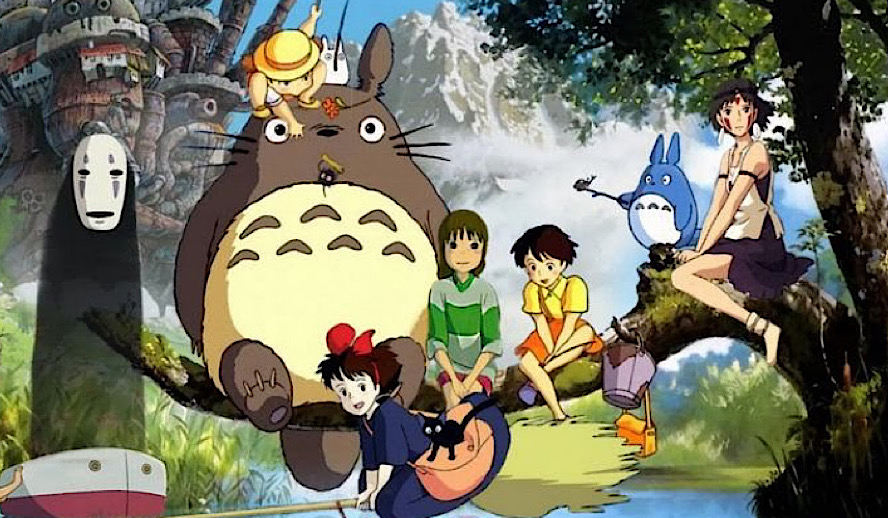 Studio Ghibli is one of the most magnificent and influential studios in Cinema history. It was founded in 1985 by Toshio Suzuki, Isao Takahata, and Hayao Miyazaki. To give readers a brief insight into the depth of the studio’s impact on film is this emotional tribute by ex-Chief Creative Officer of Pixar and Disney, John Lasseter, “Whenever we get stuck at Pixar or Disney, I put on a Miyazaki film sequence or two, just to get us inspired again.”

Five of Studio Ghibli’s films feature on IMDb’s Top Rated Movies list, and many of their movies regularly feature on top animated films and best movies of all times lists. Roger Ebert’s website has a page dedicated to the Studio Ghibli collection, and in his four out of four stars praise of ‘My Neighbor Totoro,’ he states, “Whenever I watch it, I smile, and smile, and smile.”

Needless to say, Studio Ghibli is a landmark of quality Cinema. Their films are iconic in the animation genre and showcase how the medium can be a unique vehicle for storytelling to audiences of all ages.

As stated above, Studio Ghibli’s creation came through the hands of Toshio Suzuki, Isao Takahata, and Hayao Miyazaki. How the three came together was an exciting sequence of events. Takahata got a job at Toei Animation as an assistant director, where he rose through the ranks. Miyazaki joined the team four years later as a talented animator, and the two began to work together, cultivating a lifelong working partnership. This relationship developed over the years, but their success had a few obstacles in the early stages.

Takahata and Miyazaki’s first prominent feature film together came in the form of the commercially unsuccessful ‘The Great Adventure of Horus: Prince of the Sun.’ Takahata directed, and Miyazaki was the key animator. The two, along with a few other employees, left Toei Animation not long after. Miyazaki and Takahata later found themselves working together again on several different Shin-Ei Animation and Nippon Animation projects. Miyazaki left Nippon Animation in 1979, but the two would collaborate again in the not too distant future.

Toshio Suzuki, a young reporter, came into the picture after being tasked to help start a new animation magazine, Animage. His first job was to write an article on an animated classic. Suzuki got in touch with Takahata and Miyazaki about ‘The Great Adventure of Horus.’ Neither wanted to talk about the film. A year later, Suzuki got in touch with Miyazaki about his first directed film, ‘The Castle of Cagliostro.’ They became acquainted through this and continued to cultivate a friendship moving forward.

Miyazaki told Suzuki about his idea for a movie set in an apocalyptic future where the world is at battle with nature. The remaining nations fight against each other and a toxic forest with deadly insects. Warrior and pacifist, Princess Nausicaä attempts to prevent all-out war and save the planet. Suzuki pitched ‘Nausicaä of the Valley of the Wind’ to higher-ups, but they turned it down. Animage instead opted for the story to be made into a manga. The manga became a huge success, and because of that success, a green light was given for the film. Takahata joined the project as a producer.

The commercial and critical success of ‘Nausicaä of the Valley of the Wind’ led to Suzuki, Takahata, and Miyazaki deciding to continue their pursuit of making animated feature films. This resulted in the creation of Studio Ghibli. Miyazaki and Takahata would be the studio’s creative forces, with Suzuki supporting as a producer on most films and would also serve as President of Studio Ghibli. Their official debut came in the form of ‘Castle in the Sky’ in 1986. Years later, in 2013, Twitter revealed when the film aired on television in Japan on August 2nd, a new Tweets per second was broken in relation to the film. Their legacy had grown quite a bit in-between that time.

While ‘Castle in the Sky’ was critically successful and allowed Studio Ghibli to continue making movies, it took some time for their early films to reach the heights they are known for today. That is not for lack of quality, though. Many of the early Studio Ghibli films are some of the best in their canon. Their next two films, ‘My Neighbor Totoro’ and ‘Grave of the Fireflies,’ were released simultaneously, and both feature in multiple top animations and top film lists. However, they didn’t make much money at the time of their release, even though they were critically acclaimed. A toy manufacturer later contacted Studio Ghibli about making the animated character Totoro into a stuffed animal, which helped bring in some profit. The character Totoro also became the mascot of the company.

The next film in the Ghibli roster was the one that put them on the map in Japan. ‘Kiki’s Delivery Service’ is the story of a thirteen-year-old witch fitting into a new community during her mandatory year of interdependent life. The film came out in 1989 and was the highest-grossing film in Japan that year. Studio Ghibli continued to create successful films, both critically and commercially, following the release of ‘Kiki’s Delivery Service.’

Early on in their tenure, Studio Ghibli films were dubbed by a few different companies before a deal with Disney. This deal brought along with it access to Disney’s resources, including publicity. The film that put Studio Ghibli on the international map was ‘Princess Mononoke’ in 1997. Famously, Miramax co-chairman Harvey Weinstein suggested edits for the movie and was sent an authentic Japanese sword with a note stating, “no cuts.” This was a policy from Studio Ghibli for international dubs after a disastrous experience with ‘Nausicaä of the Valley of the Wind.’

While ‘Princess Mononoke’ didn’t have tremendous success domestically in the United States, it did alert the world to the prowess of the studio with a worldwide box office haul of $159 million. A few years later, in 2003, ‘Spirited Away’ won the Oscar for Best Animated Feature. This is the only Academy Award that Studio Ghibli has won, but it wasn’t the last time they were nominated. In 2006, their film ‘Howl’s Moving Castle’ was nominated in the same category. Additionally, the last four films Studio Ghibli has been involved with were nominated for Best Animated Film at the Oscars.

If readers weren’t aware of Studio Ghibli before this article, we hope that they are now enriched by the story of one of the greatest studios to date. Their many films are well worth checking out.

Sadly, Isao Takahata passed away in 2018, but he leaves a legacy behind in his movies and his work with Studio Ghibli. Some of the best films he directed for the company include ‘Grave of the Fireflies,’ ‘The Tale of The Princess Kaguya,’ ‘Only Yesterday,’ and ‘Pom Poko.’

Toshio Suzuki has since stepped down as President of Studio Ghibli, but he is still involved with the company. Hayao Miyazaki has retired multiple times over the years, but he is back behind in the director’s chair with his film ‘How Do You Live’ next up on the slate for Studio Ghibli. His contribution to Cinema is already vast and was recognized by the Academy with an Honorary Award in 2014 at the Academy’s Governors Awards. Thankfully, his contribution isn’t finished.

Related article: Apple TV’s ‘Wolfwalkers’ is a Serene Delight from the Director of The Secret of Kells

We hope you’ve enjoyed this look into the legacy of Studio Ghibli. Below are five Studio Ghibli films as a sampler of the brilliant stories they offer.

A father and his two girls move to the country to be near their ailing mother. The two daughters realize their house is next to an enchanted forest, where they proceed to have adventures with the spirits who live within.

A ten-year-old girl pouts on her family’s move to the suburbs but soon finds herself in a world ruled by gods, witches, and spirits, where she has to save her parents and herself.

Grave of the Fireflies

An older brother and his younger sister struggle to survive after their mother dies and their father is at war in Japan during World War II.

The film follows the life of Jiro Horikoshi, the man who designed Japanese fighter planes during World War II.

Ashitaka defends his village from a demon but finds himself cursed as a result. He embarks on a quest to find the source of the curse and to see with eyes unclouded by hate. He finds himself in the middle of a war between the forest gods and a mining colony.