‘Over the Moon’: Netflix’s Animation Tugs at Your Heartstrings Brilliantly 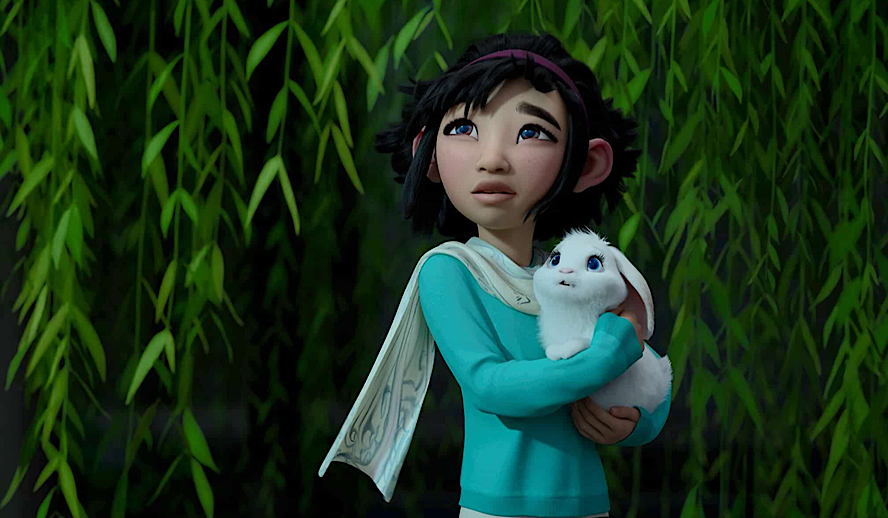 Get out your 2020 bingo cards- who guessed that the best original song of the year would be about mooncakes? That’s right, mooncakes, the popular Chinese delicacy traditionally eaten during the Mid-Autumn festival and featured in the latest Netflix original, Over The Moon. Glen Keane’s international directorial debut, Over The Moon, is a colorful explosion of family, heart, and will be one of the most tender stories this year has to offer.

Going Over The Moon

Fei Fei is a young Chinese girl living in complete happiness with her father and mother, and she begs to be told the story of the mythical Chang’e over and over. “Again, again! I love to hear about the moon goddess!” The young girl chants and her mother begins with a laugh. Chang’e and her eternal love Houyi were tragically separated when she drank an immortality potion, sending her to live forever on the moon while Houyi lived out his remaining years on Earth. While they were separated, the legend went that Chang’e was still waiting for Houyi on the moon above.

Now older, Fei Fei and her father worked the family business, a popular mooncake bakery, alone after the tragic passing of Fei Fei’s mother. Her story begins when a new woman enters their life in the hopes of marrying Fei Fei’s father, and Fei Fei decides she must remind her father of his eternal love by visiting Chang’e on the moon. With her smarts, ingenuity, and a touch of luck, our young heroine reaches the magical land of Lunaria and meets Chang’e, who isn’t all her mother’s stories cracked her up to be.

This Story Lands Among the Stars

Written by Audrey Wells, screenplay writer of other family favorites like The Game Plan and A Dog’s Purpose, this film perfectly encapsulates the feeling of being a child in a world that is too big to hold you. There are no villains in Over The Moon, only grief. No evil stepmothers, no witches to cast gruesome spells or horrible creatures to lurk in the shadows- just the natural progression of healing when you have lost something dear to you, creating a world that the viewer can appreciate with a deeper sincerity. The audience is given a chance to view our characters for what they are, human beings, creating an important space for children to learn about seeing the other side in every story.

This film is one in an inadequate handful of Asian-American cinema to be released through a popular network, also falling into an even smaller category that actually focuses on and properly portrays the culture it originates from. Chang’e and her story of pain and loss are well-known throughout Chinese households and is accredited for the beginning of the Mid-Autumn festival, which is celebrated in full swing by Fei Fei and her family. Food is discussed at great lengths, especially mooncakes, as detailed by Fei Fei’s soon-to-be new mother, Mrs. Zhang, “My Nai Nai always told me the circle of a mooncake is the symbol of a family coming together.” A love song is sung in interwoven Mandarin and English to commemorate the culture the myths originated from. Every moment of this film is a living, breathing testimony to the Chinese way of life and the most heartwarming elements of their family-based culture.

Over The Moon’s Cast Lights Up the Night Sky

Cathy Ang shines in her breakout role as Fei Fei, with her delicate singing voice to accompany her determined teenaged personality. Gifted with a colorful talent for narration and voiceover work, Ang truly brought Fei Fei to life in a believable, natural way that makes the audience cheer for her at every turn, and her surrounding cast of characters is just as loveable. Playing Chin, the younger goofball step-sibling is Bryce Taylor Hall, who’s formidable rapping skills and endearing scheming shine as the audience falls immediately in love with the young boy. Ken Jeong is a delight to our screens, as always, as a puppy-adjacent, anxious, and energetic green blob named Gobi. John Cho and Ruthie Ann Miles will bring a surprising tear to your eye with their heartfelt performances as the unnamed father and mother, with an always-welcome dose of Sandra Oh playing Mrs. Zhong added into their equation.

A roundabout burst of applause for Mrs. Phillipa Soo, however, who stole the show with her performance as the moody goddess Chang’e. Nothing like the goddess Fei Fei grew up imagining, Chang’e is withholding and keeps an iron grip on her citizens of the moon while denying Fei Fei’s request to remind her father of true love, spinning off the frenzied journey the young girl must go on to find an indescribable “gift.” Phillipa Soo, of Hamilton fame, gives an electric performance of the song Ultraluminary, K-Pop reminiscent and sizzles with life as Chang’e reminds everyone who the true queen is. Her glowing, moving portrayal of the goddess is a true highlight of this already luminescent film.

You’ll Love This to the Moon and Back

It is difficult to find a film in our day and age that is unapologetic in its childhood appeal- the innocent call for children to come love and adore the characters and the world they have built- and still enjoy it at any age. Movies must be edgy, must teach a lesson that hurts, to be considered “one of the greats,” and it is a delicacy to find such a film that deviates from this standard. Over The Moon is a film that can celebrate life while we have it, it tells us to think fondly upon the moments we are living while we are in them, to cherish family while they hold us tight. It is an ode to the ancient Chinese tradition of coming together and being one, celebrating the ability to gather. Animated films have a tendency to be overlooked, especially when marketed toward a younger audience, but this film deserves every ounce of accolade it will receive. Written, directed, and produced with a tremendous amount of heart, Over The Moon is a beautiful, moving reminder of what love and family can mean to all of us.