Hulu Continues it’s Animation Domination with ‘The Mighty Ones’ 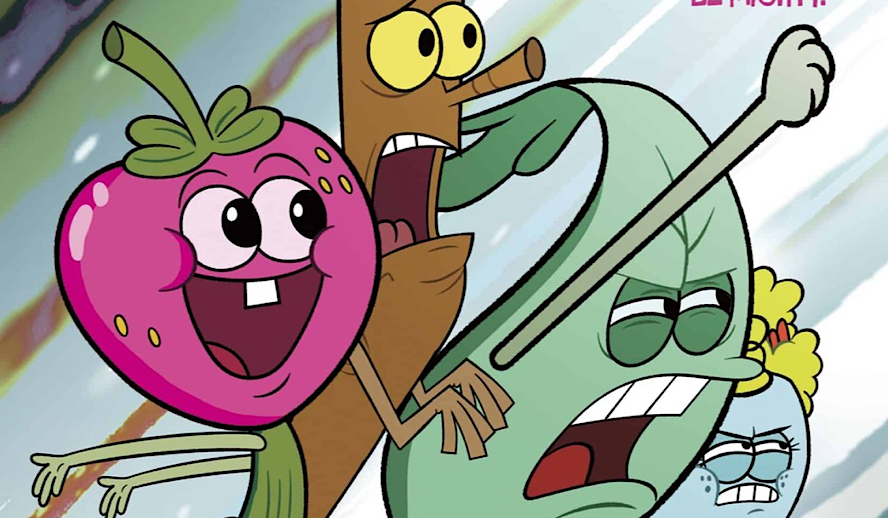 Adding to an already impressive roster, Hulu debuts its new Dreamworks children’s show, ‘The Mighty Ones’. The show is a lighthearted, silly, and oftentimes quirky comedy that primarily follows four characters: Rocksy, Twig, Leaf, and Berry. Their names are in relation to what they are, a fun wink from the creators, and appropriate for their target audience. Adults who are fans of animation, especially peculiar and unpredictable animation, will enjoy this show immensely. It’s a beautiful spectacle to look at, and features aesthetically pleasing, color-coordinated artwork throughout. Children will make up the majority of the show’s fan base though, as the humor and content are in line with popular children’s shows The Ren and Stimpy Show and Chowder. This show is as visually appealing as it is entertaining, and certainly not one to miss.

Related article: ‘Adventure Time’ is One of the Best Animated Shows of the 2010s. Here’s Why.

The pilot episode is full of hilarious, dry, deadpan one-liners, such as after Rocksy sinks into water, the rest of the crew devises a plan to rescue them. In response to them choosing who will go on the daring underwater mission, Berry says “I’m too floaty,” Leaf says “I’m too blowy” and, mocking the comedic rule of thirds, Twig says “I’m too… floaty?” ensuing an issue that propels the plot of the pilot episode. Rocksy is portrayed as the main character, since they’re in the debacle themselves, and the others team up to rescue them. Though later episodes do focus more on the other characters individually, Rocksy typically seems to be in a leadership role and seems to know exactly what to do, with the others serving as oftentimes silly comic reliefs. The show has a lot of unusual timing to employ peculiar humor, such as the short scene with the trio closing their eyes saying “let’s let the universe decide.”

Another example being when Rocksy’s voice bubble floats up from underwater to answer a question the other characters were attempting to figure out amongst each other, which, of course, is greatly misunderstood. The silly misunderstanding diverts all of their expectations, even having dier effects by causing them all to separate. As the episode progresses, the characters go at this goal over and over again, staying committed to it but failing almost every attempt, each worse than the one before. The show ends on a positive note, championing the power of friendship and collaboration by having the characters cleverly combine their ideas to save Rocksy. Sticking to the silliness of the episode, the show ends the same it began, with all the main characters playing their own version of basketball they call “hoop ball.” The show doesn’t exactly have an inspirational message, but still lighthearted, with every episode being a feel-good type of story.

It becomes clear that the show will revolve around these four characters and their random adventures, as the show puts us in a day in the life of the characters. Following a structure that was popularized for modern children’s television by Spongebob Squarepants, the episodes are split into two 15 minutes stories within a 30-minute episode. In the next section of the pilot, two new characters are introduced but then dismissed, Rocksy and Leaf then get locked in a dome during a picnic they were having with the other members of the squad, and they find ways to wiggle out of it. The structure the creators built provides limitless depth for these fun and unpredictable characters, and it’s always an interesting, imaginative ride. A sign of the expert roster of writers, producers, animators, and directors; What sets the show apart from other animation shows is its high-quality originality and distinct style.

A Lesson From The Mighty Ones: How to be Original During a Golden Age

The show isn’t on the nose, and the content doesn’t stick to the intelligence level of a child, yet has fostered an obscure kids type of humor. It’s unclear what world the show’s in, as it doesn’t follow the same physical laws as nature, there are just variations of earth-like things – the main characters being an example. It’s not explained the setting or place, the audience is simply supposed to know, but that’s not uncommon for a children’s show. With that being their target audience it’s bound to have a serious impact on the creative end, but not on the show’s viewers. If trying to attach some logic to it, it can be derived that the show’s creators have set these characters in a recognizable world, and are somewhat abiding by the laws of nature, but anthropomorphizing them to not disorient the target audience.

The show is exceptionally funny, perfect for kids, and silly for adults. A distinguishing quality that creates a pace resembling a nonstop fun rollercoaster, is the show, overall, has crazy energy to it. The characters, scenarios, and artwork can even be manic at times, and when it boils down to it, what stands out the most in this show is its eccentricity. It’s odd, berserk even, but it works. It’s very funny and entertaining and shows what lengths are required to be original during a golden age.

A Strong Style From a Strong Cast & Crew

Shows like Rick and Morty, Bob’s Burgers, and Big Mouth have introduced incredibly unique styles to adult animation. The Hollywood Insider writer Carrie Fishbane even called it The Renaissance of Animated Adult TV Shows. Children’s animation has seen the likes of Adventure Time, The Owl House, and Infinity Train, tough competition for anyone entering the market, especially during the COVID-19 pandemic, when animation has been the only production able to continue semi-normally. The Mighty Ones draws the spotlight right now because it’s alluring to watch stylistically as well. It’s colorful and aesthetically appealing, with brights and beautiful animation that’s influenced by real-life nature, with a fun, animated twist.

The creators include Lynne Naylor, known for her work on Monsters vs. Aliens and Samurai Jack, and Sunil Hall, known for Penguins of Madagascar and Pickle and Peanut. They’ve been working on this show since 2012, and the precise attention to detail in every shot shows this. The cast features a strong and diverse roster of comedians and well renown voice actors: Silicon Valley’s Josh Brener as Twig, Alex Cazarez as Verry Berry, Jessica McKenna as Rocksy, and Jimmy Tatro as Leaf. They deserve to be applauded for their work and are guaranteed to accumulate a strong viewership.