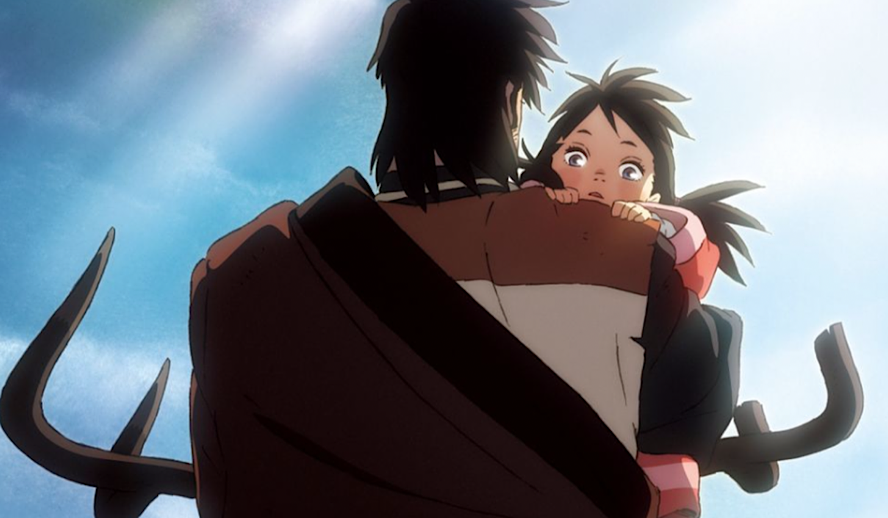 There’s no doubt ‘The Deer King’ is an adapted novel. It wanders into every possible corner of its highly-developed world like Tolkien prose. Every ridge, every tree, every flower; the animal skin huts of the pastoral tribes to the cobblestone streets of the capital city. They’re each part of a tapestry that unfolds slowly but sumptuously. Every still is like a page of a Patrick Rothfuss novel, endowed with a natural musicality and beauty.

The film is adapted from a series of Japanese fantasy novels by Nahoko Uehashi running from 2014 to 2017. Sound like a tall task for a two-hour movie to cover? It is – Deer King’s most glaring problem is the breadth of its world, at least for a single film. It renders the first fifteen minutes of the film crucial to understand yet impossibly dense with detail, as the story has so much to get to. The good news, though, is that ‘The Deer King’ is primarily visual in its storytelling. Who and what you need to know is presented as many times as you need it, and by halfway through, you realize you’ve actually got a pretty good grasp on it all. Directors Masashi Ando and Masayuki Miyaji earn your trust by merging the intricate details with a clear artistic vision that is irresistible from the opening scene.

In the opening scene, the Black Wolf fever descends upon a salt mine of the Zol empire, where the subjugated Aquafese people slave away. All are killed except for Yuna (Hisui Kimura), a young orphan girl, and Van (Shinichi Tsutsumi), a former soldier in the elite Aquafese division of the Lone Antlers. Van and Yuna, both bitten by the wolves carrying the “mittsual,” escape the mine to a freedom of pestilence, violence, and war.

When word gets out of a survivor from the salt mine, crowned doctor of the Zolians, Hohsalle, recognizes that Van’s infected blood could hold the key to curing the deadly disease. Little does he know, the leaders of the Aquafa are secretly leveraging the mittsual against the Zolians, because the Aquafa people are said to be immune. The Aquafese want Van dead, Hohsalle wants to save his people from the plague, and Van wants nothing but to be a father to Yuna, but when he finds himself apart from her, he teams up with some unlikely forces to save her.

For all its hasty world building, ‘The Deer King’ moves with deliberation. A type of meandering plot those who are familiar with the epic fantasy will recognize. For every intense battle scene, there’s a break to appreciate nature or a spiritual diversion. If, in one scene, the black wolves carrying the deadly mittsual are surging into an ongoing tribal battle of Aquafese and Zolians, in the next, we learn the age-old technique of taming the deer the Aquafese once ritually domesticated. It is a story, like all good fantasy, that values its moments of peaceful ordinary life as much as it does its heroic action sequences. It is equal parts an action-packed thriller and a story grounded in an appreciation of nature and paternal love. Complemented by this is a resplendent classical score composed by Harumi Fukki (‘Chronicle of My Mother,’ ‘The Emperor in August,’ and ‘Digimon Adventure: Last Evolution Kizuna’).

The animation, meticulous and gorgeous, is reminiscent of another Japanese studio: Ghibli. There’s a reason for that: Masashi Ando, making his directorial debut, hails from ‘Princess Mononoke’ and ‘When Marnie Was There’ experience, while Masayuki Miyaji is credited as assistant director on the timeless ‘Spirited Away.’ ‘Princess Mononoke,’ especially, seems to have had quite the influence over ‘The Deer King,’ as far as its lush forests and magical plagues.

And there is magic in this story, just not where you think it will be. Nature, a common Ghibli theme, possesses all the magic we need, as Van and Yuna show us. Fantastical things happen throughout (as to be expected in a Ghibli-esque fantasy), but the transcendent powers lie in nature. And if there’s anything the visual artists in this movie pull off, it’s making that idea look alluring.

‘The Deer King’ enjoys a few fortuitous benefits outside its own complex world. A pandemic and a raging war are the primary conflicts in the film, which endow it with relevance in 2022 that the novels could never enjoy. The novels, though, actually won a Japan Medical Novel Award for their thematic concentration on medical practice, which Hohsalle represents valiantly throughout the film. In fact, heroism in ‘The Deer King’ is expanded beyond the traditional, muscular conception. In a more classic sense, Van is a legendary warrior, whose physical power and bravery in battle, as well as some supernatural vision bestowed on him called the “Inside Out,” make him the obvious hero of the story. Yet, Hohsalle’s commitment to curing the disease and his belief in medicine coincides with the climax of the story. Both kinds of bravery in this film are not only necessary, but mutually dependent to save the day: without the Vans of the world there are no Hohsalles and vice versa.

The story takes on superstition toward medicine as well as tribal conflict, but they are ultimately subservient to larger themes exhibited by the heroes: loyalty, commitment, sacrifice, and love. Like all good fantasy, the story uses the sociopolitical issues of its world to tell human stories that transcend those boundaries.

The Deer King himself, Van, is given the ultimate choice between wielding power and a grounded life among nature. What does he decide? You’ll have to watch for yourself, and I suggest you do. ‘The Deer King’ isn’t perfect by any means. The third act certainly gets bogged down by the cluttered narrative structure and character arcs, but it is nonetheless a classic fantasy story that ultimately satisfies and keeps you in awe of its visual might. And with a few especially relevant themes to consider, you have all the more reason to hurry to the theater.