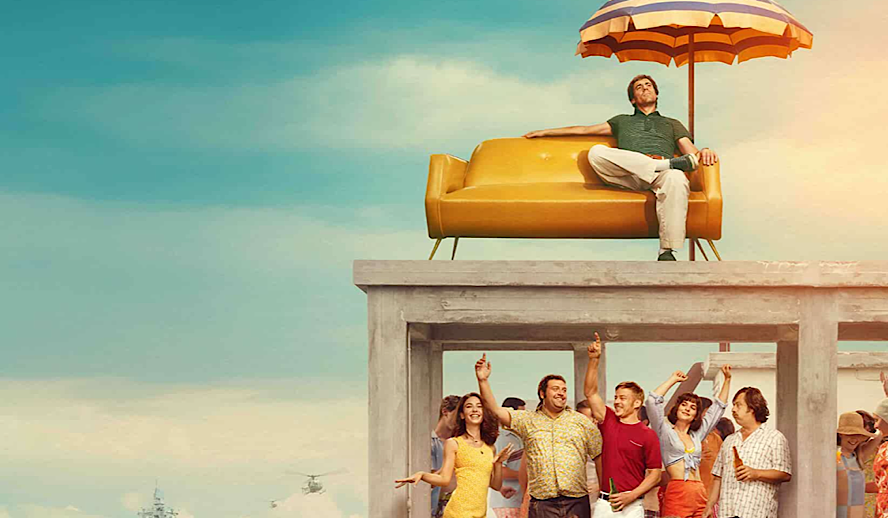 We open on an upbeat song, titles informing us that we are in 1968. A government official enters an almost dystopian-looking building to find a coughing, shivering, and desperate man. Upon asking what he wants, the man explains that he has come to petition the Council of Europe to save his island. “You bought an island?” an official asks. “No,” the shivering man replies. “I made it.”

So begins ‘L’incredibile storia dell’Isola delle Rose’ (‘Rose Island’ is the English title), the incredible true story of one engineer’s quest to build his own country in the middle of the ocean. The film, directed by Sydney Sibilia (‘I Can Quit Whenever I Want’) and starring Elio Germano (‘Bad Tales’, ‘Hidden Away’) and Matilda De Angelis (‘The Undoing’, ‘Divine’), captures the endeavors of Italian engineer Giorgio Rosa to gain true independence and freedom from the government and pursue a life unrestricted by the inconvenience of the law.

Related article: ‘The Life Ahead’: The Legend Sophia Loren’s Oscar-Worthy Compelling Story of Courage and Bond

Related article: The Rise Of South Korean Cinema: A Brief History Of The Country’s Excellent Film Industry, What To Watch After ‘Parasite’

Rose Island – The True Story of the “Prince of Anarchists”:

Set against the backdrop of the hippy movement of the 1960s and 70s, Rosa’s quest for freedom is set alongside the Civil Rights movement, protests against the Vietnam War and the Prague Spring. 12km outside the coast of Rimini, the hopeful engineer erected a 400 square meter platform in the middle of the ocean that would become a beach club, an independent state, and a perceived threat to the Italian government.

The story is so unbelievable that it has to be true. While a famous local legend in Rimini, the story of Rose Island had never found international notoriety, making it the perfect source material for a biopic. While originally reluctant, Rosa eventually gave Sibilia and producer Matteo Rovere (‘Romulus’, ‘The Beast’) permission to condense his greatest achievement into two hours of entertainment.

And entertainment is what the film brings. The bright colors and open shots of the ocean are a balm to the eyes used to staring at the same walls of COVID-19 lockdowns, accompanied by an upbeat soundtrack including The Kinks, Shocking Blue, and Barry Maguire. The quirky cast, based on the Island’s real-life founders and governors, are each gifted a more fun introduction than the last, assembling the motley crew the film centers around. Germano brings both charm and depth to the lead role on which you alternate between rooting for and rolling your eyes at – thought we end on the former. By the film’s conclusion, what seemed to be a naive and childish dream has grown into a potent symbol of what we can achieve when the word ‘impossible’ exits our dictionaries.

We all understand where Rosa was coming from. Who hasn’t had the desire to break away from their parents, a demeaning job, or the limitations of society? That said, it’s clear from the opening scenes that Rosa appears to be more of an ideas man than a practical one. This is all deftly outlined in the film’s opening act, which shows that Rosa has managed to build not only his own car but his own plane – only to be arrested on not seeing the point in registering either. Later, he decides to spend a night on the newly completed island, reasoning it’s a “beautiful sunny day,” and not giving a thought to the incoming storm that night will bring. This lack of forethought is implied to be why he lost his love interest Gabriella, and the film isn’t shy in letting us know that this island venture is really an extravagant gesture to win her back.

Don’t believe everything the film tells you though. In reality, Giorgio and Gabriella were happily married with a young son throughout the island’s construction (although the love story does add much-needed stakes and drama to the tale, so we won’t hold this fabrication against them). The construction of the island, which is glossed over with a quick engineering explanation in a bathtub before moving on to more exciting plot points, took ten years total to build with his limited resources, instead of the few months described in the film. Rovere said in an interview for Sky News,  “Because [Giorgio] didn’t have much money, he used a very small crew of friends and some workers to build the island. When we built the island for the movie we spent a lot of money and we needed hundreds of people. It was crazy that he made the same with just some friends. He was a genius.”

Rosa’s bid for freedom more relevant than ever

This is where the heart of the film lies – in the island’s founder using that genius to provide a slice of freedom to the masses, and present-day society craves that freedom just as much as, if not more than, the youth of the 1960s. Technology, and especially the rise of social media, has become both liberator and captor; a panopticon from which we can see an escape we don’t wish to take. We have long since traded in happiness for convenience. If Rose Island existed today, would it still attract guests if they were unable to Instagram the experience?

Nothing Rosa accomplished was convenient. Even after the incredibly tricky building of the platform, Rose Island itself only lasted one season. The public and even the island’s own ‘government’ lost interest as the weather started to turn cold, and the Italian officials reached out with offers of an easier, cozier life under their supervision.

In the film, this offer is tempting enough even for Rosa, only to be spurred on at the verge of quitting by a pep talk from his father. The Republic of Rose Island was eventually defeated by ‘the man’, but the important part is that it was fought for before being blown to pieces and the remains eventually taken by the ocean.

In a year that was filled with so much lethargy, confinement, and fear of the future, Rose Island was a breath of fresh air. It’s fun without feeling frivolous; quirky while staying grounded. Each cast member holds their own in a story that feels high stakes without tipping into melodrama. We can all relate to – especially after 2020 – needing a little more freedom in our lives.

‘Rose Island’ is now available to view on Netflix.