‘Nope’: A Grand Spectacle in Filmmaking and the Horror Genre 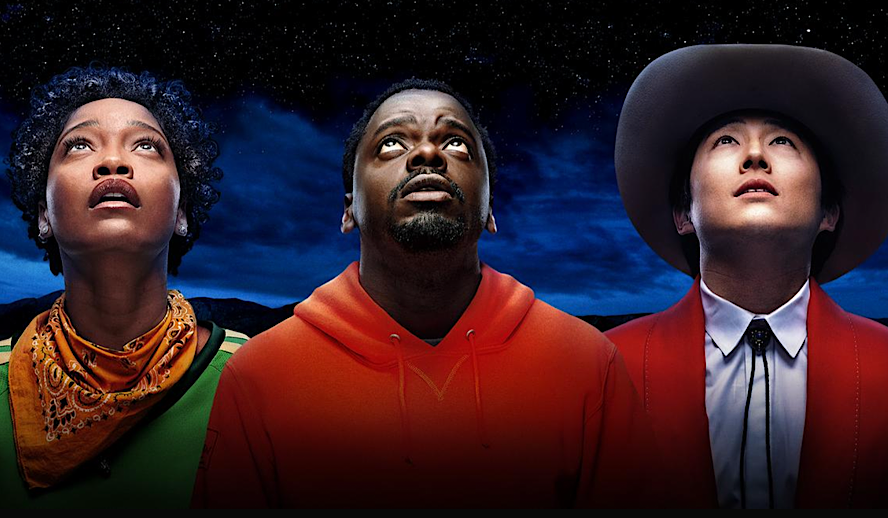 Jordan Peele’s ‘Nope’ has stirred up a lot of conversation recently. One word that has been brought up in these conversations, again and again, is the word spectacle. This word has continuously been attributed to ‘Nope.’ This is because, put simply, ‘Nope’ is nothing short of a spectacle. The film as a whole also seems to revolve around that very word. In ‘Nope,’ Peele ditches the politics found in his two features ‘Get Out’ and ‘Us’ and instead focuses on social commentary. Specifically, Peele decides to look at and examine a spectacle and how society responds to such a glorious object.

The plot of ‘Nope’ is hard to summarize without giving away too much information but I will try my best. The film follows siblings O.J. and Emerald, known as Em, who are horse trainers for Hollywood. Their father dies a mysterious death after an object falls from the sky and impales his skull. After this, the pair notice something odd in the sky and decide to try and get the money shot of that object so that they may become rich and famous and finally have a definitive explanation for their father’s unfortunate passing.

This plot is extremely original and intriguing and the defining feature of ‘Nope’ as a whole. The story is never slow and at times moves at breakneck speeds. There is also a subplot, which at times may appear to not have anything in common with the main plot following O.J. and Em, but this is simply not the case. This subplot concerning a chimp named Gordy is a spectacle in itself and again examines how society responds to a spectacle, specifically how we glorify and chase them.

Keke Palmer is the stand-out in a ring of great performances from the likes of Daniel Kaluuya and Steven Yeun. Her portrayal of Emerald Haywood exudes energy and enthusiasm. She is an icon on screen, and makes it hard to take your eyes off of her. Daniel Kaluuya’s character is written as much more reserved and, as a result, Kaluuya’s performance is more stoic and quiet. The key to his character is not only in his carefully chosen set of words, which he speaks, but also in his artful mannerisms.

Steven Yeun is also impressive as an opportunist known as Jupe who works at his own amusement park. There he has set up a new show which will be sure to shock guests and provide them with something which they have surely never seen before. Yeun is able to accurately articulate in the film his character’s strike-while-the-iron’s-hot personality and his character’s tragic past. Another important piece of ‘Nope’ is Brandon Perea’s portrayal of Angel, an employee at Fry’s who helps to set up O.J. and Em’s cameras to catch the money shot of whatever they believe is in the sky above their house. Perea provides comic relief for the film and he does so very well. No moment is dull while he is on screen, especially when he is with Keke Palmer whose character he ended up having great chemistry.

The madness behind the cloud

As I mentioned previously, Peele decides to ditch the politics which played such a prevalent role in his two previous films in ‘Nope.’ Instead, he opted for a much broader form of social commentary to tackle in this new film. There are a lot of moving parts in ‘Nope’ and a lot of different themes and messages to try and keep track of and follow throughout the film. Everything from conversations on conservation and the watchful eye of the media and news sources like TMZ play a role in ‘Nope.’ But without a doubt, the most important and prevalent theme in the film is the one that deals with what the film is as a whole, a spectacle. ‘Nope’ in the sum of its parts is nothing short of cinematic grandeur and of course a spectacle on screen. This word is thrown around a lot in the media and online when discussing the film, and is even used a lot in this review, because it is what the whole film is about.

32 Facts on Jordan Peele: Fact-Checked Series – ‘Get Out’, ‘Us’, ‘Blackkklansman’

Peele through ‘Nope’ attempts to tap into how we as a people respond to a spectacle, good or bad. What do we do when the unexplainable occurs? When something is so wild and unpredictable that there is no way to justify its existence? These questions and more are answered in ‘Nope’ as different characters respond in similar ways to whatever is happening in one cloud which looms over a small and isolated town in California.

In ‘Nope’ Peele takes the madness to a whole new level as more and more craziness occurs. This insanity only works to expand the questions that all audiences have in their minds while they watch the film unfold. But do not fear as all of this is deliberate and so are the feelings that most audience members may experience while watching the film. Peele does this all to push the idea of his film being nothing short of spectacle, and Peele certainly takes no chances and pulls no punches in his attempts to ensure that his film lands that label, which in the end it most definitely does. This, in the end, all works in Peele’s favor and lays out a message and theme which is central to us and how we function. Peele’s new film is an examination of who we are and what we do when we are faced with absurdity. This then mixes with the horror, thriller, and even western elements of the film to bring about a totally unique genre film that has a strong backbone and core.

How Steven Yeun is Creating a More Authentic, Representation of Asian Americans in Hollywood

‘Nope’ as a whole

All in all, Peele outdoes himself with ‘Nope.’ The film comes complete with interesting characters, an insanely original plot, and a strong and important emotional backing to provide the film with thematic elements which are in touch with current issues today. While politics are not as present in this film, there are still important takeaways to grab hold of all throughout ‘Nope.’ In closing, ‘Nope’ is nothing short of elevated horror at its finest and another revelatory outing by the no doubt soon-to-be-great horror director Jordan Peele. It is without a single doubt a spectacle to behold.

Be sure to check out another upcoming horror film from Universal in ‘Halloween Ends,’ which hits theaters on October 14th.