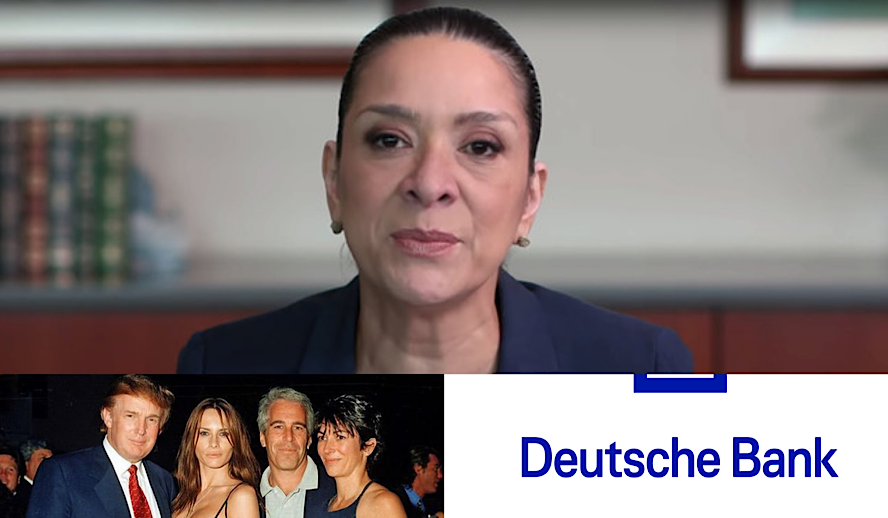 Why did the US government not protect the federal judge Esther Salas who stood up against Deutsche Bank, Jeffrey Epstein and Ghislaine Maxwell? Is justice still possible in the United States of America – the land of the free and the brave? What happens when a US federal judge tries to bring justice to the victims of terrorists called Jeffrey Epstein and Ghislaine Maxwell? What happens when the same judge is assigned to the case involving Deutsche Bank’s continued work with Epstein? This is what happens in the FREE LAND of the BRAVE – United States of America: THAT US federal judge’s son was assassinated and husband injured critically to stop her from going forward with the case.

Esther Salas, a US federal judge, stood up for justice against the Deutsche Bank and Jeffrey Epstein-Ghislaine Maxwell. Epstein and Maxwell had terrorized the United States of America as well as other countries for decades while enjoying close friendships with rich and powerful people which includes President Donald Trump and First Lady Melania Trump. A US federal judge was brave enough to take on the case that would rightfully charge Epstein/Maxwell and Deutsche Bank – and that same judge has been targeted for her bravery. By targeted I mean the United States government failed to provide adequate protection for Judge Salas – as there are powerful people trying to stop the Epstein and Deutsche Bank case from going to trial. The price she paid for attempting justice for the people of USA – her son has been murdered at her home by an assassin – and her husband is in critical condition after being shot several times.

Is the USA Still the Land of the Free and the Brave?

US Federal Judge Esther Salas and her husband attorney Mark A. Anderl had just finished a weekend celebration for their son’s 20th birthday when tragedy rang at their front door. The 20-year-old college student Daniel Mark and his father were met with gunshots at their New Jersey Home. In her official video statement, Judge Salas said, “I heard the sound of bullets and someone screaming ‘No!’ I later learned that this monster had a FedEx package in his hand”. Daniel bravely guarded his father from the shooter’s first bullet, But the shooter proceeded to further target attorney Mark Anderl, tragically shooting him three times.

While Mark Anderl lies in critical condition, Salas’ son, Daniel, died at the scene of the crime. “[Daniel] was well-respected, well-liked by his peers and the faculty”, says Jack Timko, director of external relations at St. Joseph High School, where Daniel graduated cum laude in 2018. As a college student, Daniel made the Dean’s List last spring at Catholic University and was an usher at the family’s local church. Daniels’ death is tragic and serves as a disturbing reminder of how easily and dangerously accessible information has become in the 21st century. Even information of those judges who are risking their lives to bring justice to victims.

“In my case, the monster knew where I lived, and what church we attended…at the moment, there is nothing we can do to stop it, and that is unacceptable”, Judge Salas says. It certainly begs the question as to why the information of federal judges, individuals who often make polarizing and momentous decisions, even accessible to the public in the first place?

Esther Salas believes that the attack on her home was due to her position as a judge. Rolling Stone reports that Salas is currently overseeing a class-action lawsuit brought against Deutsche Bank on behalf of investors. The suit is underway as Deutsche Bank allegedly “failed to properly monitor customers that the Bank itself deemed to be high risk, including, among others, the convicted sex offender Jeffrey Epstein.” Esthers’ involvement with the Epstein case made her a prime target for malice.

Having information about government officials at the public’s fingertips  should serve to better keep them accountable – not be a threat to their livelihood. Acts of protest like the one seen outside the US Postmasters home in DC are safe, harmless, and appropriate for holding to account the unconstitutional actions of those in power, seen with the recent sabotaging of our postal services. Although America continues to fail itself in keeping those in power accountable, government officials’ information simply should never be easily accessible to the public. Every American should be enraged and embarrassed that the country which Salas serves/protects was not safe enough for her to do her job and be protected. Nothing can bring this brave hero’s son back. Nothing.

It doesn’t matter how many acts of gun violence our country faces. Our political industrial complex, long controlled by lobbyists like the NRA Institute for Legislative Action (NRA-ILA), will continue to influence our democracy and slip us deeper into corruption. We need to enact laws that shape our country in a way that makes more sense – COMMON SENSE. Why does it have to come down to civilians storming the gates of Louis DeJoy’s DC home for him to release a statement explaining why he and the Trump administration are violating the postal clause of the constitution? And more importantly, why is no one being held accountable for sabotaging our postal system mere months before the 2020 election?

If those in power were kept accountable, there would be little to no reason for their personal information to be left open to the public. If we had stricter gun reform, individuals wouldn’t fear for their lives every time they made a  (constitutional) controversial decision. It’s time for America to start making sense again.

Close to the end of Salas’ statement, she calls for those in power to step up so that her son’s death won’t be in vain. “Now more than ever, we need to identify a solution that keeps the lives of federal judges private”. CNN reports that the US Marshals Service, which protects over 2,700 judges, has reported that threats to judges have grown significantly in the past five years. Since 2016, threats and inappropriate comments made to the judiciary have nearly doubled, totalling about 4,500 last year alone.

Judge Salas remarks that , “together we can find a way, let’s commence a national dialog, let’s work collaboratively to find a solution that will safeguard the privacy of federal judges. We can not sit back and let another tragedy strike.” As civilians, it’s our duty to commence the dialog on safety and a more sensible America, and it begins at the polls. These truly are unprecedented times, but it’s more important than maybe ever before to show up and show out in defense of our democracy.

Judge Esther Salas has risked her family and life to bring justice to the victims of Jeffrey Epstein, Ghislaine Maxwell and Deutsche Bank – the least the US government can do is give protection and, now, justice to Judge Salas. Allow Judge Salas to attempt peace, safety and freedom for the USA and the world. Justice for Judges who stand up for the people.