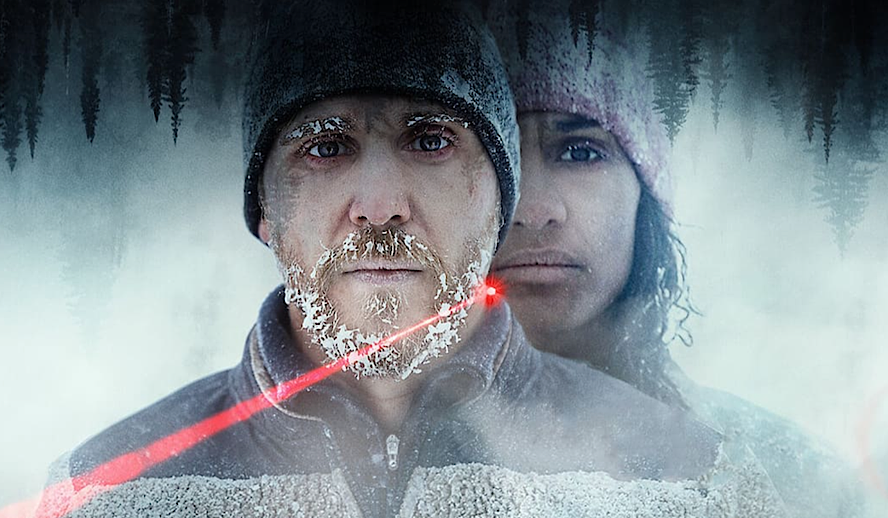 Released February 12th, 2021 on Netflix, ‘Red Dot’ is not your typical Valentine’s Weekend flick. That being said, if you’re looking to experience a visceral, gripping adventure in the constraints of a relationship drama, you’re in the right place.

‘Red Dot’ follows Swedish couple Nadja (Nanna Blondell) and David (Anastasios Soulis) as they embark on a getaway in order to revive their relationship. With David busy with his engineering work and Nadja dedicated to her medical school studies, their relationship had been suffering for quite some time – so much so that Nadja hasn’t even told David that she’s pregnant. The two make their way to the Northern Swedish Mountains for a skiing trip, setting the stage for a romantic weekend excursion. However, while camping in the wilderness their first night, they suddenly find a red dot pointed at their tent, poised to shoot. Realizing they are being hunted, they must try and escape the endless, merciless tundra before they are caught by their predators or simply fall victim to the cold.

With the oversaturation of genre films on Netflix, it’s easy to be weary of the company’s torrential releases. However, ‘Red Dot’ triumphs as a successful thriller, exceeding genre expectations where certain Netflix films fall flat. For example, one thing ‘Red Dot’ does well is that it’s understated in its nature. The film doesn’t feel over the top or flashy; in fact, it feels stripped to its core as much as possible. Because it is a story constrained to two characters and one location, audiences are really allowed to immersive themselves into this relationship and atmosphere.

This intentional, minimalistic focus puts you right in Nadja and David’s shoes, sowing audiences with a great sense of anxiety and dread as we too try to escape this nightmare. Nadja and David’s hunters, who are unseen until the end of the film, succeed as an omnipresent threat and constant danger. The filmmaker’s decision to keep their presence sparse makes them even more terrifying, ala the shark in Jaws. And while the film has quite violent and graphic scenes, whenever any gore is employed, it feels necessary and earned.

Finally, ‘Red Dot’ employs a number of bait-and-switches – successfully depicting a cyclical “calm before the storm” throughout the film. To find out which note the film ends on, you’ll just have to watch it yourself.

‘Red Dot’ – Amplifying the Dichotomy of Life and Death

Thematically, ‘Red Dot’ repeatedly juxtaposes life and death, reminding audiences that the two are merely opposite sides of the same coin. The film begins with David’s marriage proposal to Nadja, showing a seemingly happy couple, before skipping years later where they are overworked and unhappy. The harsh juxtaposition of the beginning honeymoon phase of a relationship to a possible breakup effectively sets the stage for several severely positive and negative tone shifts throughout the film. For example, the Swedish mountains themselves are a terrifying contradiction. When we first arrive in the wilderness, it’s breathtakingly beautiful, with the couple camping under the Aurora Borealis. But as day turns to night, so does that beauty transform into deadliness (think ‘The Revenant’). From limited vision in a snowstorm and the instability of ice-covered lakes, the mountains turn out to be the complete opposite of a romantic getaway.

Ultimately, these juxtapositions serve in heightening its negative counterparts, making ‘Red Dot’s’ terrors even more amplified. For instance, Nadja’s pregnancy makes her will to survive even more important. The killers’ pursuit of her also makes their will to kill much more abhorrent – as a baby, emerging life, is the complete antithesis of death. These are simple juxtapositions and oppositions, but they work well for a story concerning survival. Only when you feel safe and secure can horror and fear really do its number on you.

Social Commentary and Contextualization in 2021

Race dynamics are unexpectedly a big part of ‘Red Dot,’ with Nadja and David being an interracial couple. Early on in the film, they have a run-in with a pair of racist brothers, who vandalize their car with racial slurs against Nadja. This is why, when Nadja and David are being hunted, they assume the brothers are the ones at the reigns. Though politics are not a huge focus of the film, these instances act as a good reminder that Black communities around the world face racism and hate crimes – and that these racist attitudes are institutional and persist, even in countries not explicitly racist like the US. This insight into how racism exists in other parts of the world is important for American viewers to engage in, especially during Black History Month. The fact that Nadja is the only person of color in the entire film definitely has significance, making her a much more vulnerable target than David. Unlike other characters, retaliation and anger on her end have far more consequences.

‘Red Dot’ will also be attractive to audiences currently immersed in the conspiracies surrounding missing people in national parks. Even though this is strictly a US phenomenon, anyone following that discourse will enjoy ‘Red Dot’, which in short, doesn’t make you want to camp in the wilderness anytime soon. For those unaware, these investigations have been gaining internet popularity due to documentaries like Amazon’s ‘Missing 411’ and other TikToks bringing attention to conspiracy theories – such as one claiming that feral cannibals live in national parks and lure campers to their deaths.

Overall, ‘Red Dot’ is a gripping thriller film that will keep you on the edge of your seat during its short hour and twenty-six-minute run. With great performances and an isolated environment, setting it apart from other flashy, exhibitionism Netflix films, the film is a fresh breath of air for viewers looking for something new.