A Eulogy for the Historical Epic Movies: Is it the End of Films Like ‘Gladiator’, ‘Braveheart’ & More? 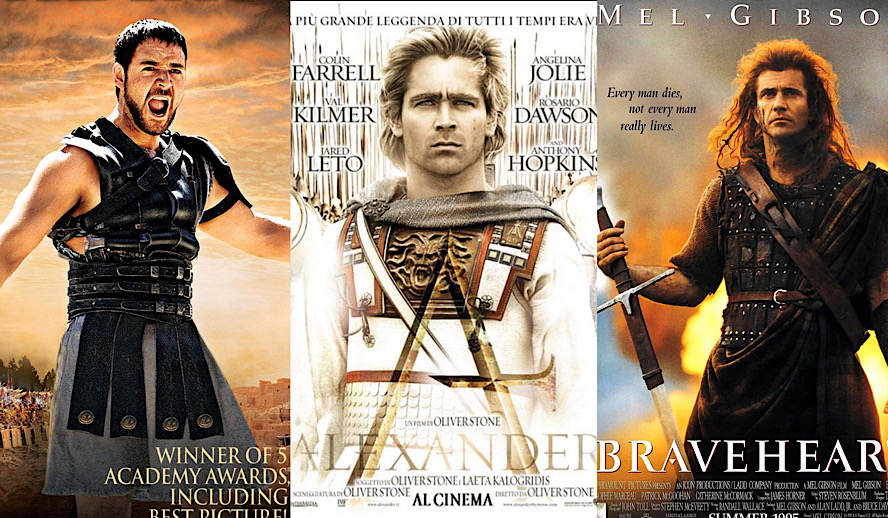 If you were alive in the ‘00s, you must remember the cavalcade of historical epics whose sepia-toned posters were mainstays of the cinema walls–’Gladiator’, ‘Troy’, ‘300’, ‘Apocalypto’, ‘Kingdom of Heaven’, ‘The Passion of the Christ’, ‘The Last Samurai’, ‘Master and Commander: The Far Side of the World’–the list goes on. You may wonder if ‘The Passion of the Christ’ truly belongs here, but the religious and historical are so closely entwined that I might as well conflate them here–is ‘Ben-Hur’ (any version) but one or the other? What about ‘The Mission’, or ‘Silence’?

The historical epic has always been the biggest of show biz–consider ‘Gone with the Wind’, famously the highest-grossing film in history (adjusted for inflation) and the most expensive to produce at the time (though possibly losing out to the $4 million 1925 ‘Ben-Hur’). If that isn’t as Old Hollywood as it gets, we can go back even further–’The Birth of a Nation’.

The industry quickly scaled up–’Gone with the Wind’ famously exhausted the Screen Actors Guild’s 1500 members to play dead and wounded Confederate soldiers, bolstering that even further with 1000 dummies. The famous chariot race scene in ‘Ben-Hur’ required 15,000 extras and an 18-acre backlot, but none of that compares to the 300,000 extras who attended Gandhi’s funeral–in which movie, you can probably guess.

In short, the “historical epic” is aptly named–it overlaps with a number of subgenres, but you know it when you see it. Religious epics like ‘Ben-Hur’ and ‘The Ten Commandments’ preceded the ‘60s boom of epic historical dramas like ‘Spartacus’, ‘Lawrence of Arabia’, ‘Cleopatra’, and ‘Doctor Zhivago’–this was the first golden age.

Director David Lean (‘Lawrence of Arabia’, ‘Doctor Zhivago’, and also ‘The Bridge on the River Kwai’) was a giant of the era whose wide shots of the Arabian desert remain the definition of an epic landscape. It’s worth it to mention his usage of special spherical lenses and 70mm film, marketed as Super Panavision 70–he wasn’t the first to use it (that honor goes to ‘The Big Fisherman’, a lesser-known religious historical drama about the life of Peter the Apostle), but Lean used it better. ‘Lawrence of Arabia’s languid pace and breadth of movement is a direct result of the massive format–quicker cuts and movement would be literally nauseating to theater audiences.

The popularity of historical epics would sharply decline from the ‘70s onward, displaced by the grittier realism of New Hollywood directors and the cynical angst surrounding Vietnam and the Cold War. Of course, I don’t deign to establish a causal link between the social conditions of the time and the decline of the historical epic’s popularity–but it’s very tempting to speculate.

Historians have the privilege of regarding the past as a mere accumulation of happenings, but the historical epic must tell a story, weaving a narrative around sympathetic protagonists to do so–the genre is subsequently prone to facilitating propaganda. Consider the very first entry–’The Birth of a Nation’. Compare that to ‘Gods and Generals’, which came out in 2003–Ronald F. Maxwell and Ted Turner’s 3½ hour tribute to the Lost Cause of the Confederacy.

The resurgence of the historical epic in the ‘00s was led by Mel Gibson’s ‘Braveheart’ and Ridley Scott’s ‘Gladiator’, the latter more so–in fact, Scott would continue to lead the new wave with films like ‘Kingdom of Heaven’, ‘Robin Hood’, and ‘Exodus: Gods and Kings’, though their middling successes could perhaps be attributed to (or simply referred to as) the genre’s subsequent denouement. Gibson would follow up on ‘Braveheart’ with ‘The Passion of the Christ’ and ‘Apocalypto’, both notable for attempting to have dialogue completely in their respective historical languages.

Other successful films of the second wave included ‘Troy’, featuring Brad Pitt in his prime as the hero Achilles, ‘Master and Commander: The Far Side of the World’, which featured Russell Crowe of ‘Gladiator’ fame and Paul Bettany (who puts the Vision in ‘WandaVision’), Martin Scorsese’s ‘The Aviator’, which featured Leonardo DiCaprio as the eccentric tycoon Howard Hughes, and Zack Snyder’s heavily-stylized ‘300’. Many other films didn’t do so well. Oliver Stone’s ‘Alexander’ stands out as a critically-reviled box-office bomb, coming out the same year (2004) as the middlingly-received ‘King Arthur’. Ridley Scott would also never replicate the success and iconicism of ‘Gladiator’, even with Russell Crowe back to lead in ‘Robin Hood’.

Since then, the historical epic has all but dropped off the face of the Earth. Few notable examples exist in the 2010s–both Darren Aronofsky’s ‘Noah’ and Scott’s ‘Exodus: Gods and Kings’ came out in 2014, but were controversially received for the casting of White actors in Biblical roles. ‘King Arthur: Legend of the Sword’, which came out in 2017, was a box office bomb that cut short a planned six-film franchise. Netflix has produced a couple, and I really mean a couple–’Outlaw King’, starring Chris Pine as the Scottish King Robert the Bruce, and ‘The King’, starring Timothée Chalamet as Henry V.

For now, it seems that interest in the historical epic is low–but is it adieu, or au revoir? In the modern age of increased social scrutiny, it’s tempting to surmise that a greater pushback against conventional historical narratives has contributed to the genre’s dwindling popularity. In fact, history lives on–but in different ways. More films than ever are being produced about America’s underrepresented Black history, by Black creators, including films like ‘Selma’, ‘Ma Rainey’s Black Bottom’, and ‘Judas and the Black Messiah’.

It’s also tempting to chalk it up to the tides of trends–can it be assumed that one day, inevitably, the historical epic will make a bombastic return? For now, it’s au revoir–but only time will tell.