‘Great White’ Is A Digestible Story, Just Good Enough To Sink Your Teeth Into 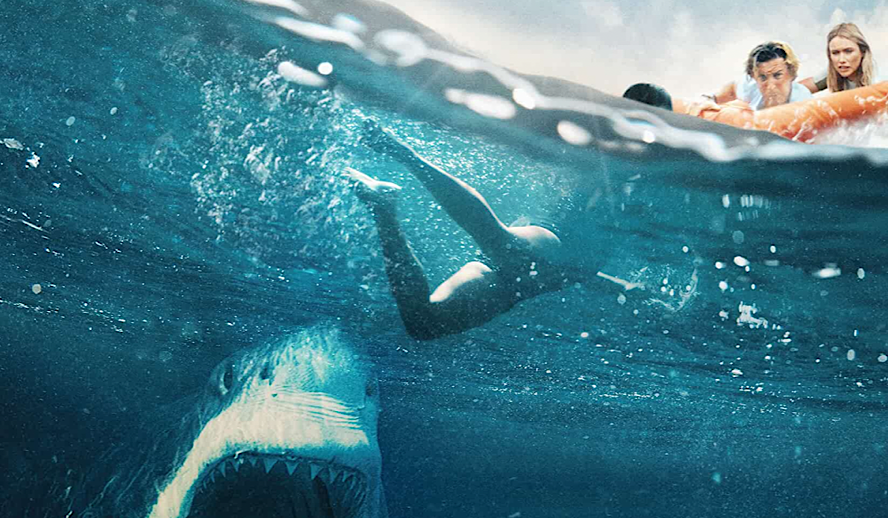 Director Martin Wilson’s ‘Great White’ doesn’t boast the same ludicrous ideas that you’d see in shark films such as ‘The Meg’ or in the ‘Sharknado’ franchise, with plots as wild as the oceanic predators that star in these loud and proudly bizarre features. Instead, Wilson takes the shark back to its roots with a simple and tame (by today’s standards) sea creature feature where the great white reverts back into the silent but deadly killer all animals, both land and sea, are supposed to fear rather than the over the top, sometimes cartoonish monster you’d run into in other survival horrors.

The film’s quiet nature makes its main antagonist feel even more menacing. Sometimes it’s not the actual shark attack that provides the tension, it’s the waiting, which plays out as an almost intentional psychological game the shark plays on its victims, seasoning its food with more fear to make its dinner that much more delicious. ‘Great White’ isn’t flawless, and doesn’t necessarily reinvigorate or redefine the genre, but at the same time it doesn’t set out. You get the impression that all ‘Great White’ is interested in is providing its audience a fun but terrifying time, and in that regard, Wilson succeeds.

‘Great White’ Spends Its Time With Its Victims

The killer shark makes its grand entrance into the movie with a horrific scene that sees it preying on an innocent couple swimming in its waters by the quaint island known as Hell’s Reef. It feels personal the way the shark pursues its food while the couple is at the height of their romance. It’s as though the shark isn’t just there to kill its delicious meal, it’s also there to kill the moment between two beautiful lovers. After the shark has its way with its food, ‘Great White’ introduces us to the cast we’re supposed to take a deep dive into these shark-infested waters with. Katrina Bowden plays Kaz Fellows, a nurse who helps her boyfriend, Aaron Jakubenko’s Charlie Brody, run his charter plane business.

During this period, ‘Great White’ sits us down with Kaz and Charlie so we can get to know our love-struck tour guides, that way it’ll hurt that much more when it decides to rip our hearts out. They paint enough of a picture of their relationship to let the audience know that Kaz is a workaholic, their business is suffering financial troubles big enough to jeopardize Charlie’s company, and nearly convinces me personally that the two might be the most perfect couple known to man. Fortunately, their prayers are answered when Charlie receives a call from a rich married couple, Tim Kano’s Joji Minase and his wife, Michelle Minase played by Kimie Tsukakoshi. The Minases are interested in their services, and Charlie is more than happy to oblige.

From there, Charlie, Kaz, and Charlie’s friend Benny, played by Te Kohe Tuhaka, who’s the charter chef responsible for feeding their customers, escort the Minases to Hell’s Reef, an island that Michelle is eager to visit for personal reasons later explored in the movie. But due to a series of unfortunate events and questionable decisions, the trip doesn’t go as planned, and soon our five protagonists find themselves stranded on a life raft out at sea, being stalked and antagonized by the same hungry shark that assaulted the hopeless romantics we met at the start of the film who’s now coming back for seconds.

By the time the shark is circling around Kaz and her crew, we have just enough emotional investment in these characters to care about what happens to most of them, which makes the time we’ve spent in the beginning with the two couples and Benny a bit worth it. Wilson also offers ‘Great White’ a deeper meaning by giving its characters, Charlie and Michelle specifically, backstories that feel connected to the harrowing experience they later find themselves in. In addition to flying charter planes, Charlie is a Marine biologist that survived an encounter with a shark once before, which led him to the love of his life in Kaz. Michelle’s family history also has an intriguing connection to Hell’s Reef, further tightening the bond between these characters and the ocean they’re at mercy to. These small details add a bit of depth to their situation that acts as both foreshadowing and an almost eerie feeling that their predicament is meant to be.

At the same time, the film pretty much broadcasts the outcome of certain victims based on their personalities in a predictable order, which cuts the momentum of the film a little at the legs. ‘Great White’ also teases emotional tension between two characters that don’t feel natural and lacks a certain level of authenticity to add gravity to the conflict. It doesn’t help that this conflict ends up in a pretty unsatisfying place, making it feel cheap and pointless, as it’s not so much resolved as it is dropped. Certain characters can also come off as a bit one-dimensional while experiencing no real growth through the course of the film.

They portray Joji as the typical rich snob with an air of arrogance about him that tastes bitter if you breathe it in. Given the circumstances, it would’ve been nice to see some sort of development in Joji’s character, but his personality never really grows with the experience, which I couldn’t help but feel might have been a missed opportunity. Benny just seems to only be there to add one more body for the audience to worry about, and although Michelle has potential, her own character arc doesn’t plunge as deep into its potential as I would’ve liked it to.

Wilson Does The Best He Can With What He Has

‘Great White’ is a very minimalist film. Everything about it is small and limited, from the cast involved to the set pieces, and yet Wilson is still able to provide a lot of adequate scares just by being cerebral and tactical in its horror. The shark always loves to make an entrance, making sporadic appearances throughout the narrative that don’t have a theme song to announce its arrival. Wilson does a good job using traditional, classic horror methods to sustain ‘Great White’s’ tension and have the audience guessing when and where his killer shark will strike next. His camerawork also somehow makes the environment around Kaz and her crew feel tight and small despite the vastness of the ocean, highlighting just how trapped our characters are. At the same time, there are certain shots where Wilson pulls back on the camera and truly demonstrates the ocean’s depths and expansiveness, almost framing the ocean as much of a monster as the sharks it gives birth to.

Despite the suspense, ‘Great White’ does seem to drift off a little in the middle. Sometimes the movie just seems to be filling time at the halfway point, stalling the audience until it’s ready to deliver its action-packed third act. There are also certain narrative decisions made in ‘Great White’ that came off as a bit too cliche, and although it can be a bit difficult to surprise audiences when dealing with this kind of horror genre, I do believe that Wilson could’ve put a bit more effort in subverting expectations.

‘Great White is a survivor horror film that knows exactly what it wants to do and does it well. It’s honest with both itself and its audience, with slight hints of a greater film somewhere in there with unique ideas that it never really takes advantage of. If you’re into smaller films, and you’re feeling a bit nostalgic about the days where sharks were frightening enough in movies just being sharks, then this is definitely the film for you.