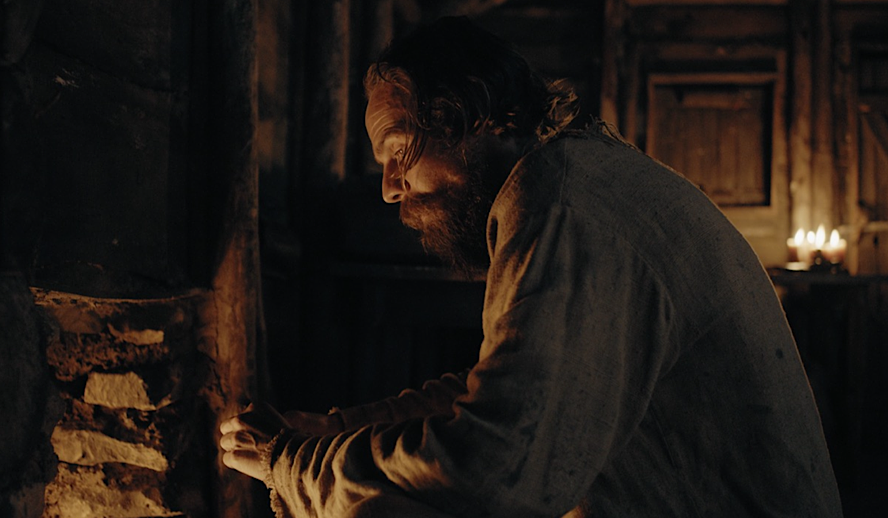 South African director Jaco Bouwer’s first-feature film ‘Gaia’ (2021) is a project lodged within a series of contradictory creative crossroads. It painstakingly belabors itself as a primeval ode to the power of nature while at the same time filming on digital cameras that cast a distractingly unnatural glossy haze upon the film and the forest it is set in. The film also struggles to distinguish itself within the low-budget terror-is-within thrills of films like Trey Edward Shults’ ‘It Comes At Night’ (2017) and Eduardo Sanchez and Daniel Myrick’s ‘The Blair Witch Project’ (1999) or the grotesquely over-the-top body horror of the likes of George A. Romero and David Cronenberg. Layered on top of all these confusing tonal discrepancies is a seemingly diminutive budget that crumbles under the weight of lofty mythology that is likely to leave audiences desperately clawing for more in the worst way possible.

The film loosely centers around the endeavors of an injured forest ranger on a fated surveillance mission in a nameless primordial forest who comes across a pair of mysterious survivalists that help nurse her back to health. The ranger, played by Monique Rockman, quickly discovers that the father and son duo portrayed by Carel Nel and Alex van Dyk harbor a mysterious religious reverence for nature that they claim keeps them safe from the horrors of the forest. Once post-human creatures begin terrorizing the group and Rockman loses contact with her partner played by Anthony Oseyemi, ‘Gaia’ unloads a disorganized thesis on the ecological tyranny of mankind in the wake of the Industrial Revolution and the potential of nature to fight back.

One of the clearest standouts from ‘Gaia’ is the gripping dread-soaked score composed by Pierre-Henri Wicomb. Even if the action on-screen can verge on incomprehension, the music reliably keeps the audience in their seats and injects a much-needed sense of urgency into the plot that keeps the film’s momentum from running stale. Of all the film’s various components, technical and otherwise, the score feels the most rooted in the naturalist notions ‘Gaia’ attempts to convey. Much of the auricular tension is derived from a recurrent ominous wail that is at once an unwaveringly wild screech and an ethereal instrumental strumming.

As for the visuals, there is an aforementioned divide between the film’s naturalistic ideals and the illusory veneer of the resoundingly muted cinematography. For fear of reigniting a deeply contentious debate that has rattled around the movie industry for the past five years, it is hard to ignore the fact that this film would have benefited greatly from being filmed on actual film. While there are a vocal few within Hollywood who have risen as heralds of digital photography like Steven Soderbergh, Matt Reeves, and James Cameron, many experienced filmmakers have remained staunchly opposed to the dissolution of film. Quentin Tarantino, one of film’s most steadfast champions, said of digital filmmaking, “If I can’t shoot on film I’ll stop making movies… The fight is lost if all we have is digital, DCP presentations. To me, that’s just television in public.”

While Tarantino certainly did not have ‘Gaia’ in mind when he made these remarks, his takedown of digital photography is certainly applicable. While film may work wonders for some intrepid directors or highlight impressive CGI, ‘Gaia’ benefits from neither of these factors and struggles to justify the hyperreal camera effect.

Impressive Creature Effects Suspiciously Reminiscent to ‘The Last of Us’

The area in which the film has received the lion’s share of its praise is within its predominantly practical creature effects. The fungi-infused monsters that lie at the heart of the film’s mystery remain sincerely scary in the little time they are on screen, even if the audience is only treated to half-blurred shaky camera angles as soon as they arrive. The effects used on crafting the look and terror of the deadly fungus are great across the board, transforming the admittedly silly conceit into a truly spine-tingling body-horror jaunt. Where these effects may run into some trouble though is in their unmistakable resemblance to the half-human creatures and malignant spores of Naughty Dog’s generationally acclaimed ‘The Last of Us’ video game franchise. ‘Gaia’ can at best be accused of borrowing broad creature models and infectious story beats and at worst be charged with lifting the exact premise from the immensely successful series of games.

Most films with a cast composed entirely of uncredited actors are sure to run into a few issues when it comes to likability and believability, but the crew in ‘Gaia’ are in no way helped by the confusingly vague characterizations found within the script. The most backstory the audience receives for Rockman’s Gabi, the film’s central protagonist, is a brief scroll through her phone’s nondescript photo reel featuring a few selfies and enthusiastic thumbs-up. Somehow the only fact ever revealed about Oseyemi’s Winston is that he knows a guy, who knows a guy, who knows a guy that knows where to purchase dijon mustard. Although it could be claimed that this ambiguity is in service of the films supposed surreal magic, it ultimately serves to alienate the viewer from the characters on screen and leave them scratching their heads at some of the more nonsensical personal decision-making towards the film’s conclusion.

As if the decidedly lackluster script was not frustrating enough from a character perspective, it additionally muddies a potentially important message about nature’s untapped power to fight back against those who have wronged it. The connection to the current state of the world’s climate and the drastically negative effect that humans have inflicted upon it is unavoidably obvious yet somehow largely unexplored. In a film that supposedly centers upon a dutifully pissed-off Mother Nature, the closest thing the viewer ever sees to this effect are some ashen mushrooms and a shimmering red light cascaded through the branches.

Instead of the indefinite rant, Nel’s Barend launches on about the perils of modernity and the plight of industrialization, the film could have connected itself to the real-life climate crisis through more than words, offering a window into what might be unleashed if the course is not corrected. Very few issues hold as much pressing importance than that of climate change, and while it is admirable of the film to attempt to start a dialogue, it ultimately misses the mark.