‘Scenes from a Marriage’: The Gold Standard of Relationship Analysis 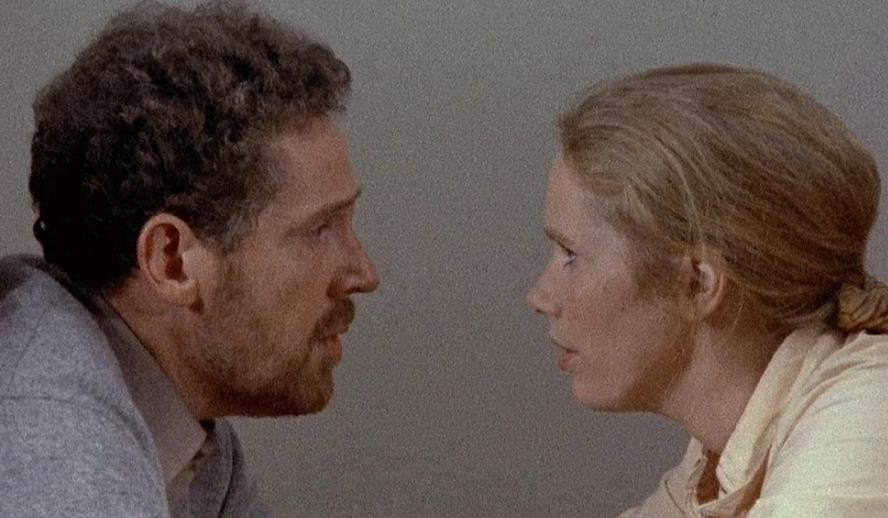 Photo: ‘Scenes from a Marriage’/Sveriges Radio

Please note that this is a review of the mini-series, not the theatrical version.

With the announcement of its premiere at the Cannes Film Festival and last week’s trailer drop, anticipation for Mia Hansen-Løve’s newest film ‘Bergman Island’ has grown immensely. The former actress’s third film to compete at the festival tells the story of a filmmaking couple who make a pilgrimage to the Swedish island of Fårö, affectionately known as Bergman Island, where the master of Cinema Ingmar Bergman lived and worked. Among his films shot there: ‘Through a Glass Darkly’, ‘Persona’, ‘Hour of the Wolf’, ‘Shame’, ‘The Passion of Anna’ and of course, ‘Scenes from a Marriage.’

Such sacred ground for cinephiles, nevertheless the vibes from such films are not particularly rainbows and sunshine. In the trailer, Vicky Krieps’ character remarks “you do realize we’re going to sleep in the bed where they shot ‘Scenes from a Marriage’?… We have to maybe sleep in the other bedroom.” Not only were all the country house scenes in ‘Scenes from a Marriage’ shot in Fårö, but each episode’s end credits are read aloud by the narrator who informs us we are looking at images of Fårö.

‘Scenes from a Marriage’

‘Scenes from a Marriage’ is a 1973 television miniseries written and directed by Bergman. It stars Bergman’s longtime partner Liv Ullmann and Erland Josephson as the couple at its center, Marianne and Johan. The six episodes in the series follow Marianne and Johan’s complex relationship as man and wife, divorcees, and lovers, the line between each of these statuses often being blurred. It’s a character study so nuanced and with such beautiful performances, its authenticity and importance are undeniable from the first quasi-idyllic five minutes. A three-hour theatrical version was also released in 1974, and Bergman’s last film was its 2005 sequel ‘Saraband.’

With long conversations about ridiculous relationship norms and the complexity of two bound souls, it’s easy to see the influence ‘Scenes from a Marriage’ had on such films as the ‘Before Sunrise’ series, divorce films such as ‘Marriage Story’ as well as several of Woody Allen’s relationship-focused films. The series is notorious for leading to a significant rise in divorce rates across Europe. A strange phenomenon considering the plotline, it almost makes one wonder whether people believed a divorce would lead to a better relationship with their spouse. Then again, it’s hard to say because of the variety of different perspectives on marriage the series expresses. In an unfortunate confirmation that originality is dead, an upcoming English language remake starring Oscar Isaac and Jessica Chastain is set to premiere on HBO Max this year.

Marianne and Johan lead a typical life. An ideal nuclear family in 1970s Sweden, they have a Volvo and a country house (on Fårö). Marianne is a divorce lawyer and Johan is an associate professor and researcher. They have two daughters, whom we only catch a glimpse of in the first episode, in fact, the majority of the series is composed of scenes exclusively with Marianne and Johan. They have both sets of their parents with whom they alternate dinners every Sunday. One night, Johan admits he is in love with another woman and that he is leaving Marianne and the girls for Paris with his mistress the next morning.

All this “stuff”, (best word for it) is utterly important, as Marianne puts it, their sense of security was based on externals: friends, family dinners, holidays, food. Speaking of food, they eat, a lot, sometimes multiple times an episode. Nothing bad ever happens when they’re eating and the prospect of going to dinner is often an escape technique. In fact, Bergman plays with this motif, you can see how uncomfortable Johan is and how enthusiastic Marianne is while eating the dinner right before he tells Marianne about his plans to abandon her.

Security and the Self

What is it about food that makes people feel secure? A simple and easy shared experience you know you’re supposed to do with your significant other and family? A physical sensation that is necessary and easy to experience with no effort, unlike other such physical sensations that usually make or break a relationship? Bergman doesn’t shy away from his belief that sex is the defining factor in many relationships, but if someone spends all their time taking the easy way out, i.e. dinner after dinner, when do they get to express themselves and explore how they work with one another? It all comes down to the fact that Marianne and Johan entered this relationship unprepared to do work on themselves and asleep to the fact that who they are, and what they value is going to change.

Bergman explores Marianne’s complicated past in an unforgettable sequence of her reading her journal and explaining that all signs of protest in her were shut down as a child, conditioning her to a lifestyle in which her social status was her only status. Johan is certain he is through with family life, he is above it. But once his luck changes, it is too late, Marianne has done the necessary soul searching to be free of any need to be married to him.

And yet, they can’t leave each other alone. Malicious words, a physical fight, and humiliation on both their parts, can’t keep them apart. After separating they are hotter for each other than ever, and even beyond the bedroom, they seem to be more interested in each other’s inner thoughts and feelings, things they hid before. The last moments on Fårö are undeniable, they are just two people who are as close to being soul mates as anyone can be in the real world. That doesn’t mean being together, marriage, fidelity, or children, just two people who can’t seem to live without each other.

Although most moments take place within Marianne and Johan’s relationship, when the series does show us other relationships, it works so well to get the audience thinking without taking them away from the main action. There’s for instance the theme of truth and telling it, and how Marianne’s old-fashioned parents were happy despite not telling the truth. There’s also the woman who comes to Marianne for a divorce who admits that she and her long-time husband are on good terms and she is not sleeping with anyone else, but she never loved him and has an entire life to live before it’s too late.

When one takes into consideration the gorgeous work of cinematographer Sven Nykvist, a frequent collaborator of Bergman’s, ‘Scenes from a Marriage’ becomes an even greater masterpiece. The close-ups are heartbreaking at times, and the way Bergman and Nykvist utilize tracking shots are so effective in creating a sense of fun suspense.

A warning against security, a meditation on whether anyone can be sexually satisfied by one person, a deterrent against being legally bound to someone no matter how much you love them, who knows what it is that we are really supposed to take away from ‘Scenes from a Marriage?’ The beauty of ‘Scenes from a Marriage’ is that it never hopes to be a sermon, rather an analysis of what keeps two people together or apart.

Stream ‘Scenes from a Marriage’ on HBO Max.