‘Food Club’: A Danish Travel Film of Women in Their 70s Living Their Italian Cooking Dreams 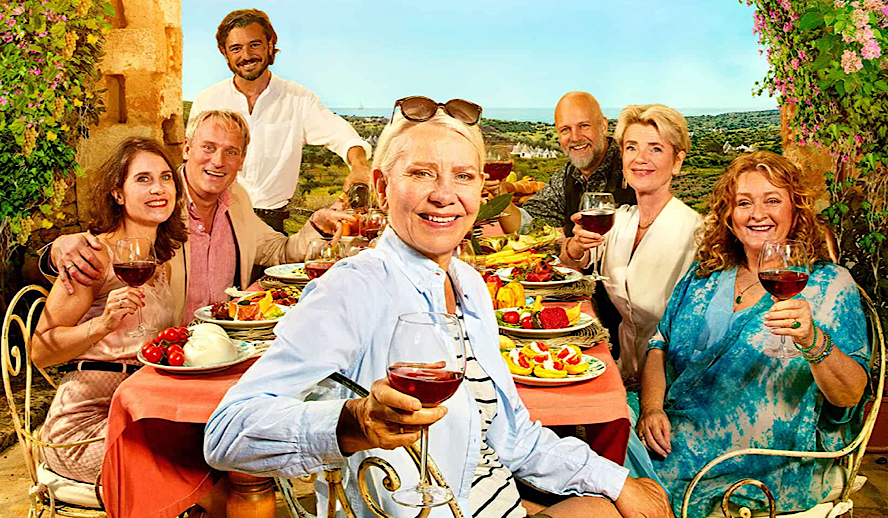 Let me start off by saying I love Italy, I love comedies, and I love food, so I was fully looking forward to diving into this movie. I rented this film without even bothering to watch the trailer and while it started off extremely promising, around mid-way through I found myself questioning how I felt about the characters and their respective storylines. While it was extremely close to what I wanted it to be, it just didn’t exactly do the trick I was hoping for. The film really tried to throw in a few life lessons, some romantic storylines, and some risqué jokes that ultimately fell flat for me, and I’m here to explain why.

Related article: A Tribute to Mads Mikkelsen: How the Delectable Dane Conquered Hollywood

Related article: Oscar Buzz: Mads Mikkelsen Swaggers Into Our Hearts in the intoxicating Danish Hit ‘Another Round’

‘Food Club’ – Is this just another travel film?

‘Food Club’ is a Danish film directed by Barbara Topsøe-Rothenborg (‘One-Two-Three Now!’) that follows three women nearing their 70’s who have been best friends since childhood. While they have made a point to reunite at least once a year around Christmas time, their individual lives continuously get in the way and it becomes more difficult for them to find time for each other. That is until Marie (Karoline Hamm) is gifted a weeklong cooking course in Italy for her and her husband Henrik (Peter Hesse Overgaard) who viewers quickly find out has been having an affair with a younger lady living a few streets over.

A heartbroken Marie eventually makes time to meet up with her two best friends for lunch, Vanja (Kristen Oleson) a stubborn homebody who often spends her time with her dog and a bottle of wine next to her late husband’s gravesite, and Berling (Stina Eklad) a lavish and sometimes vulgar woman who seemingly forgets how to act her age which has subsequently driven a wedge between her and her daughter. Marie tells her pals about her husband’s affair along with the trip she was given for Christmas for her and Henrik. After some bickering and convincing, the three instead decide to embark on this trip of a lifetime together, minus the men (or lack thereof) in their lives.

The trio travels from Denmark to the beautiful Italian countryside where they stay in an exquisite rustic villa and learn to cook from the adorably passionate chef, Alessandro (Michele Venitucci). For most of the film, the three women have trouble living in the moment because they are too busy worrying about their lives back home. Marie’s behavior resembles a teenager as she is glued to her phone for most of the film hoping her husband will reach out to her, Berling can’t help but flirt with every Italian man she comes into contact with and resents the rocky relationship she has with her daughter, while Vanja can’t let go of her deceased husband even when a lovely man who is also staying in her villa attempts to pursue her. Over the course of a week, the three women lean on each other as they attempt to put to rest their past demons and seize the moment.

Why this film didn’t quite hit the mark

Like I mentioned before, I love watching anything that takes place in Italy. This may be one of the many reasons I have seen ‘Call Me By Your Name’ more times than I can count on my two hands and why the eighth episode of ‘Normal People’ remains my favorite. What I can confidently say was my favorite part of this film was that it allowed me to feel as if I was living out my Italian cooking dreams vicariously through these three women.

With the gorgeous scenery, deliciously colorful food, and authentic architecture it really painted a picture of the magical place they were vacationing in. So much to the fact that I even searched the web for weeklong cooking courses in Italy once the movie was over. While I thoroughly enjoyed the Italian landscape, cooking scenes, and wine stomping adventures, I regret to admit that I found many more weaknesses than strengths to report.

With many romantic comedies, the ending is often predictable which I can confirm is the case for ‘Food Review’. In the first quarter of the movie, the characters seemed promising and charming but sometime around forty-five minutes in, I felt as though the three women became unlikeable at times. Seeing Marie, an almost seventy-year-old woman glued to her phone to check her husband and his mistress’ Facebook status every few minutes seemed very unrealistic and Berling’s vulgar language, love for sex and marijuana I also found to be odd, given the  assumed target audience. I understand they were all going through their own personal and quirky stumbling blocks that they ultimately needed to work through to reach a happy ending, but in my opinion the hang-ups were a little overboard and it took too long to get to the payoff.

I often have believed that films of this sort where characters are expected to “find themselves” by the end are tricky to nail. This genre is often exhausted and there are simply so many films with such similar storylines they all start sounding the same. Coming up with an original idea that also isn’t too farfetched to deter viewers can be difficult. Unless it is executed just perfectly, people are bound to critique where the film went wrong. I believe ‘Food Club’ was on the right track to being unique, especially with its attempt at making an older cast more youthful with their sultry and sometimes vulgar use of language and various subplots, but ultimately this film still didn’t quite play out the way I hoped it was going to.