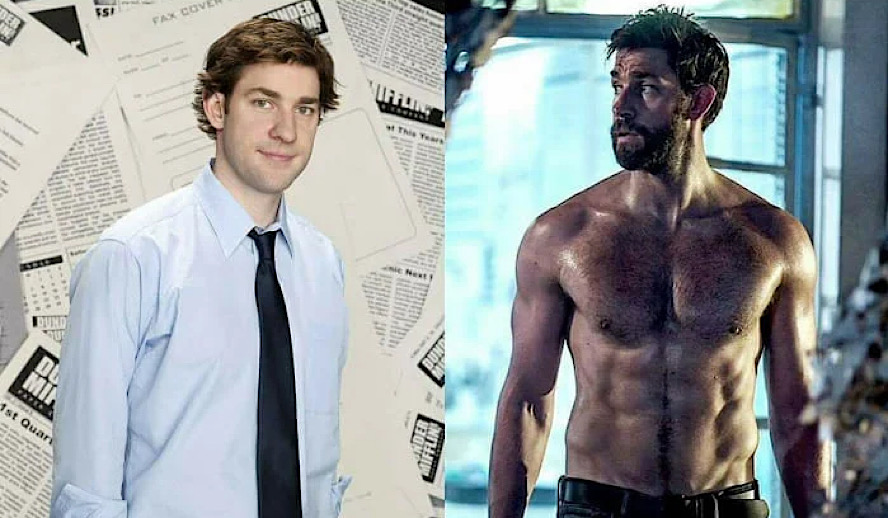 Do you ever watch a movie and just can’t focus on the plot because there’s just one actor who you can’t unsee in a previous role? Sometimes actors play roles too well. Breaking out of that one character that earned an actor their Oscar, Emmy, or cultural recognition can be just as difficult as breaking into the industry in the first place! Here are six times that actors broke out of their expected range, genre, or character type by playing unexpected roles.

Known for his killer presence in the cultural hit ‘The Office’, John Krasinski rose to fame with his hilarious depiction of Jim Halpert. Staring opposite Jenna Fischer (Pam), the romantic tension of their characters in the show alone was enough to fuel the show’s nine seasons. With Jim Halpert being a witty prankster with an impeccable through-line of dry, relatable humor, seeing John Krasinski play gun-slinging Jack Ryan in the Amazon Video series is quite jarring.

Dr. Ryan is a CIA analyst who finds himself in the middle of an operation to track and stop the frontman of a terrorist organization planning an attack on the west.

What’s spectacular about Krasinski’s performance is that he completely steps out from Jim Halpert’s looming shadow by playing a character under circumstances that couldn’t be more opposite the resident workplace clown. Playing this character was a good move for the Brown grad as the role opens a whole new world of potential for Krasinski.

Known for her portrayal of complicated maternal figures like Rose Maxson in ‘Fences’, Susie Brown in ‘Get on Up’, and Mrs. Miller in ‘Doubt’, the Juilliard grad is a master of drama. Arguably made most famous in her roles as Aibeleen Clark in ‘The Help’ and Analeese Keating in ‘How to Get Away with Murder’, Davis knows how to deliver a tear-jerking performance.

So to see her in Steve McQueen’s ‘Widows’ was truly something to behold. Playing a troubled wife who lost her husband (Liam Neeson) who was entangled in serious criminal activity, Viola shines as her lioness instincts jump through the screen in the film.

Also featuring Cynthia Erivo, Michelle Rodriguez, and more, the film proves that women can be just as good (if not better) than their male counterparts in action films. Viola has the experience to play any character and it’s terrific to see her in a role that showcases more of her hefty range.

The Hollywood sweetheart rose to super-fame with his portrayal of Noah in arguably one of the most romantic films of all time, ‘The Notebook’. Playing the scrappy love interest to Rachel McAdams’s character Allie, Gosling’s performance set him up to be the ‘It’ boy of the early 2000s. His role in ‘Blue Valentine’ is not unique because of its grittiness (Gosling had already proved his magnificent dramatic acting chops in the likes of Henry Letham in ‘Stay’ and Dan Dunne in ‘Half Nelson’). What’s unique about his portrayal of Dean in ‘Blue Valentine’ is his ability to believably play age in the film.

A movie primarily about the parallels between growing old and growing in between what it is you, love, Gosling (prosthetic receding hairline and all) encapsulates the pain of a man who did everything for love-, just to come out empty-handed on the other side. The surprise is in the eventual sacrifice of his commercially famous boyishness for a performance that would propel his career as a serious and dedicated actor.

With a strong connection to his silly side, playing characters like the famous Michael Scott in ‘The Office’, to his iconic roles in ‘The 40-Year-Old Virgin’ or ‘Anchorman’, to voicing the diabolical Gru in the ‘Despicable Me’ series, Steve Carell has his foothold in the comedic genre like nobody’s business. Seldom playing serious characters, it’s always a shock to see Carrell embrace his serious side. The film is based on the memoirs by real-life father and son David and Nic Sheff.

Carell plays David Sheff, a father struggling in rekindling a relationship with his son stumbling through drug addiction. Carrell’s performance unexpectedly takes audience members on an emotional expedition through the unknown tribulations of familial suffering and tested fatherly strength. Displaying a fitting salt and pepper, his age is a reminder that the actor has more experience in the game than you may realize; Carrell’s performance was a surprise reminder that the actor still has his dramatic chops.

The young actor has been the source of quite the buzz these past three years and with good reason! The New York native got his fame from his astounding performance of Elio in the Luca Guadagnino-directed ‘Call Me By Your Name’.

Hollywood placed the heartthrob in a variety of angsty roles, like his characters in ‘Lady Bird’, ‘Hot Summer Nights’, even in one of his first roles, ‘Miss Stevens’, playing opposite Lili Reinhart. But it’s his regal restraint in ‘The King’ that begins to display more of the young star’s limitless potential.

In his first-period piece, Timothee proves that he can handle complicated subtext in the David Michod–Joel Edgerton film based on William Shakespeare’s ‘Henriad’. Adopting a British accent and an unnerving abstemiousness in his performance, Chalamet distinctively defends his place in contemporary Hollywood royalty in ‘The King’.

Related article: Timothee Chalamet & Robert Pattinson Starrer ‘The King’: A King Has No Friends – Defined By Silence And Color

Watching the trailer for Ma was so astounding because the movie in and of itself was groundbreaking for Black women in film. We need more diversity in the horror genre and ‘Ma’ is a step in the right direction.

It’s difficult to break the mold in Hollywood, and this is especially true for Black women; Spencer in ‘Ma’ was a surprise to audience members, but also a surprise coming from Hollywood. Every time an actor steps outside their box, it’s a testament to how open-minded we truly are as viewers. Spencer is electric in ‘Ma’ and watching her perform is a dream come true every time.