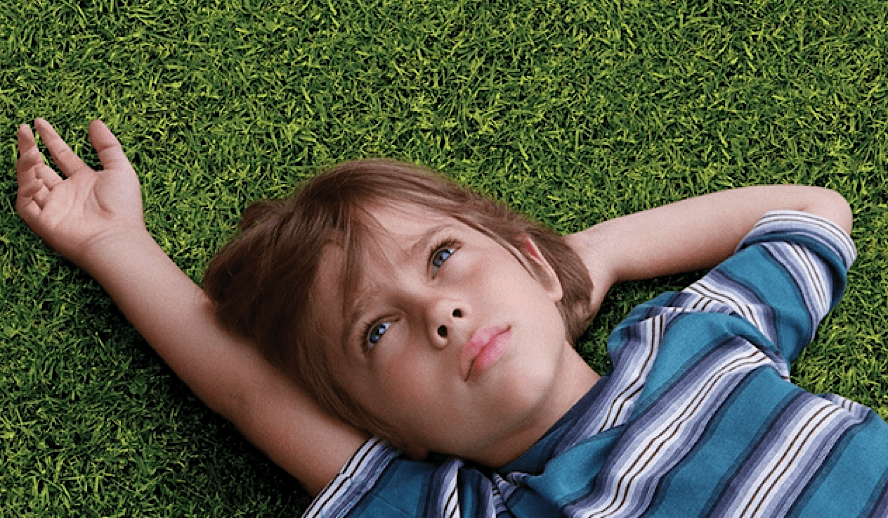 There is no universal truth in this world besides change. No matter where someone comes from, this is something that is a fundamental part of every human life on this earth. As you grow and change as a person, everything around you changes as well, such as your family and loved ones, your environment, cultural norms, everything. Most people do not sit back and appreciate this journey and everything we experience as we go through life. Here is Boyhood to touch your heart and send you down a wave of emotions and nostalgia.

Boyhood (2014) is a coming-of-age story of a young boy named Mason as he grows from a young child to a college freshman. The movie is directed by Richard Linklater, and stars Ellar Coltrane as Mason and veteran actors Patricia Arquette and Ethan Hawke as his parents. The most interesting thing about the movie is that it is shot in real-time, over the course of twelve years, following the growth of six-year-old Coltrane up until he turns eighteen. The movie achieved great critical acclaim for this novel concept. In addition, Patricia Arquette’s performance as the sensitive and flawed mother Olivia earned her an Academy Award, a Golden Globe as well as a BAFTA.

Related article: The Films with the Best Dialogues

Linklater has always been inspired by the simplicity of real life. In his perspective, life itself is amazing, heartbreaking, and engaging enough to inspire art. He has drawn experiences from his life for his previous films as well; such as his romantic trilogy called Before Sunrise (1995), which is about two travelers spending twelve hours stuck in Vienna. He based this storyline on a real encounter he had with a woman in 1989 in Philadelphia.

The film Boyhood is also loosely based on his own life, growing up in Huntsville, East Texas. He explores the evolution of Mason in a family setting and environment similar to his own. Due to the movie being made over twelve years, there were a lot of unique filmmaking choices that were made to ensure the flow of the movie is cohesive. He has talked about how he had to leave his movie in the hands of a 6-year-old’s twelve-year long commitment, but he felt that since his parents were artists, they would be cooperative and understanding of his vision as a fellow artist.

The screenwriting has an extremely natural air to it. The movie started to film without a completed script, which is not a common occurrence. Linklater wanted to incorporate real-time growth of the characters as well as the cultural elements of each point in time to lend authenticity to his project. Scripts for multiple scenes were finished only the night before. He also incorporated the lead actor’s personal growth into the script, which gives an elevated shade of realism to the storyline and the dialogue.

There is something beautifully understated about the direction. The movie is shot in a simple 35mm format throughout, even in modern scenes, to ensure visual continuity in the final cut. . The movie feels very “un-directed,” but this element is executed purposefully. It is meant to portray the undirected nature of real life, where things happen naturally and in an unplanned way. The audience feels like they are simple spectators watching the life of this boy and his family in a pure unadulterated form.

Linklater has cleverly used every natural element available to him to showcase the true protagonist of the story: the passage of time. Shooting this movie over twelve years allowed him to incorporate the real-time cultural elements of the environment such as timely fashion choices, music (Lady Gaga when she broke out on the scene), the release of Harry Potter and the Half-Blood Prince, and many more. On top of natural physical changes in the actors due to the long time range of shooting, hair plays a big role as a prop for character evolution. The audience sees major differences in hair symbolizing the character’s growth and the change in their phases of life. Mason grows his hair out as a teenager and his sister Samantha colors her hair pink in her teenage phase. The character we see this the most in is the mother, Olivia: she cuts her hair increasingly shorter as she goes through moments of loss in her life (such as moving and divorces) and she starts to grow it out when she starts finding her balance in life again.

The extraordinary nature of ordinary life

The movie feels like a bird’s eye view into the ordinary, yet extremely intimate and personal. By watching Coltrane’s physical growth juxtaposed with Mason’s personal growth across twelve years, the audience develops a true connection with his character. They feel a glimmer of what a parent would possibly feel to watch their child grow up before their eyes and hit important life milestones. There is something extremely emotional and moving to watch something as simple as a young boy growing up. You start identifying yourself and your own personal journeys with whichever character you relate to the most in the family, reminiscing about all the experiences you have been through. The movie has an undertone of catharsis, as this is the director’s personal catharsis for his own volatile childhood. It is also a love letter to his parents and their growth through the years as they dealt with their own demons while raising two children they poured their heart and soul into.

At face value, it can seem to be a meandering piece of filmmaking leading up to no particular event. Following the boy’s life and watching the mundanity of everyday life, you become quite certain that there is not going to be an “explosive climax” in the end. It is easy to lose the point of the story. The movie starts to remind us what it is truly supposed to be about as it is nearing the end by incorporating subtle reminders of how much time has passed. One such example is the scene where Ernesto (the maintenance man Olivia gives a fleeting piece of life advice to when Mason was in his early teens) runs into the family as Mason is heading off to college. He now has a great job as a manager of a restaurant after going to college due to her advice. Olivia also breaks down as Mason leaves for college, thinking about how life has passed her by and she has nothing to look forward to.

The movie reminds the audience to value each moment “as it seizes us.” There is a beauty in the mundanity of everyday life which is only appreciated in hindsight. By invoking the sadness of nostalgia in his audience through his movie, Linklater wants us to appreciate these moments while they happen and not when they pass us by.