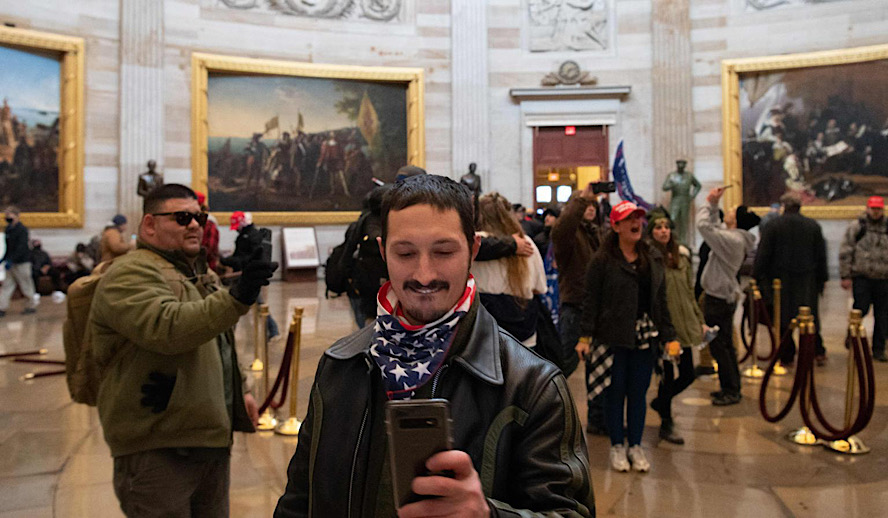 In his last few weeks in office, the twice impeached President Donald Trump went on a futile rampage in an effort to overturn state election results. As Trump stormed Twitter, spreading alternative facts about the election, his followers fell right in line, spreading conspiracy theories about how our recent election was riddled with voter fraud.

Not only are these claims incredibly ironic considering the decades of gerrymandering and voter suppression in primarily democratic inner-city neighborhoods, but in hindsight, they were far more dangerous assertions than many gave them credit for. The result was a clash between our sacred democracy and four years of rhetoric unfolding at the US Capitol on Jan 6th. This attack didn’t come out of left field. It was an amalgamation of social media’s deadliest side effect.

The first line from RnB singer Moses Sumney’s sophomore album ‘grae,’ reads “isolation comes from insula, which means island.” In the album, we find a man processing the nature of isolation and what it means to exist in one of the most isolating periods in world history. And the very thing that we all consistently flock to is the very thing perpetuating our isolation.

Social media has created yet another crisis in our country. As we grapple with truths and lies in our political sphere, social media creates insularity, or viewpoints that are limited, tailored to our personal values, and consistent with what we already want to know, whether it’s factual or not.

For many liberals, the attack on the Capitol seems like it came out of thin air. Suppose your timeline has been swarmed with support for the Biden-Harris campaign and excitement about the coming transition, then, of course. In that case, you could have never known about the hidden network of conspiracies and lies rooting right beneath our democracy. No one could have prepared for an attack of this magnitude when it comes from groups that rely on hiding beneath the surface.

In October 2019, Natalie Bucklin did a deep-dive into right-wing social media groups and found a staggering “network of approximately 19,000 users with high proximity to [right-wing] extremist content.” These accounts ranged from White supremacy accounts to racist troll accounts to accounts dedicated to the infamous Qanon conspiracy, to platforms devoted to spreading the MAGA agenda.

While this blooming network of extremist groups is worrisome, one of the many larger problems lies within the role social media has taken in our country. News operates best when it’s unbiased, nonpartisan, and accessible to all different types of people. Instead, what we’ve established is a system where individuals get to curate their own reality of current events by following incredibly biased accounts, partisan, preying on the fact that subconsciously, everyone wants their perspective to be a reality.

A Web of Lies and Conspiracy Theories

Social media was never intended to be the sole source of information for our worldview. However, a somewhat justified distrust in media outlets has resulted in people taking their news consumption into their own hands. The result is a crisis. Communities are living in their own separate island about the state of the world right now. In fact, there’s currently a rumor circulating in some Twitter circles that the ever-illusive Antifa caused the riot that occurred at the Capitol.

This, of course, interweaves with the much larger conspiracy theory that democrats orchestrated the entire pandemic just to make Donald Trump look bad, which of course becomes entirely believable when you begin to convince yourself that Trump is the second coming of Jesus Christ and his impeachments and national disdain is his metaphorical crucifixion. And no, I didn’t make any of this up.

On Amazon right now, you can find the book titled “Trump: The Second Coming of Jesus Christ,” a book that one would think was satire but turns out to be a completely serious published work. The reviews of the text seem split between those that are furious that it’s a real text and those that agree with the message of the book.

One commenter even prefaced his five-star review (which, if it’s satire, isn’t at all obvious enough to be so) with “… I have always suspected that Donald Trump is the second coming of Jesus Christ, so my review may be a little bit bias towards support of this fact.” He goes on to consider Barack Obama to be the antichrist, and of course, ending with how the recent election was rigged.

These conspiracies spread rampantly on just about any platform with an effective algorithm that recommends content to viewers, especially the likes of YouTube, Reddit, Facebook, Twitter, and most specifically, Parler, a social media platform that has attracted an overwhelming abundance of right-wing users. Although Big Tech like Apple and Amazon have banned together in a rare feat to collectively shun the platform completely off the Internet, the root of this issue won’t be erased until we address it at its core.

The Root of Right-Wing Extremism

Besides social media and the mass spread of misinformation, the attempted insurrection on the United States Capitol is an accumulation of America’s unwillingness to address its domestic terrorist problem. This is due to the fact that it is White people who commit a large majority of our domestic terror.

In order for America to maintain its allure of White elitism, the defacto-racist exercise that justifies White economic supremacy, it can’t address or widely criticize White America. This is why Trump was able to defend the Charlottesville White supremacists, calling them “fine people” and able to tell the Capitol insurrections that he loved them, that they were very special.

Related article: With the Social Media Craze Growing, the More Dangerous the Selfie the Better – Until Danger Becomes Deadly

The deeper issue at hand can’t be solved by banning Trump from every platform we can think of (especially not in his last week of office). We have to nip this problem at the root and begin to address the sources of our nation’s White supremacy problem.

America is a master at redirection. As the news begins to shed light on Trump’s impeachment hearing and Biden’s transition into power, do not forget what Trump has shed light on in his four years as President and what Obama brought to light merely by existing; a significant part of America is steeped in lies, delusion, and racism.

Every time something like domestic terrorism strikes, we bring out our automated responses: “This is not who we are” and “this isn’t the America I know.” It’s time to digest the reality that— to unintentionally quote Donald Glover— this is America. It’s only in addressing this crisis that we can come to a new age of truth and healing.